Hopkinton Historical Society offers exhibits, programs and special events throughout the year for its members as well as the general public. The Society also offers genealogical and historical research to the public. With nearly 400 members, it is entirely supported by membership dues and donations. One of the Society's programs, the 2019 Putney Hill Cemetery Walk, received an Award of Excellence from the American Association for State and Local History, the most prestigious recognition for achievement in the preservation and interpretation of state and local history. Written by Lynn Clark and directed by Beth Spaulding, the play is designed to entertain and educate attendees about those people buried in, or excluded from, its earliest cemetery. It deconstructs the traditional narratives of conflict, racism and misogyny and instead constructs an inclusive, multi-vocal narrative of Hopkinton’s past and present.

The Long Memorial Building, built in 1890 for the Hopkinton Historical Society, was named to the National Register of Historic Places in 1977. 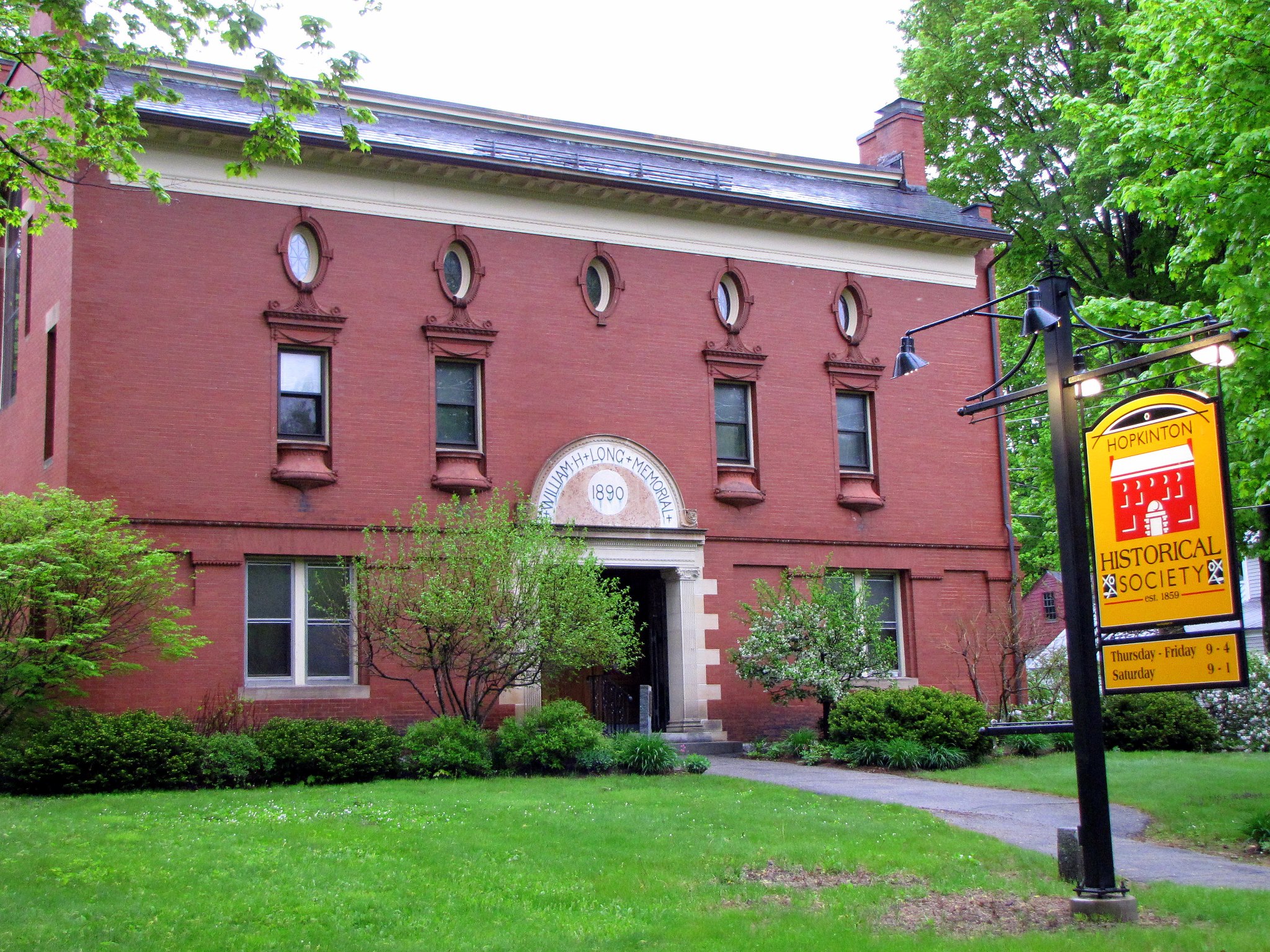 Widely considered to be the first successful globe maker of the New World, James Wilson was born in Londonderry, New Hampshire and moved as an adult to Bradford, Vermont. He was self-taught, producing his first globes in 1810. The first dated edition is the 1811, 13 1/2” style shown here. It accurately depicts the principal places of the known world, including the route taken by Captain James Cook in his attempts to discover a southern continent. Few of his globes are known to exist today. This globe was used for many years in Dr. Ebenezer Lerned’s (1787-1831) Hopkinton Academy. The Society’s 1875 catalogue has the following entry for the globe: “…This Globe was willed by the late DR. EBENZER LEARNED, of HOPKINTON, to STEPHEN SIBLEY, ESQ., in whose Garret it was slightly injured by Rain. When ’SQUIRE SIBLEY died, it was returned, and on the 29th of May, 1873, presented by DR. LEARNED’S Daughters to the PHILOMATHIC CLUB…” The globe was restored in 2008/09 by Northeast Document Conservation Center of Andover, Massachusetts. 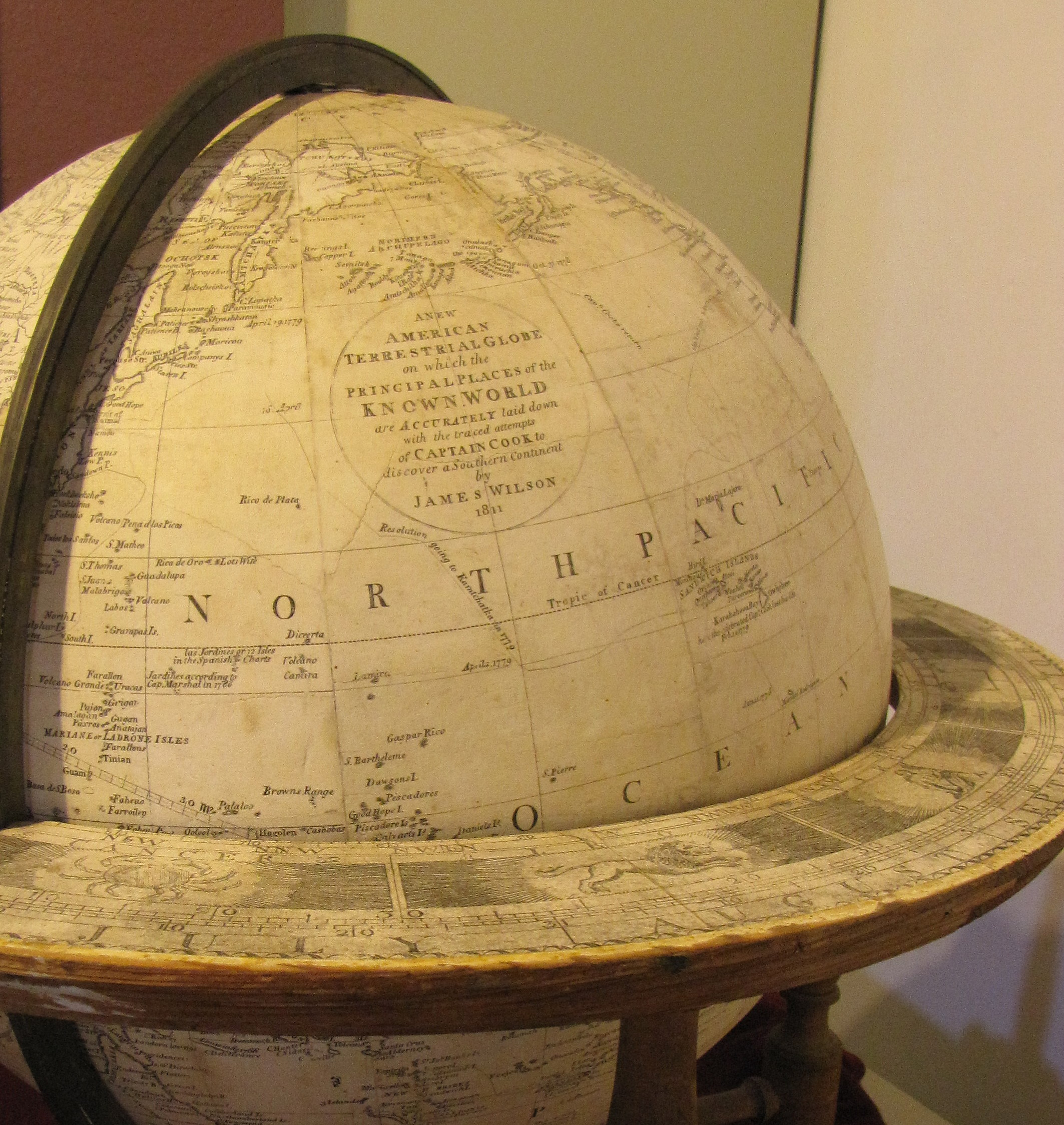 In 1859 three young men from Hopkinton – Silas Ketchum, George Crowell, and Darwin Blanchard – shared an interest in literary and cultural pursuits and formed the Philomathic Club, which means “love of learning.” Of the society’s beginning Silas Ketchum wrote: "‘Tis certain our Club was not designed as a convivial Club. It was not a Debating Club; it was more for conversation, comparing ideas, and literary research and improvement. Questions were not debated among us but discussed."

In 1865 the Club added four members: George Ketchum, Henry Fellows, Calvin Day, and Harlan Gage. Club members met weekly and agreed “the Club should never cease except by unanimous consent; so long as two of its members live, the Club should live.” By 1869 members had published over seventy essays in various New England journals. The interest of the members in all fields of knowledge – literary, scientific, and historical – soon resulted in a growing collection of books, minerals, artifacts, and curiosities. In 1872 when the doors were thrown open to the public, the Club had already amassed some 1,200 museum articles and well over 3,000 newspapers, pamphlets, books, and engravings. The curiosities attracted immediate attention, and additions to the collection came pouring in. Within five years the total number of artifacts was nearly 30,000. Silas Ketchum wrote: “The success of the enterprise has far exceeded the most sanguine expectations of its founders.” He added that it clearly demonstrated what he called, “the existence of that public want which the institution was intended to meet.”

By 1873 the original members, in pursuit of their professions, were scattered and only occasional meetings could be held. It was decided the Philomathic Club should evolve into a larger society whose purpose would include not only collecting, but also the preservation of local and genealogical history. The New Hampshire Antiquarian Society was organized and incorporated in 1875. Work began on the acquiring or borrowing of early and valuable town and county records. Between 1873 and 1883 these records were hand copied by various members and bound in eleven oversized volumes. The collections soon outgrew the rooms in Contoocook, and in 1889 the Society gratefully accepted the offer from Lucia Rollins Long of a permanent home, a memorial to her husband, Dr. William H. Long. In 1890 the Society moved into its present home, The Long Memorial Building, on the main street in Hopkinton.