The St. Thomas Synagogue, founded in 1796, was built and lost to fire several times before its final construction in 1833. The temple was built by (Spanish and Portuguese) Sephardic Jews, who came to the Caribbean to finance trade between Europe and the New World, and is one of five synagogues in the world with a sand floor, representing the sand floors Jews used to stay silent while praying in cellars during the Spanish Inquisition. The formal name of this synagogue is “Beracha Veshalom Vegemiluth Hasidim,” meaning “Blessing and Peace and Acts of Piety.” While Hurricane Irma ultimately failed to damage the synagogue, and the little damage that the hurricane brought was finally restored in 2000, it did cause economic hardships to the citizens of the island as well as the congregation. This impacted the membership because many could not afford their dues anymore. The St. Thomas Synagogue is one of three National Historic Landmarks on St. Thomas Island.

The sand that is on the floor 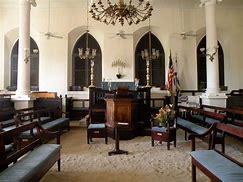 Front of the synagogue 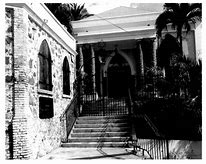 People helping from the hurricane with Rabbi Micael Feshbach 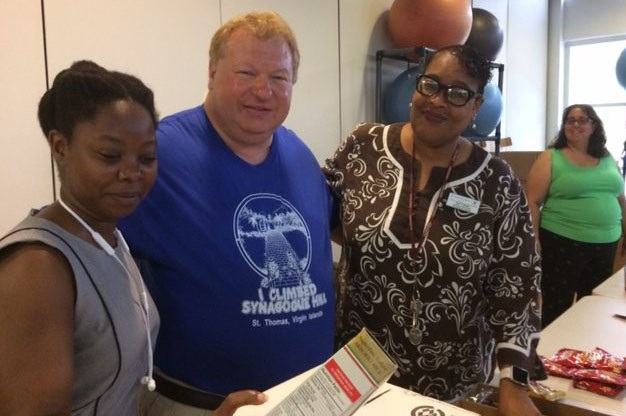 Originally founded in 1796, there were only nine families in the St. Thomas Synagogue’s congregation in 1801, with that number growing to 22 by 1803. Many of these people came from England, France, and the Caribbean islands of Curacao and St. Eustatius, where there was a Dutch colony that supplied war material to the Continental Army. When the colony was destroyed by the British, many of the Jews from St. Eustatius moved to St. Thomas. The place of worship therefore reflects the early Orthodox Sephardic (Spanish and Portuguese) Jews that formed the initial congregation. One of the most prominent features is the sand floor, being only one in five synagogues in the world with such. During the Spanish Inquisition, when Catholic Spain was persecuting and converting all other religions, Jews often chose to practice Judaism by hiding in the cellars of houses with sand on the floor to silence their prayers or face death as punishment. The sand in St. Thomas is symbolic of that action, but it is also speculated that it simultaneously represents the desert Moses and the Israelites trekked for 40 years.

The St. Thomas Synagogue that is currently standing was constructed in 1833, but before that, several other structures stood that were either victims to fire or dismantled. The first fire destroyed it in 1804, and it was later replaced in 1812. After that, the congregation grew too large to occupy the building, and it was dismantled and again replaced in 1823. The synagogue was named Beracha Veshalom Vegemiluth Hasidim, or “Blessing and Peace and Acts of Piety.” When the congregation contained 64 families, a city-wide fire once again destroyed the building in 1831, before its final construction in 1833. In 1833, it was made with bricks and stone to be both fireproof and hurricane-proof, with the stones being locally made, and the bricks traded with Europe for rum and sugar.

The Jews often traded European goods such as iron, wood, grain, and cloth for southern goods like wool, sugar, tobacco, and spices. This trade was productive for family members that still reside Spain and Portugal and the overseas in the New World, Africa, and the Far East. In 1833, the St. Thomas was celebrating the completion of the church, and the European countries enfranchised the Jewish population with full rights and citizenship.

The temple is a one-story structure, with the brick and stone held together by a mixture of sand, limestone, and molasses. Although the walls were originally covered with plaster, there is a legend that children would lick the walls of the synagogue to taste the sweet molasses. The four pillars that support the building represent the four matriarchs of the religion, Sarah, Rachel, Rebecca, and Leah, and were handmade in Denmark from rounded bricks. The benches inside face each other in Sephardic style, and the low wooden walls once served to separate men and women during service. The benches, ark, and bima are all made from the mahogany that was once plentiful on the Island. There is a large chair to the left of the ark, known as Elijah’s chair, that is used for circumcision ceremonies, where it is carried from house to house for the event. It has two historic cemeteries, and some of the chandeliers are still lit by candle.

Aside from the history in the structure of the building itself, St. Thomas’s Synagogue also has a deeply-routed history in events which took place here and its age. It is the second-oldest synagogue in the United States, and the oldest synagogue in use under the American flag. The only Sabbath in which service was not held was on September 15, 1995, when Hurricane Marilyn destroyed the island. It is also the location of the first ever Confirmation ceremony in the Western Hemisphere, which took place October 14, 1843. Hurricane Irma struck St. Thomas on September 6, 2017. While there was not a direct hit to the synagogue, it still acquired significant damage. Under the leadership of Rabbi Michael Feshbach, a Facebook list of items the temple needed such as Neosporin, garbage bags, generators, and dehumidifiers was created. Many people saw it and reached out to their community to help. The hurricane, however, impacted the membership of the synagogue because the declined economy made it hard for many to keep up with their dues.

In 1973, the church arranged to strip the remains of damage that had occurred over time to the outer plaster. 25 years later, they discovered that the plaster walls not only were the epitome of beauty during the temple’s construction in 1833, but were also integral in assisting the foundation. The plaster allowed the inner walls to dry the absorbed moisture without losing any of the wall, but no modern solutions were found for the damage of what they had stripped away. Instead, restoration began on the temple. In 1995-1996, a small museum named after congregation member Johnny Weibel was placed inside the St. Thomas Synagogue and displays Jewish artifacts from the island. Located on the southeastern slope of Denmark Hill in Charlotte Amalie on St. Thomas Island of the U.S. Virgin Islands, the temple was listed in the National Register of Historic Places August 15, 1997. It is also a National Historic Landmark.