The Miracle of Hickory Historical Marker

As American soldiers stormed the beaches of Normandy and liberated France in World War II, the small community of Hickory was planning their own attack against a deadly foe. Citizens of this North Carolina town in June of 1944 were mobilizing not against Hitler's armies, but against the poliovirus which had invaded their community. Citizens came together and built the Hickory Emergency Infantile Paralysis Hospital in a mere 54 hours. During the hospital's nine-month period of operation, over 454 children were successfully treated. The National Foundation for Infantile Paralysis, also known as the March of Dimes, cited Hickory's response as an example of the power conjoined community effort can have in the fight against the disease. The organization also referred to Hickory's rapid construction of the hospital as the "Miracle of Hickory." This historical marker stands in memory of the compassion and timely decision-making that helped the community prevail over this disease.

An image of the "Miracle of Hickory" historical marker. 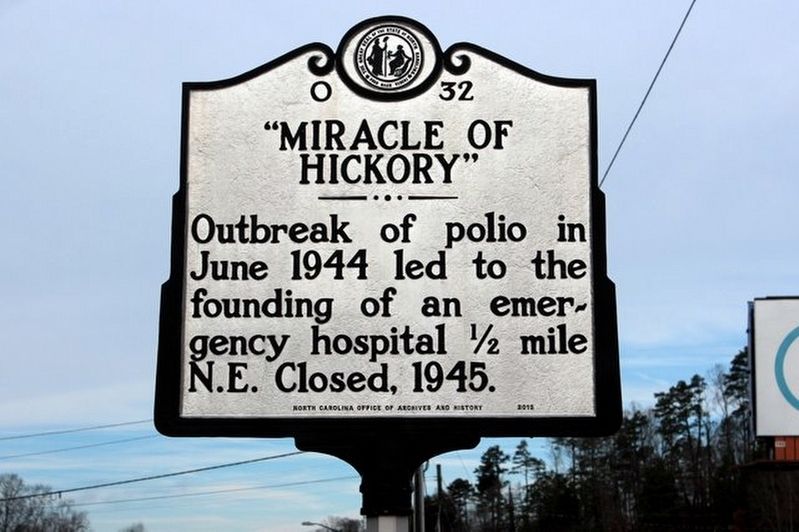 A March of Dimes ad created in support of N.C.'s fight against polio. 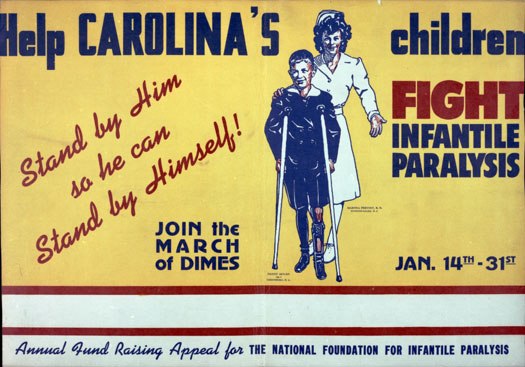 An image of the Hickory Emergency Infantile Paralysis Hospital. 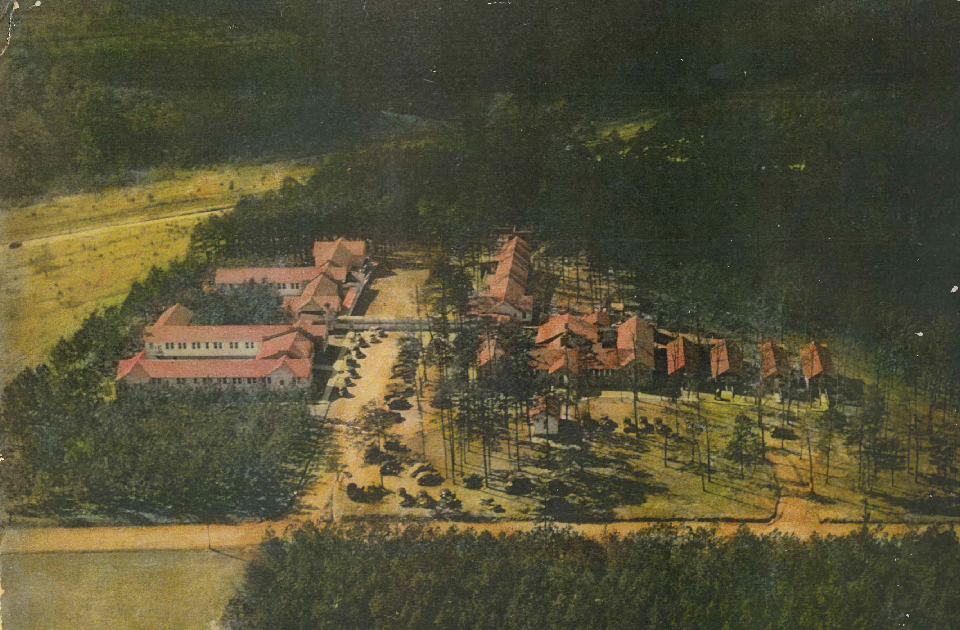 The first case of polio was diagnosed in Catawba County on May 30th, 1944. Within two weeks, 26 more children in the area had been diagnosed with the disease. Polio was also called infantile paralysis because it usually infected infants and young children. The virus attacks the tissue at the center of the spinal cord, causing temporary weakening of the limbs, permanent paralysis every one out of 200 cases, and, in 5-10% of cases, death through the paralysis of breathing muscles. Polio could infect patients for up to 10 days before showing any symptoms and spread throughout the community for as long as a month before a case was realized. Even more terrifying was the fact that people did not know how polio spread. Today, we now know that the virus was likely spread through the linked plumbing/water system that was used throughout the U.S. at the time.

After these first cases were reported, movie theaters, libraries, and swimming pools were closed to attempt to prevent the spread of the disease. Shaking hands and congregating in churches were avoided due to the potential for contagion. Even those driving through the affected towns were discouraged to roll down their windows, as a theory at the time was that breathing the same air as infected people would cause infection. Clearly, the polio virus had a large amount of stigma attached to it, which meant that many parents and children also attempted to keep their symptoms under wraps in fear of ostracism. A major source for the panic during this outbreak was that there was no cure for polio in 1944. Doctors across the United States had tried a number of treatments, including painful surgeries, immobilization of limbs in casts, manipulation of affected limbs, compresses, and even hydrotherapy to attempt to remedy the disease.

As the polio virus continued to spread throughout the western Piedmont region of North Carolina, hospitals in the area became overwhelmed with polio patients. C.H. Crabtree of the National Foundation for Infantile Paralysis, an organization founded by former president Franklin D. Roosevelt, who himself ostensibly had polio, arrived in North Carolina to help prevent further outbreak. Crabtree came armed with three large tents which would serve as polio wards and be staffed by Red Cross nurses and a physical therapist.

As the outbreak continued, Crabtree soon realized that the epicenter of the outbreak, Hickory, North Carolina, had no hospital. Dr. A. Gaither Hahn, chairman of Catawba County Chapter of the Foundation for Infantile Paralysis, suggested that they use the Lake Hickory Health Camp to create a hospital for polio victims. With the help of Dr. H.C. Whims, a dual county health officer, Crabtree and Hahn bypassed weeks of formalities and immediately set to work in transforming the Lake Hickory Health Camp into the Hickory Emergency Infantile Paralysis Hospital. This effort required the cohesive will of Crabtree, Hahn, and Whims, as the camp had to be renovated and expanded, supplies and equipment had to be found, and funding and staff had to be recruited. Within weeks, Whims, Hahn, and Crabtree had assembled a number of doctors, nurses, and therapists from across the United States who came from cites like Winston-Salem, Philadelphia, Chicago and medical schools like Harvard, Yale, and Johns Hopkins to fight the polio outbreak in Hickory, N.C.

However, this monumental feat can not only be attributed to the efforts of the three men who started the hospital. The town of Hickory, N.C. had to work together to allow this hospital to function. Dozens of student nurses, known as the "Angels of Mercy", were recruited from nursing schools and tasked with working nonstop. As a result, many local families were asked to house these nurses for free, police officers were asked to transport them to and from the hospital, and regular cab drivers were asked to work without pay. Lumber and other materials used for the building of the hospital were donated by Herman-Sipe, Hutton & Bourbonnais, and Cline Lumber Company. Carpenters, electricians, and plumbers were asked to work around the clock. Citizens from all professions, including lawyers, dentists, secretaries, and bankers, pitched in, helping to paint and clean. Even prisoners in the area pitched in, digging a three-mile water main conduit and staffing the kitchen and laundry. The radio station WHKY would broadcast a list of items the hospital needed, and these items would soon show up, along with a number of volunteers. Farmers delivered their own fresh fruits and vegetables and women delivered meals.

Within fifty-four hours of nonstop work after the architects completed their sketches for the hospital, the first patients were admitted. There were so many patients that private cars, ambulances, and even hearses had to be used to transport them to the hospital. Significantly, there was also no discrimination according to the races of the patients: white and Black patients were able to receive treatment. Iron lungs were procured to attempt to save victims with paralyzed breathing muscles.

Over a period of nine months, the staff of the Hickory Emergency Infantile Paralysis Hospital worked relentlessly to fight the polio outbreak. Although 12 children died and some were permanently paralyzed because of the disease, 454 children were successfully treated. At the time, this death rate was remarkably low. The National Foundation for Infantile Paralysis, also known as the March of Dimes, used Hickory's response as an example of the effectiveness a community effort can have against polio, calling Hickory's rapidly built hospital the "Miracle of Hickory" in a pamphlet published later in 1944. The hospital in Hickory operated for nine months.

Through the effort of brave and timely decisions, determination, and sheer force of will, the people of Hickory, N.C. were able to treat hundreds of children who would otherwise likely have not had access to treatment, and thus halt the outbreak. Today, a historical marker commemorating the feat that took place in Hickory in 1944 stands in Hickory, N.C. at the intersection of U.S. 321 and Old Lenoir Road.