In one of America's most bustling cities, a monument of Christopher Columbus has become a source of tension between the city's Italian American community and groups of anti-Columbus protesters due to the numerous roles that the explorer embodies as the man who "discovered" the New World. The Christopher Columbus Monument was dedicated to the city of New York nearly 130 years ago on behalf of the immigrated working-class Italian American community. It has served as a source of identity and inspiration, as well as a source of ethnic pride for many Italian Americans for nearly 130 years. However, in recent years, many have criticized the monument of symbolizing an inherent ethnic hate of Native Americans. Many Americans are opposed to recognizing Columbus as an inspirational figure due to his history of oppression and genocide of the Native Peoples. In December, 2017, the tension regarding this monument ultimately came to a head when the monument was commissioned for a review regarding "symbols of hate" in NYC. Those opposed to the recognition of Columbus called for the removal of the monument, while many Italian Americans demanded that it stay.

View of Columbus atop his 70-foot granite pedestal 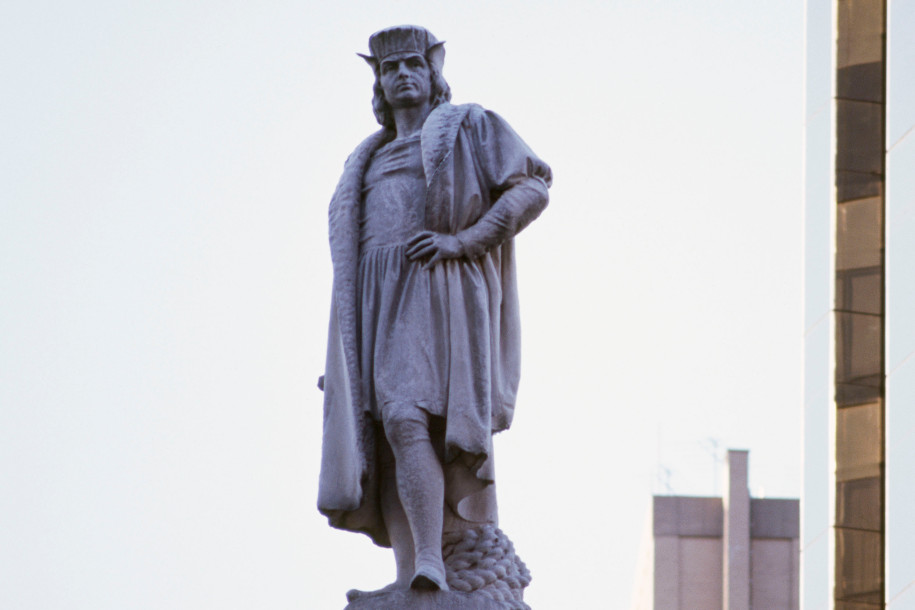 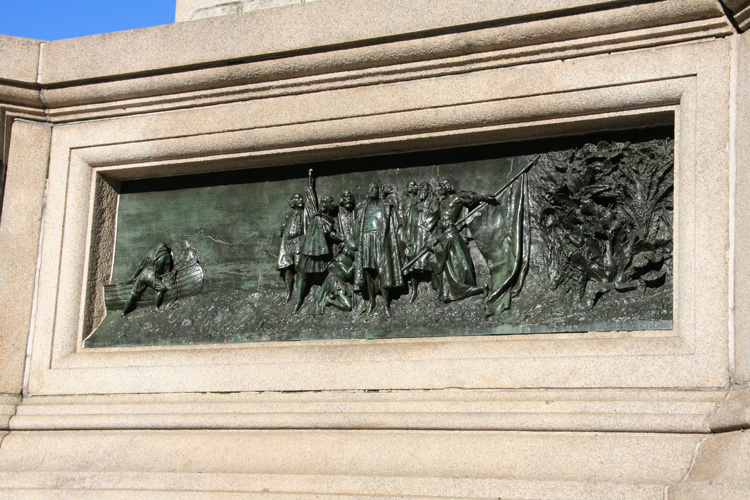 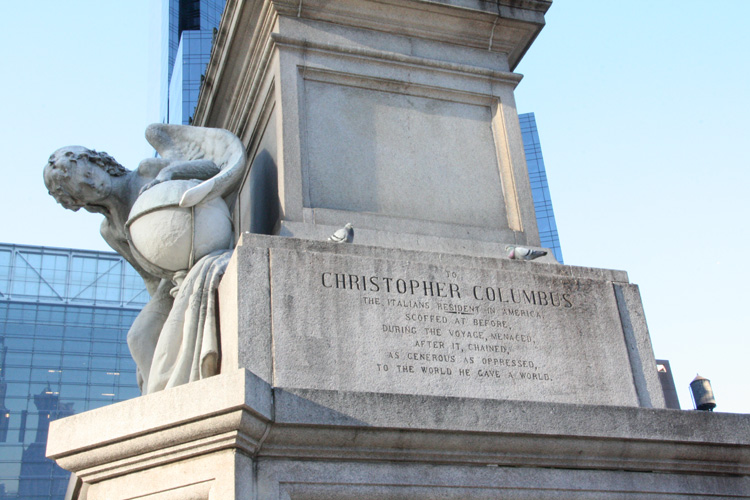 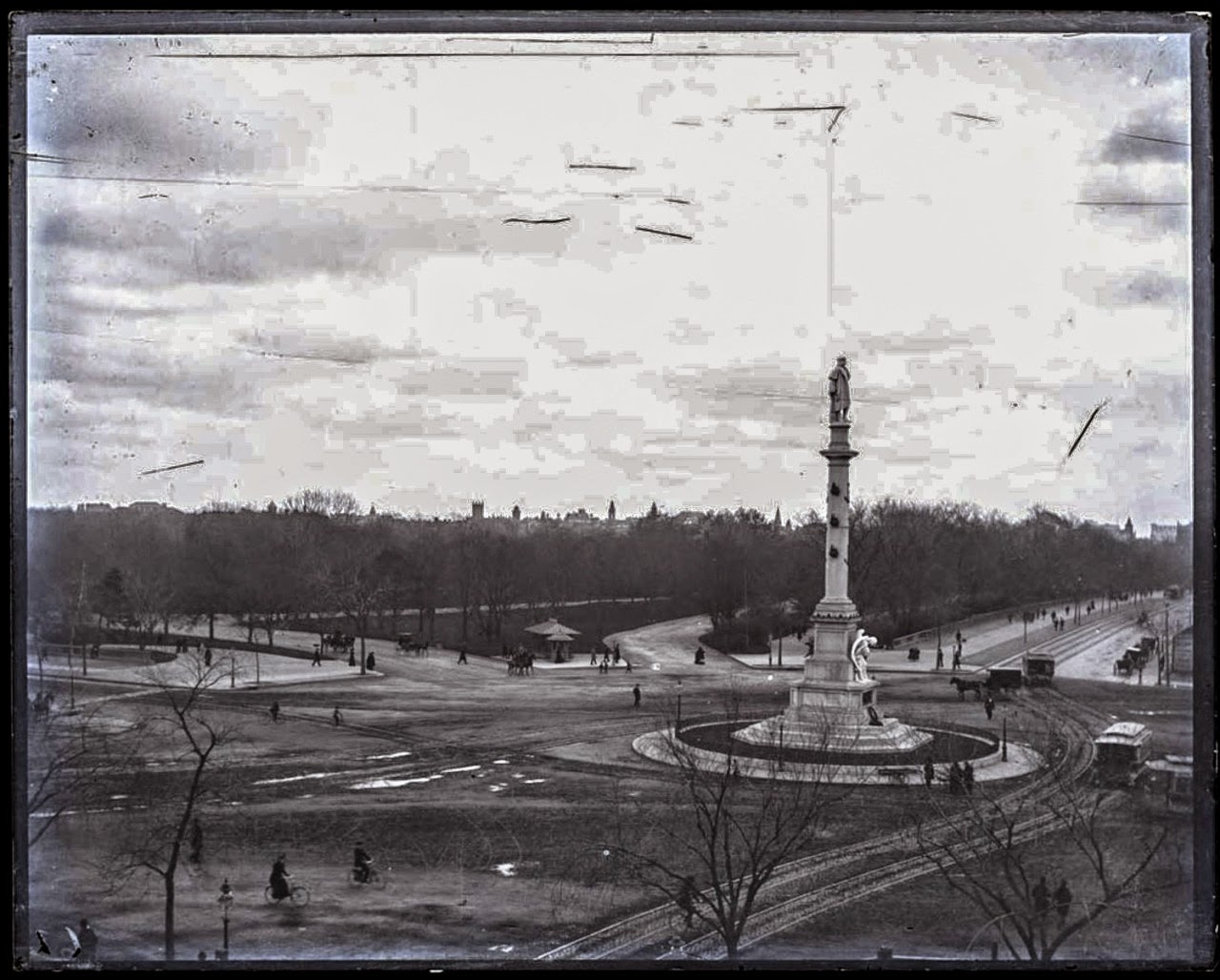 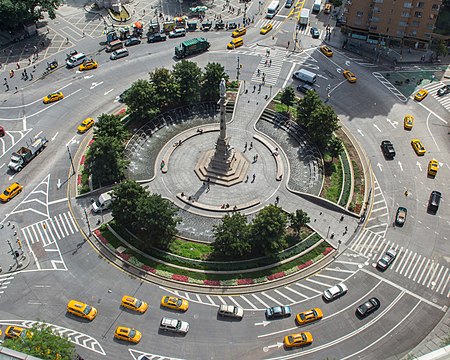 Columbus Monument at the center of subway construction, 1901 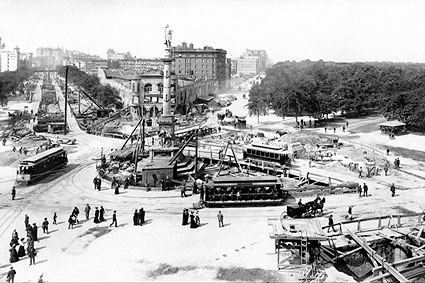 Protesters at the Columbus Day Parade in NYC, 2017 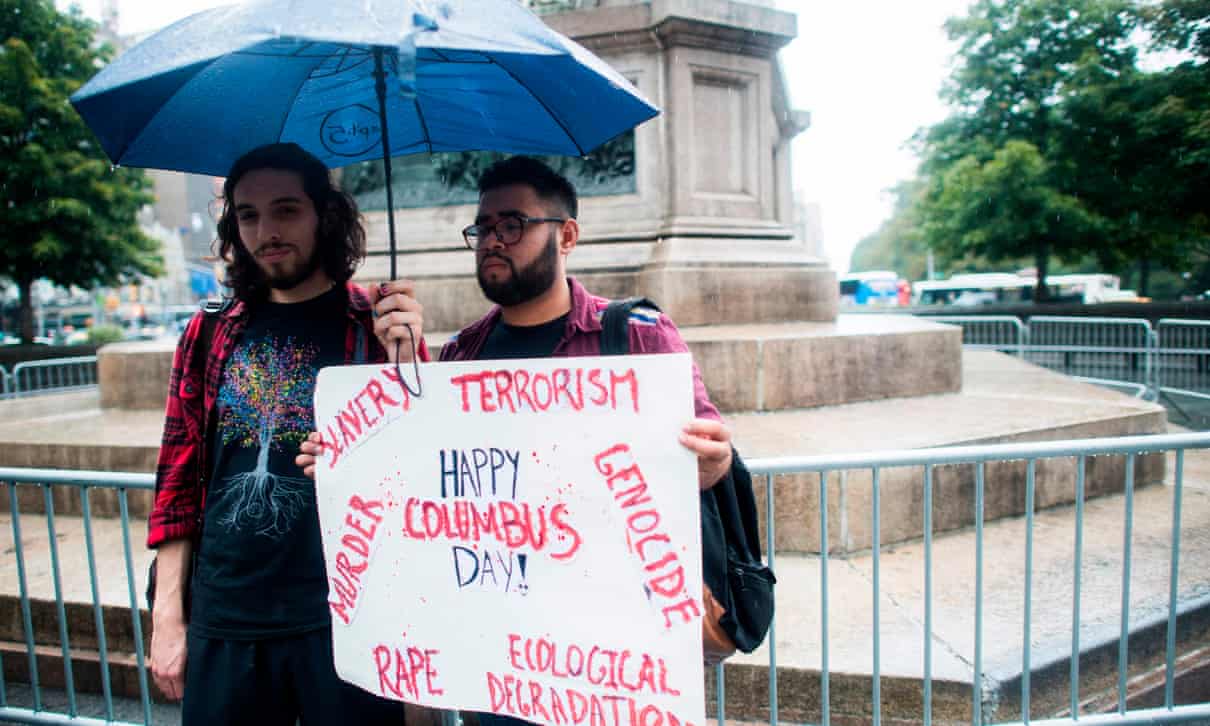 The Columbus monument, located in the center of Columbus Circle, was dedicated to the city of New York by working class Italian immigrants in the year 1892, 400 years after Christopher Columbus’ famous voyage to the New World.[1] The monument stands over 70 feet tall, surmounted by a statue of Columbus himself, looking over the city. The monument is adorned with three bronze-colored ships, two scenes of the voyage represented via bas relief, and a “winged figure,” not an angel but the Genius of Geography, who is curled over a globe. The monument was sculpted by Italian artist, Gaetano Russo.[2] Carlo Barsotti, founder of the first Italian-language newspaper in the United States, led the fundraising for the monument. [3]

This particular monument to Christopher Columbus was born out of an attempt for recently immigrated Italian Americans to be better accepted within American society. Many Italians were discriminated against due to their differing culture: their language, their food, and the color of their skin. The Italians in New York City chose to commemorate Columbus because “for a century, he had been adopted as a symbol of the United States, so, they thought that if Christopher Columbus- one of the most famous figures in Italian history- is so widely accepted by Americans, perhaps the working-class Italians can be as well." [1] To raise funds for the monument, Barsotti asked every Italian American business in New York to contribute up to $200, and eventually he was able to raise the $20,000 that was needed to sculpt the grand statue. The whole process, from raising the funds to finally erecting the statue, was completely Italian; the monument was made in Italy, of Italian marble, by Italian sculptor Gaetano Russo, and then was shipped to the United States on an Italian ship that was manned by an Italian crew. When it arrived in America, it was erected and prepared by Italian laborers. Finally, on October 12, 1892, over 10,000 spectators attended the installation ceremony.[1]

Since the erection of the Columbus monument, it has served as an important symbol of identity within the Italian American community in New York. For many Italian Americans, Christopher Columbus symbolizes the journey and the hardships that they have overcome as immigrants, and therefore he serves as a source of inspiration. For many years, many Italian Americans have viewed this particular monument of Columbus as a source of pride regarding their history and ethnicity. In recent years, however, some have suggested that Columbus is less a symbol of American acceptance and more a symbol of American hate.

Those of the opinion that Christopher Columbus represents everything that is deplorable about the United States caused the city of New York to take action regarding this monument. At the 2017 Columbus Day parade, as thousands of Italian Americans gathered to celebrate Columbus and their Italian heritage, a small group of protesters, who labeled Columbus as a “murderer and a rapist” gathered at the Columbus Circle monument. This group of protesters gained the attention of political figures, including state assemblyman Charles Barron. To quote Barron, “the land we are occupying now once belonged to indigenous people. Columbus was a murderer, a rapist, and a colonizer and he enslaved African people. We should not have a holiday named for an enslaver or glorifying a murderer.”[4] These protests led city officials and advocates for indigenous and colonized people to demand that the statue be removed from its prominent location.[5] Barron also called on Italian Americans to rename the Columbus Day parade as the Italian American day parade.[4] All of this surrounding tension eventually came to a head. In December 2017, the Columbus memorial was involved in a commission ordered by the mayor of New York City, Bill de Blasio, which had the purpose of reviewing “symbols of hate” in New York City.[6]

The monument’s involvement in the commission caused an uproar among many members of the Italian American community. In response to the escalating situation, the governor of New York, Andrew Cuomo, decided to nominate the statue to the National Register of Historic Places. By doing so, the monument would be protected from any future threats of removal or relocation, therefore remaining a permanent symbol of ethnic pride for the Italian American community.[7] The monument was nominated to the Register on September 20, 2018, and after a unanimous vote was officially listed to the Register a couple of months later on November 20. This action was unpublicized due to the monument’s surrounding controversy.[8] In less than a year, the Columbus Circle statue was called into question, considered for removal, then named and permanently protected as a federal monument.

Though the state of New York chose to preserve the Columbus monument, Jennifer Betsworth, the woman who presented the monument’s proposal to the National Register of Historic Places, acknowledged that Christopher Columbus “remains a controversial figure,” therefore attempting to address the concerns of the protesters who called for the removal of the statue.[8] For the opposing side of the argument, Angelo Vivolo, president of the Columbus Citizens Foundation, spoke up about the monument’s review on behalf of the Italian American community who supported keeping the monument:

“Columbus Day and the Columbus monument have played a vital role in Italian American acceptance and the celebration of Italian culture. As all nations do, we must continue to re-evaluate our history as Americans, and whom we choose to honor. That being said, we will not allow that reflection to come at the expense of a monument that has come to represent the many achievements that Italian Americans have accomplished.”[4]

This quote perfectly highlights the two sides of the tension regarding the Columbus monument; for many Italian Americans, removal of the statue would present as a removal of their history, of their ethnic pride, and of their successes in this country. For those opposed to Columbus and everything that he represents as an oppressor and a murderer, to keep the monument would be to honor such deplorable behavior without acknowledging the truth behind the past.

To address the controversy, many have suggested solutions to help better understanding of Columbus, as well as to add more historical accuracy to his monument. Mayor de Blasio suggested that “historical texts be added to address Columbus’ faults as well as his successes.” [8] The city of New York is also working to erect an Indigenous Peoples monument as a form of counter-commemoration against the Columbus monument.[7] Though the Indigenous Peoples monument has officially been commissioned, as of 2018 the city had yet to determine an exact location for the new statue.[9] As of 2020, there has been no news regarding the erection of the monument. Moreover, others think that another statue that honors Italian laborers should be built nearby, as a true representation of hard-working Italian Americans, rather than the tarnished representation embodied by Christopher Columbus.[1]

2Dossena, Tiziano Thomas. “‘But for Columbus There Would Be No America’ - Italian Monuments in New York.” Usa, February 2018. http://www.bridgepugliausa.it/articolo.asp?id_sez=2&id_cat=66&id_art=3554&lingua=en.

4Helmore, Edward. Columbus Day parade reopens statue debate: 'We should not be glorifying a murderer', The Guardian. October 9th 2017. Accessed May 11th 2020. https://www.theguardian.com/us-news/2017/oct/09/columbus-day-parade-new-york-protesters.