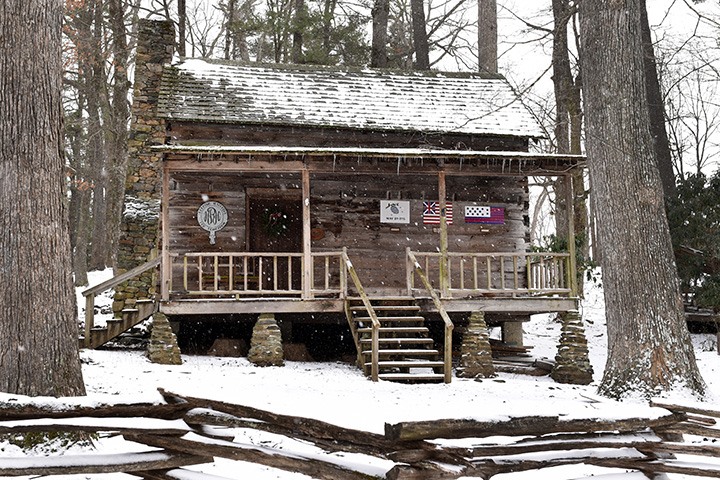 The Coffey Cabin was built as a wedding gift from Thomas Coffey to his new wife Ellen Cook Coffey in 1875. Tom had it constructed by housewright Jules Triplett in a different location so that he could perfect the cabin before setting it up permanently in Aho North Carolina. In each log there are roman numerals carved to show how the cabin was assembled and moved. Tom and Ellen would have thirteen children two of which unfortunately died as infants. The cabin was donated to SAHA in the early 1960s. It originally was located on the far end of the parking lot where part of the Watauga Farmers Market sits today. While there it served as the Horn in the West gift shop and also eventually served as a Boy Scouts of America museum and meeting place. In 1987 it was moved to its current location on Hickory Ridge and lights and electricity were installed. Today the cabin is used to portray what types of crafts were done during the 18th Century in the North Carolina Backcountry. Inside there are three spinning wheels that are used to demonstrate spinning fibers. The main artifact in the cabin is a larger Barn Loom. The loom belonged to the Tatum family and id believed to date to the late 1700s. It is still fully functional and is used to demonstrate weaving.

Wendy Fletcher , “Coffey in the Snow ,” The History of Horn in the West and Hickory Ridge Living History Museum, https://sahahistory.omeka.net/items/show/50.