Built in 1914, the Roanoke Inn boasts a long history of drinking, eating, and the occasional scandal. With entertaining stories involving a reputed brothel, Prohibition alcohol serving, and a gunslinging second husband (really), the Inn is simultaneously a cozy place with a very exciting history. Enter inside to see a 1940s style diner/bar full of historical callbacks and a mixture of local regulars and craft beer seekers. Though its clientele may not have changed much throughout its long history, the Roanoke’s purpose has: originally built as a sort of B&B for travelers coming from the Seattle ferry, then as a place to secret alcohol during the 20s, it finally morphed into the familiar Inn we know today.

A snapshot of an 1890 map of Seattle by W. H. Whitney. Three ferry lines were connected to Mercer Island at the time, with the two northern ones landing at the Pier next to the Roanoke Inn.

Part of the current exterior of the Roanoke. Photo by Chason Gordon. 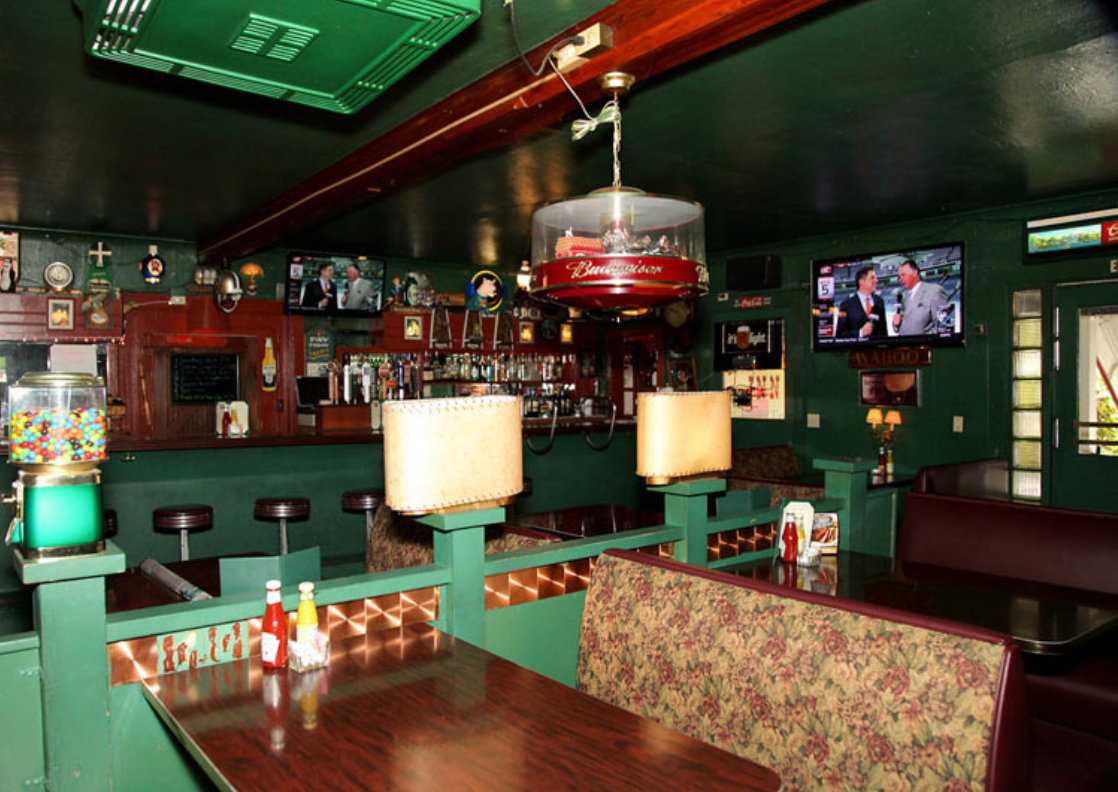 The current exterior of the Roanoke. Outside and back seating not shown. Photo by Chason Gordon. 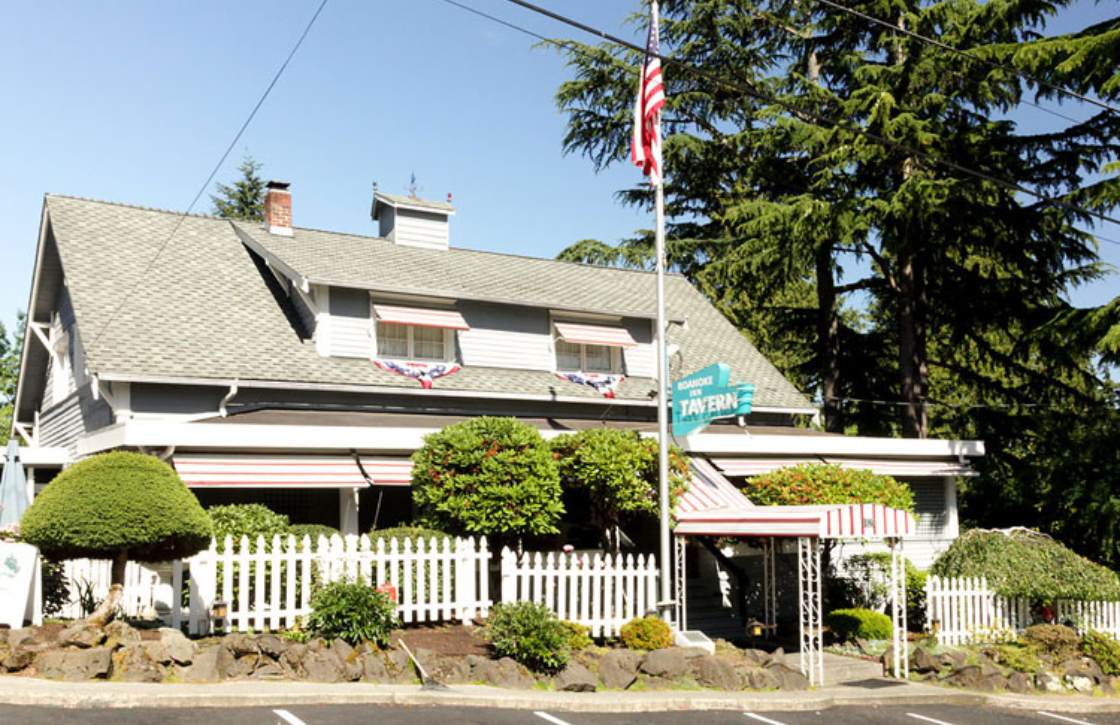 Photo of East Channel Bridge in 1938 by Charles Laidlaw, courtesy of MOHAI. This was the first bridge to connect the Seattle area to Mercer Island.

Dedication of the Lake Washington Floating Bridge, later Lacey V. Murrow Memorial Bridge, in 1940. This caused the immediate shutdown of the ferry system. 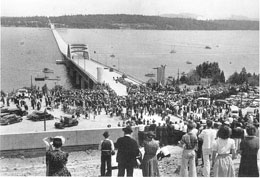 Drivers going down 72nd Ave, one of Mercer Island’s historic roads, are likely to notice a small establishment called the Roanoke Inn along the side of the road. On the outside, it appears to be a neat, if ordinary, white house, giving no hint of how long it has stood. If they were to park and enter, however, they’d find a 1940s style tavern, full of bustling clientele in the evenings. Even so, most patrons are unaware of the Inn’s long history; in fact, 2020 marks the 106th year of her opening.

When the Roanoke was originally opened by George McGuire in 1914, it was as a place for passengers to spend the night after disembarking from the long-discontinued ferry from Seattle to Mercer Island. At that point, roads fit for driving hadn’t been put in yet; there was little else for travelers to do as they arrived on the island but have a few beers, rent a room, and enjoy the signature chicken dinner.

At the time, ferries were the only way to access Mercer Island. The last boat to do so was a large steamer fittingly called Mercer, which was removed in 1940 along with the ferry dock that the Roanoke was situated next to (back in those days, the Roanoke was actually a waterfront property, designed for easy access from the Lake).

By the time that car-worthy roads were put down, the Prohibition had started. While we cannot verify this (the owner would’ve been eager to keep it off the books), local legend says that the Roanoke made their mark in the 1920s by serving alcohol to customers in coffee mugs as they gambled. By this time, Mr. McGuire had lost the Roanoke due to debt to Mr. Green, who took over the inn’s operation. Another popular rumor of the time was that the Inn had a double function as a brothel- another story that, true or not, Mr. Green would have wanted to keep quiet.

Once Prohibition ended, the tavern expanded their business to sell groceries, ice cream, and pop. However, since children were now not allowed inside (as, of course, they continued to sell alcohol), there was a window by the door where they could purchase snacks as they played outside (much to the disappointment of the neighborhood, ice cream is no longer available for purchase from the window).

In 1942 or 1943, Edwin and Laura Reeck purchased the Inn. The details of ownership from Mr. Green to the Reecks have been lost to history, but we know that it changed hands several times before that point. It was under the Reecks that the Inn once more became a proud local establishment, serving beers, wine, and various foods to patrons- a precursor to the craft beers they’re famous for selling today. With the addition of the Lacey V. Murrow Memorial Bridge (i.e. the bridge from Seattle to Mercer Island) in 1940, along with the new replacement of the East Channel Bridge (Bellevue to Mercer Island), both Islanders and off-Islanders began to enjoy the Inn as they sat beside the new fireplace. That same year was the year the Seattle-Mercer Island ferry closed, officially putting an end to the Inn’s original function of hosting weary ferry travelers.

After Edwin’s passing, Laura remarried to Bill Bice, who was known as a North Dakota cowboy; while showing off one day, he shot a hole into one of the walls, and was promptly told off by his wife. The hole can still be seen behind the cooler today.

Edwin and Laura’s only son Hal eventually took over the Roanoke, running it much the same as his parents did. When he passed in 1993, his wife Dorothy continued the operation of the Inn, and still retains the Inn today. The interior now looks virtually identical to when the Reecks first bought the Inn almost eighty years ago, with a gumball machine, darts, the old fireplace, and even an ad for Safeco Field’s inaugural game hanging on the wall.

While nowadays the Inn no longer hosts overnight stays, it is still very much a local favorite, and it has long been a tradition for Islanders to take their kids to the Inn on their 21st birthdays to share a drink. As mentioned above, the Inn serves craft beers, including Pliny the Younger, one of only 20 bars in the state to do so, making it a destination spot for people all around the Seattle area.