Midland Square Veterans Memorial is located in downtown Tremonton. Locals residents refer to the memorial as Midland Square. It got the name from an old hotel that stood there. The Midland hotel burned down in 1995. A local hero by the name of Allen C. Christensen, or AC, was the mastermind behind this memorial. Midland Square consists mainly of a rectangular monument which has the pictures of the Borgstrom brothers. Four out of the five Borgstrom brothers died within six months of each other while serving during WWII. There are several plaques surrounding the main monument. On those plaques are the names of 3,000 local veterans sorted according to whichever war they served. There also stands a “larger than life” statue of a soldier. That statue stands at 7 ft. 7 in. tall and was sculpted by Val Lewis. Midland Square was dedicated on August 18, 2001. Tremonton residents were the ones behind all the funding 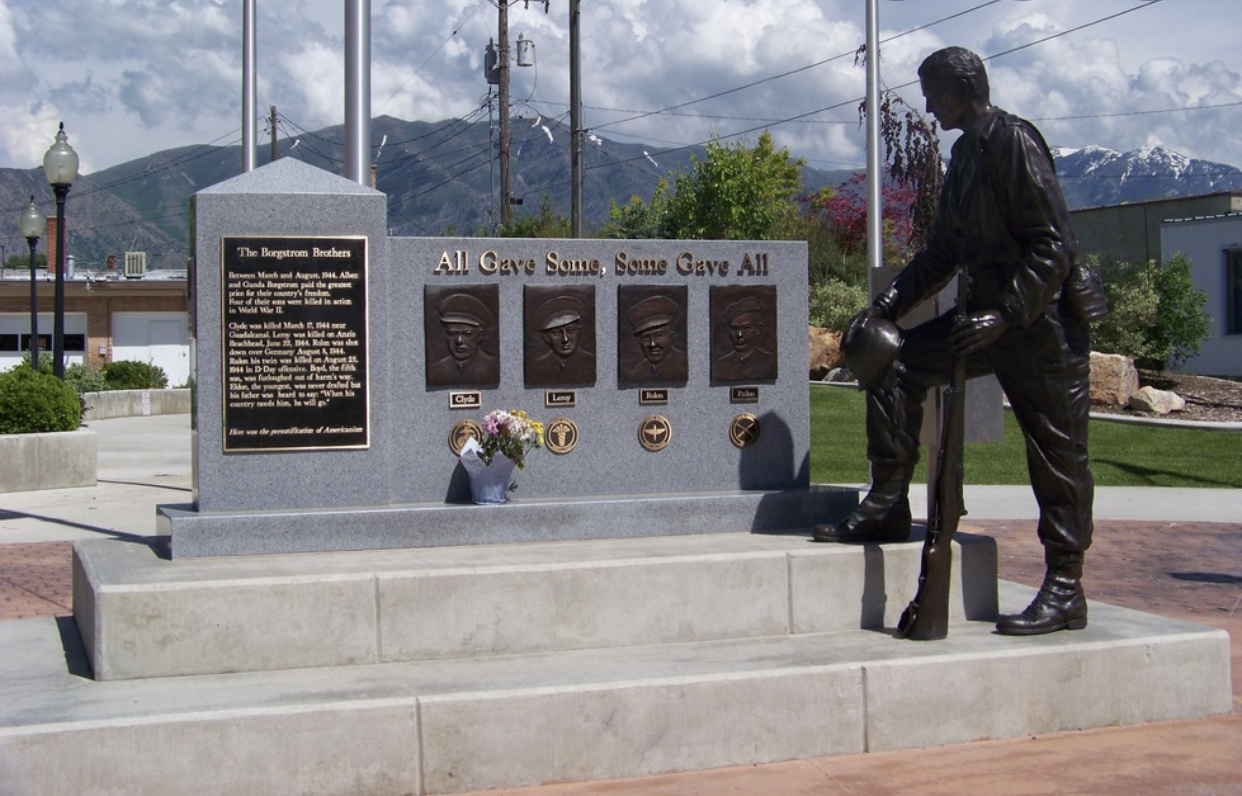 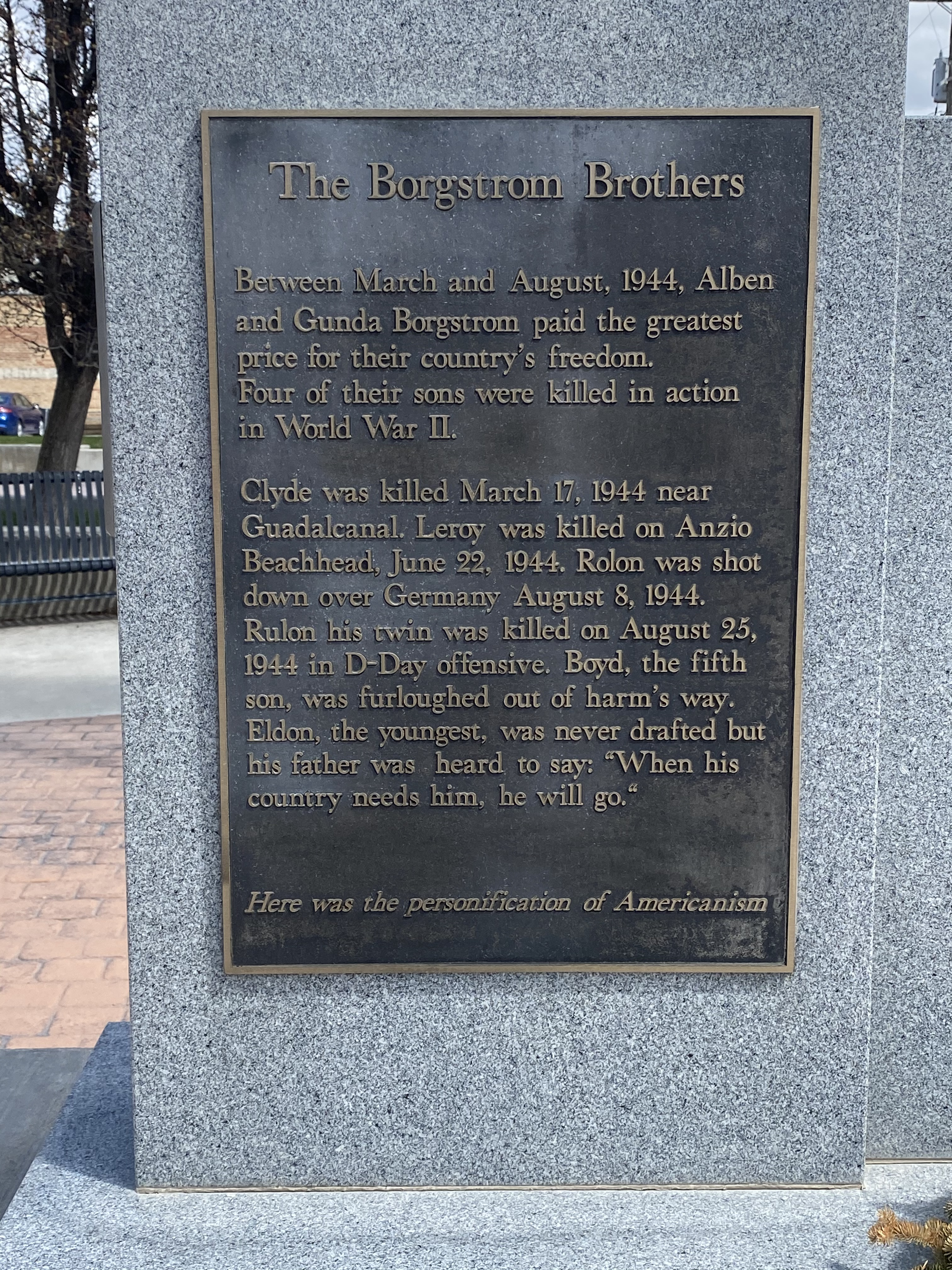 A man by the name of Allen C. Christensen, or Ace as the locals call him, created this memorial. Ace was a true hero. He served in the Air Force during WWII where he endured some of the most trying and hardest moments of his young life. Ace was a POW of WWII in Japan for 3 ½ years. Fighting in war and having to leave your family is hard. Being a survivor is sure something to be proud of. Ace was a very selfless man and would give the shirt off of his back for anyone. Not much younger than the Borgstrom brothers, Ace wanted a way to honor them. That is when he came up with the Midland Square Veterans Memorial. He was then able to make it about all of the local hero’s located in small town Tremonton, Utah. One of Ace’s favorite quotes is located on the top. “All gave some and some gave all”. Unfortunately for these four brothers they laid down the ultimate sacrifice, their lives.

Now, you may be asking who exactly were the Borgstrom brothers? Well before we get into their war story, lets get a little background information on their families. Alben and Gunda Borgstrom owned a small farm in Thatcher, Utah where they not only raised their family, but also sugar beets, alfalfa, grain and cattle. Alben and Gunda had eight beautiful children, five boys and three girls. The four men that died were named Leroy, Clyde, and twin brothers Rulon and Rolon. “Many families across the nation sent sons off to WWII, but none of them had the same ending consequence”.(Bagley, Pat)

LeRoy Elmer Borgstrom, 28, was the eldest. In November of 1942, LeRoy was drafted into the United States Army. In October of 1940, more than a year before the attack on Pear Harbor, Clyde Eugene Borgstrom, 26, enlisted into the United States Marine Corp. Last, but not least were twin brothers Rolon Jay and Rulon Day, 18. They were drafted in July of 1943 only months after turning 18. They were separated during their training, but later reunited as gunners on heavy bombers. Aside from their younger brother who wasn’t old enough to go to war they had one more brother. Boyd Borgstrom, 19, enlisted into the marines with his brother Clyde.

March of 1944 was a day for the Alben and Gunda to remember. They received a Telegram from the War Department informing them that their son Clyde had died. Clyde was sent overseas after his training in San Diego with an aviation engineering unit. He was a Veteran of many Pacific island battles. He was killed in action on March 17 at Guadalcanal, Solomon Islands. A few short months later in June came more bad news. Leroy, whom was with a medical unit, was killed in action somewhere in Italy on the 22nd of June. The twins were part of a bombing campaign in Europe. The losses associated wage those flying B-17 and B-24 bombers were terrible. A tour of duty was 25 missions. Many crewman only had a 1 in 4 change of completing a full tour. Rolon died Aug. 8. Rulon died August 22nd, however, his death wasn’t confirmed for two months.

After losing four our of five sons fighting, the Borgstroms couldn’t handle loosing another. They fought long and hard with the Marine Corp to send their son Boyd home, but the Marine Corp refused. He had already used up all his furlough. There was nothing else he could do. After months of trying and word getting out to the community of this tragedy, neighbors began to get involved. One of their friends got Utah’s Congressional Delegation involved. The next day Marine commander Lt. Gen. A Vandergrift ordered a honorable discharge for Boyd.

The Army and Navy adopted a policy, “ The sole surviving son of any family which has lost two or more sons in action will be exempt from combat duty.” Thanks to the sacrifice the Borgstorms and others, no family will have to endure this kind of tragedy again.