Our trail starts at a little-known but important place of French history in the state. One of the first paths through what is now Indiana, the portage was where initial explorers crossed into "Illinois Country" from Michigan to find trade partners and fertile hunting grounds. The St. Joseph-Kankakee Portage was an expanse of around four to five miles where boats and supplies were carried in between navigation on the St. Joseph and Kankakee Rivers. As early as the late 17th century French explorers and travelers looking to make it to the Illinois country would use this path to bridge the gap between the rivers. 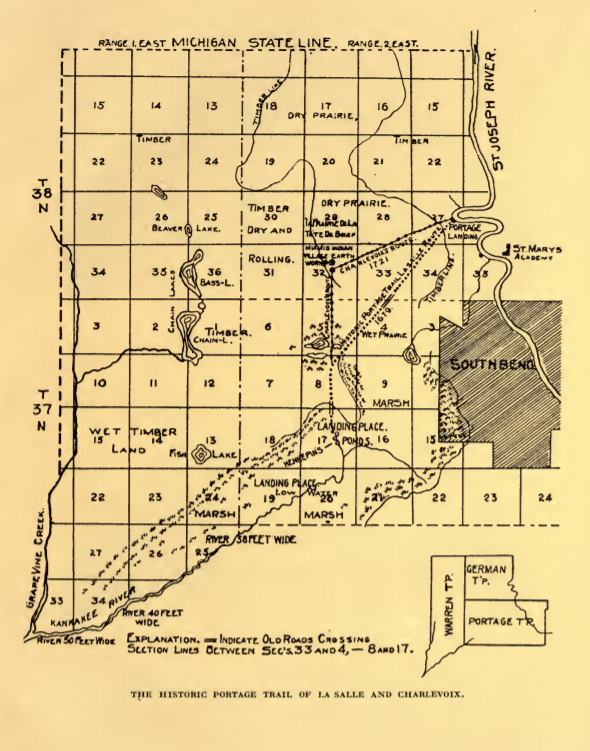 Though French explorers traversing the area now on the outskirts of South Bend kept few records of their travels through the Midwest, what they did make note of about the portage was the abundance of wild animals such as bears, bison, minks, muskrats, wolf, foxes, and wild-cats.This land surrounding the portage would eventually be called by an early American writer "the garden of America", due to its plentiful game and flora.The path was where canoes used to travel down the the main trade routes of Indiana, its rivers, could not be used had to be carried across miles of wooded area and marshland to the next waterway. Carvings made on trees from French explorers like Rene-Robert Cavalier still were visible and able to be photographed in the late 1800s from where they marked their path. La Salle, one of the most influential French explorers of the time, would use Indiana and the portage as an essential route to expand French influence and make peace with tribes in the area.

Last updated by Luke Dearinger (Instructed by eric sandweiss, Indiana University--Bloomington) on May 4th 2020, 3:48:43 am.