During World War I, American University was the site of a chemical weapons experimentation station. The university's board of trustees agreed to support the war effort and jointly operated a research station with the War Department at this location. At its peak, one thousand chemists working with the Army Corps of Engineers worked here to develop mustard gas and other weapons. The Army demobilized the site after the war and buried some of the chemical weapons and ordnance waste. The locations of these contaminated spots were forgotten and the neighborhood occupied by the station developed into a residential area. Buried waste discovered in the 1990s and 2000s has required significant decontamination efforts continuing into the 2020s. 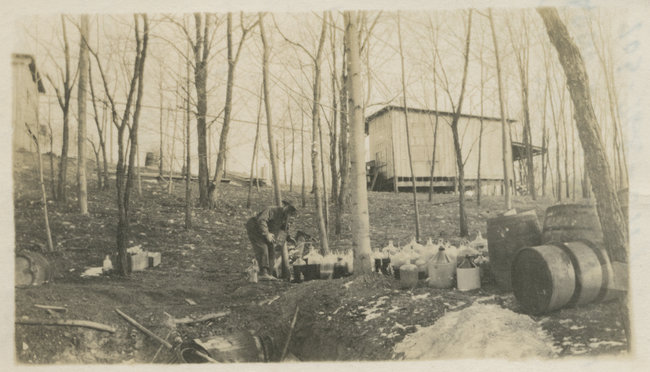 In 1917, American University's board of trustees offered the campus to the United States government in support of the war against Germany. American University was a small, isolated institution at the time, located in the semi-rural hills overlooking Washington, D.C. The Army Corps of Engineers took control over the campus and its buildings.

The U.S. Bureau of Mines had investigated military gas uses on its own initiative and under directives from the Army and Navy until June 25, 1918, when President Woodrow Wilson transferred the investigations to the Army's Office of Gas Service. The Army established Camp American University to train engineer officers, later renaming it Camp Leach. Additionally, the Army established the American University Experiment Station, where 1000 scientists tested mustard gas, ordnance, and other weapons in trenches and fields designed to mimic the Western Front. These activities would have been visible from the Spring Valley neighborhood of Washington and contaminated the area, though they did not impact property values. Former senator Nathan B. Scott and his family were gassed by an escaping cloud of mustard gas from the station in August 1918, and other residents of the area observed the effects of gas.

After the war, the Chemical Warfare Service continued to work at the station but was slowly demobilized, with the closing, salvage, and restoration operations continuing into 1921. After the closing of the station, the Washington fire department burned down 70 temporary buildings which were too contaminated for future use by students at the university. Shells, poisonous chemicals, and other weapons debris were buried at the southern end of campus. One of the holes, depicted in a contemporary photograph, was called "Hades."

A construction crew digging for a utilities project discovered the buried chemicals in 1993. The Army Corps of Engineers then spent the next year removing 200 shells. Additional caches of chemical weapons debris emerged in 2000 and 2007. Between 2000 and 2010, 500 munition items, 400 pounds of laboratory glassware and 100 tons of contaminated soil were removed from the former experimental station site. The "Hades" hole was discovered a few years later under a house at 4825 Glenbrook Road. The house was torn down and the property encased in an aluminum structure while hazardous materials specialists excavated the chemical weapons for destruction near the Dalecarlia Reservoir. Excavation and decontamination efforts have continued in 2020.