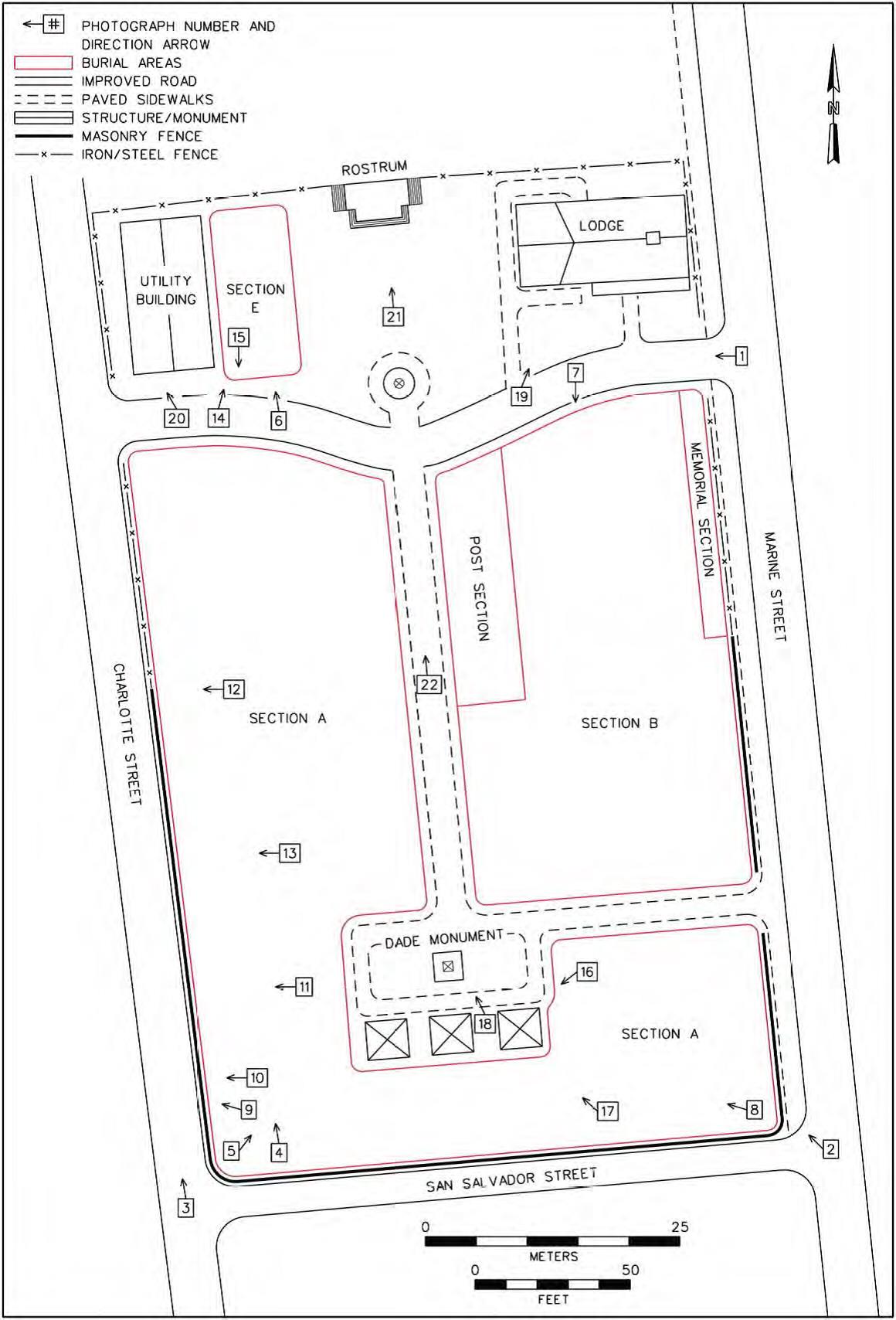 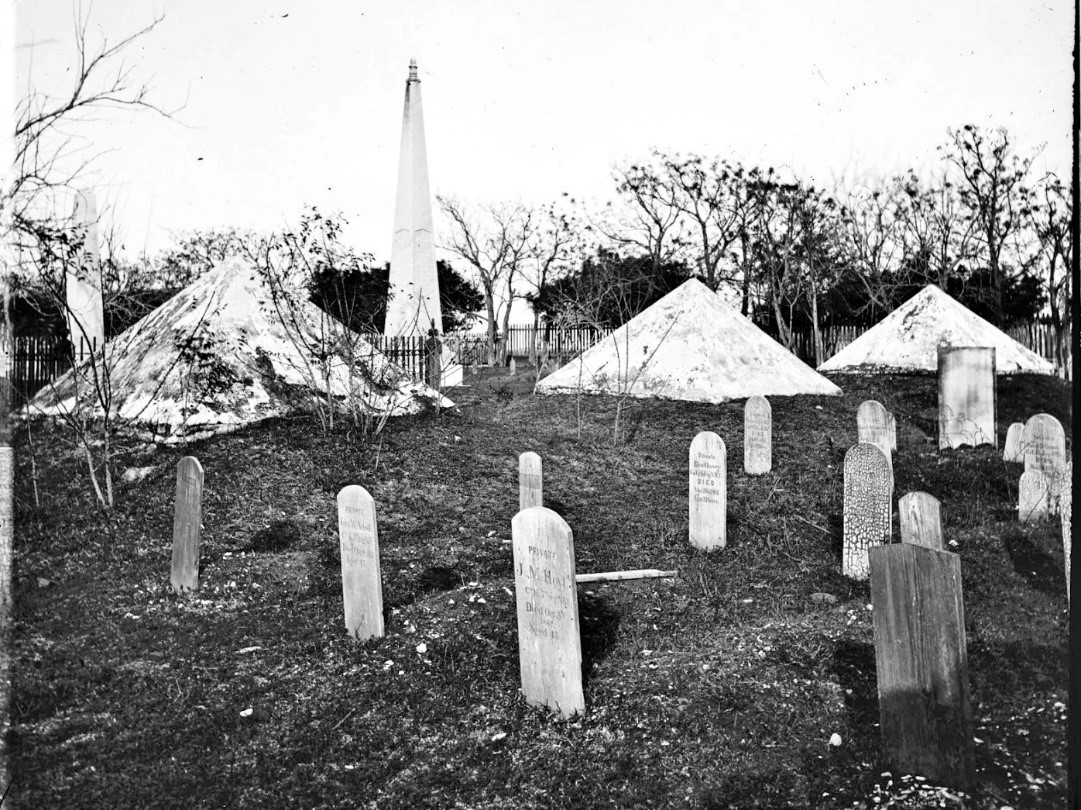 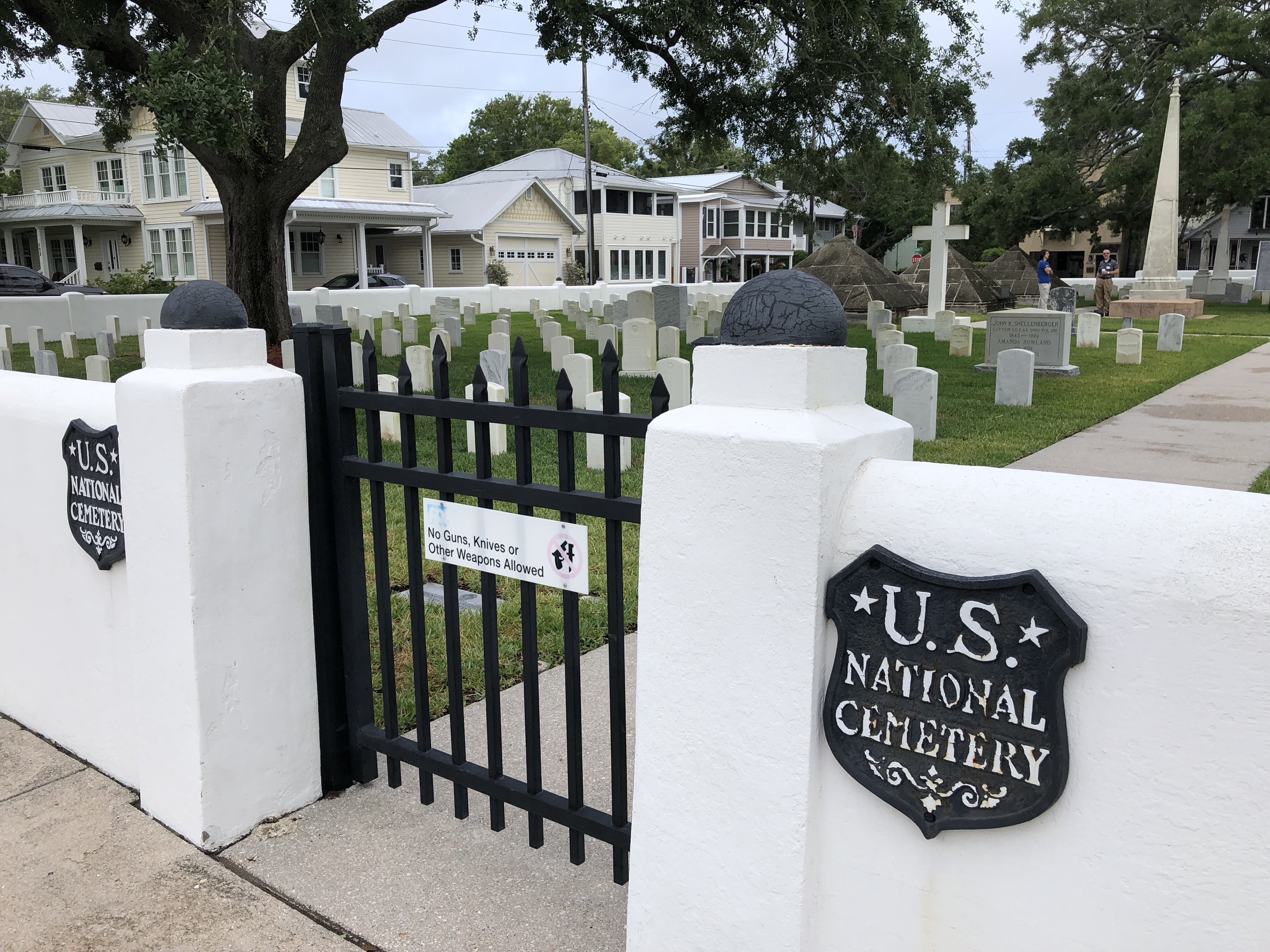 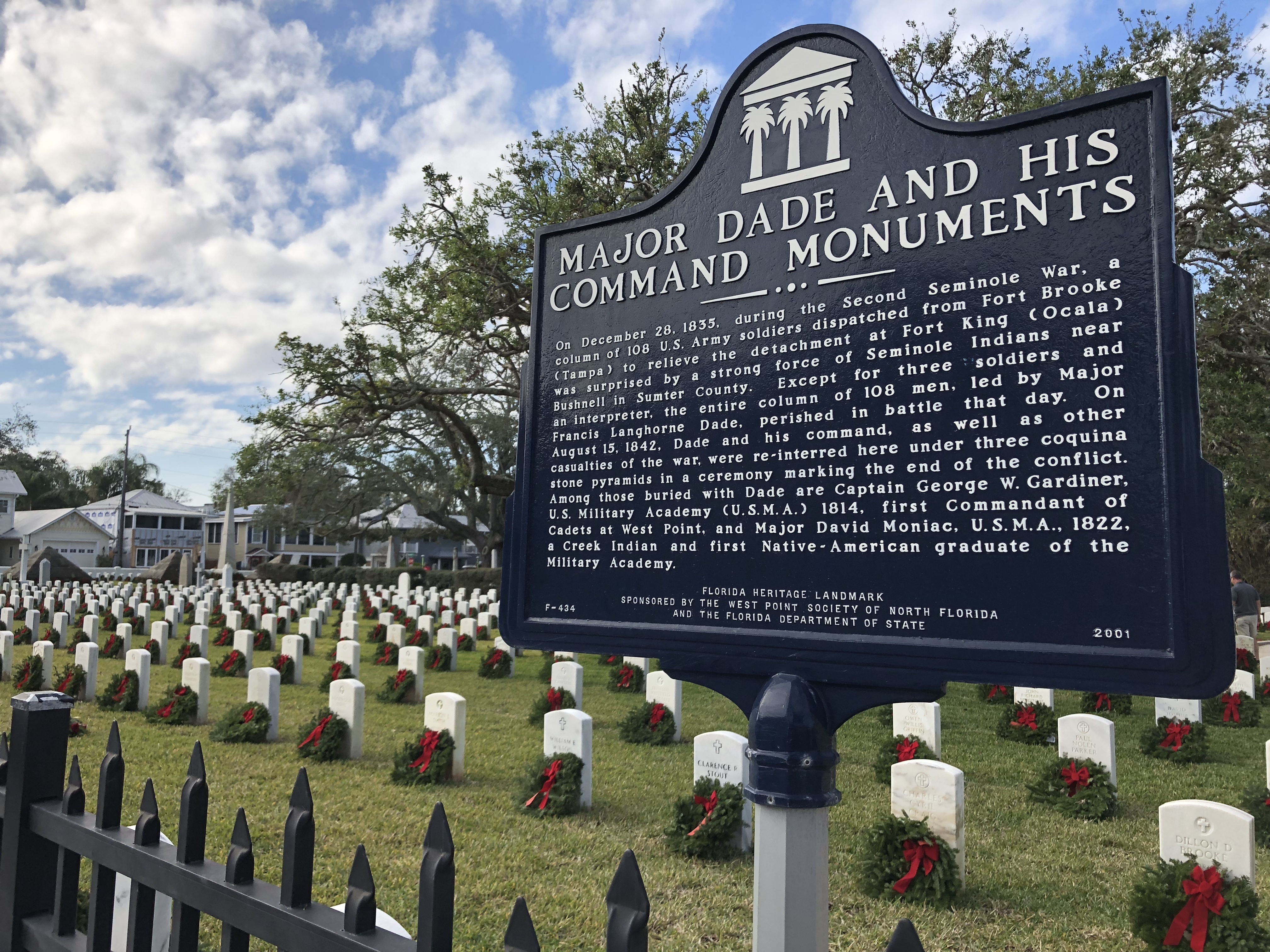 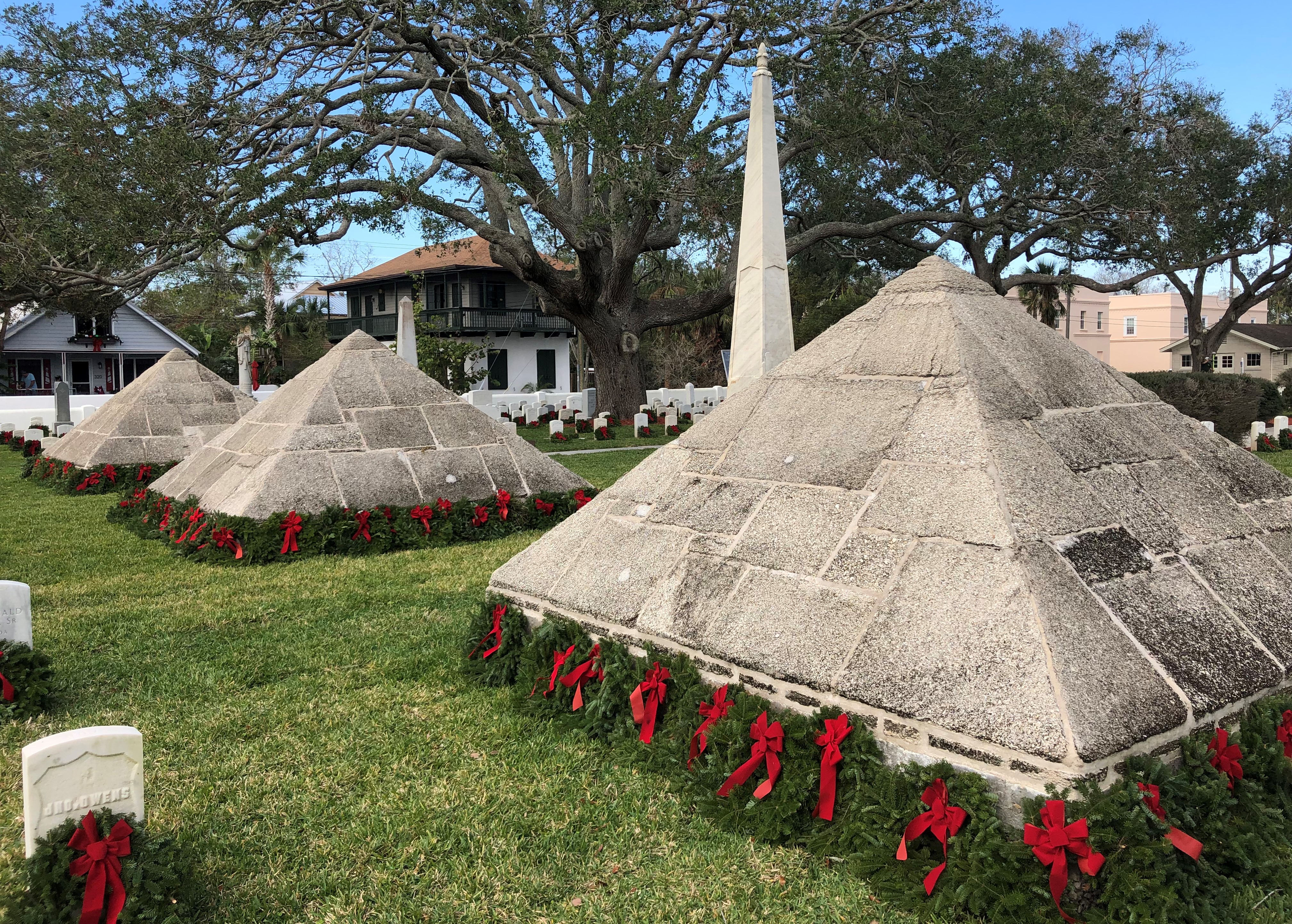 The first recorded burial occurred in 1828. Prior to its use as a cemetery, the site’s colonial history dates back to the 16th century when the Spanish Franciscan friars built a friary on the land. When the British took Florida, they converted the friary into officers’ quarters and barracks for troops. The later constructed St. Francis Barracks, which the Spanish burned when they repossessed the city in the late 1790s. Thirty years later, the U.S. Army took control of the city and established the Post of St. Augustine. Maps from this era indicate that the area immediately south of the barracks – where the cemetery currently sits – contained a garden and orchard.

Most of the early interments stemmed from deaths during the Second Seminole War, due to both disease and battle, though the cemetery does contain remains of soldiers who served during the Civil War. Then called the Post Cemetery, the site played an important role in the conclusion of the Second Seminole War. When Colonel William Jenkins Worth took command of the Army in 1841, the War Department voiced concerns with the costs of continued military actions and called for cutbacks. By 1842, Worth determined the remaining Seminole forces to be non-threatening, calling an end to the Second Seminole War on August 14, 1842. To symbolically mark the conclusion of the war, on August 15th the St. Augustine cemetery held a ceremony for the deceased soldiers with the dedication of the three pyramid monuments. The Army led a precession across the St. Sebastian River Causeway, through St. Augustine, and ended in the cemetery. The military parade consisted of eight wagons containing soldier’s remains, drawn by elegant mules, as well as an escort of four companies of soldiers.

Constructed with coquina stone, and originally covered with stucco, the pyramids stand among the oldest monuments in any U.S. National Cemetery. Records contend that the remains of 1,468 soldiers, many of whom died during the Second Seminole War, lay under the pyramids. These soldiers died in many locations around Florida, however an order charged a detachment of troops to disinter the bodies from proximate battlefields and fort gravesites in order to bury them with ceremony at the cemetery.

In order to supplement the pyramids with a more imposing monument, the men stationed at the barracks donated portions of their income for the construction of an obelisk. They collected the money by October 1843 and erected the memorial during the first week of January 1844. The erection of the monument, a twenty one foot tall obelisk made of coquina and marble, memorialized the fallen officers and soldiers of the Second Seminole War, including Major Francis Dade and his patrol of over 100 men killed during a Seminole attack on December 28, 1835.

In 1862, Abraham Lincoln signed legislation which eventually became grounds for the establishment of the National Cemetery System. The law stated that:

“the President of the United States shall have power, whenever in his opinion it shall be expedient, to purchase cemetery grounds, and cause them to be securely enclosed, to be used as a national cemetery for the soldiers who shall die in the service of the country.” 1

By 1881, the Post Cemetery had fallen into disrepair, and in 1881, under the recommendation of General Montgomery Meigs, the grounds became a National Cemetery.

In 1912 and 1913 the cemetery gained more land on its northern end and was enclosed with coquina walls, increasing in size to 1.36 acres. The same walls mark the perimeter today. The southern border of the cemetery follows the southern boundary of the old Spanish city wall. In the northern corner of the cemetery stands the Superintendent’s Lodge, built in 1938 in the Spanish architectural style in order to fit in with the aesthetic of the town. A rostrum, built in 1940 to serve as a stage for Memorial Day and other ceremonial observances, occupies the north side of the cemetery next to the Superintendent’s Lodge.

The U.S. Army Quartermaster’s Department maintained the site until 1973, when control shifted to the Veterans Administration (currently the Department of Veterans Affairs). The Cemetery is open to the public daily from 8:00 a.m. to 5:00 p.m. It is no longer open to new interments due to lack of space and only allows new burials in the case of a disinterment or canceled reservation.

"Monument to the Officers and Soldiers who Fell in the Florida War." The St. Augustine Herald January 9th 1844.