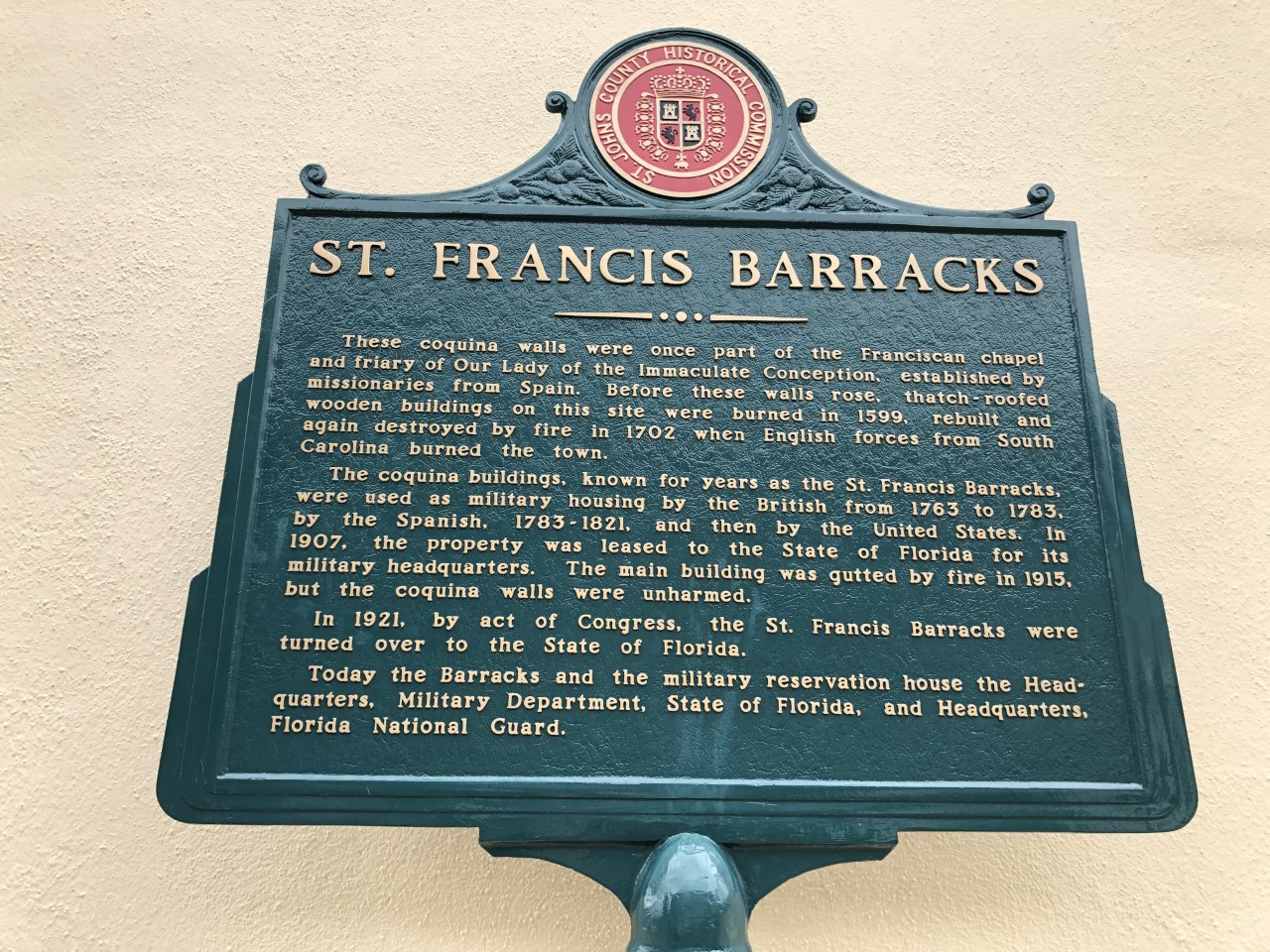 Structures of the St. Francis Barracks in different eras 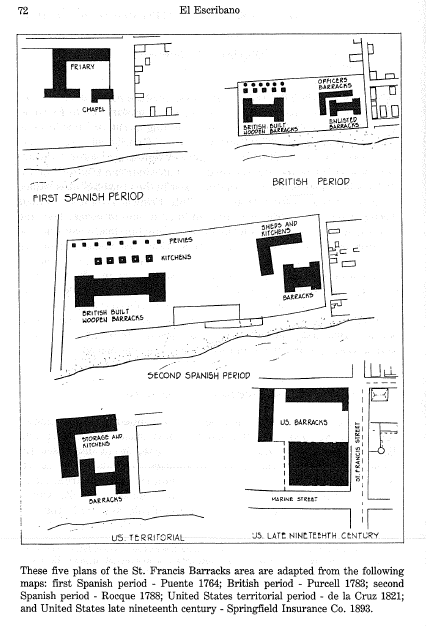 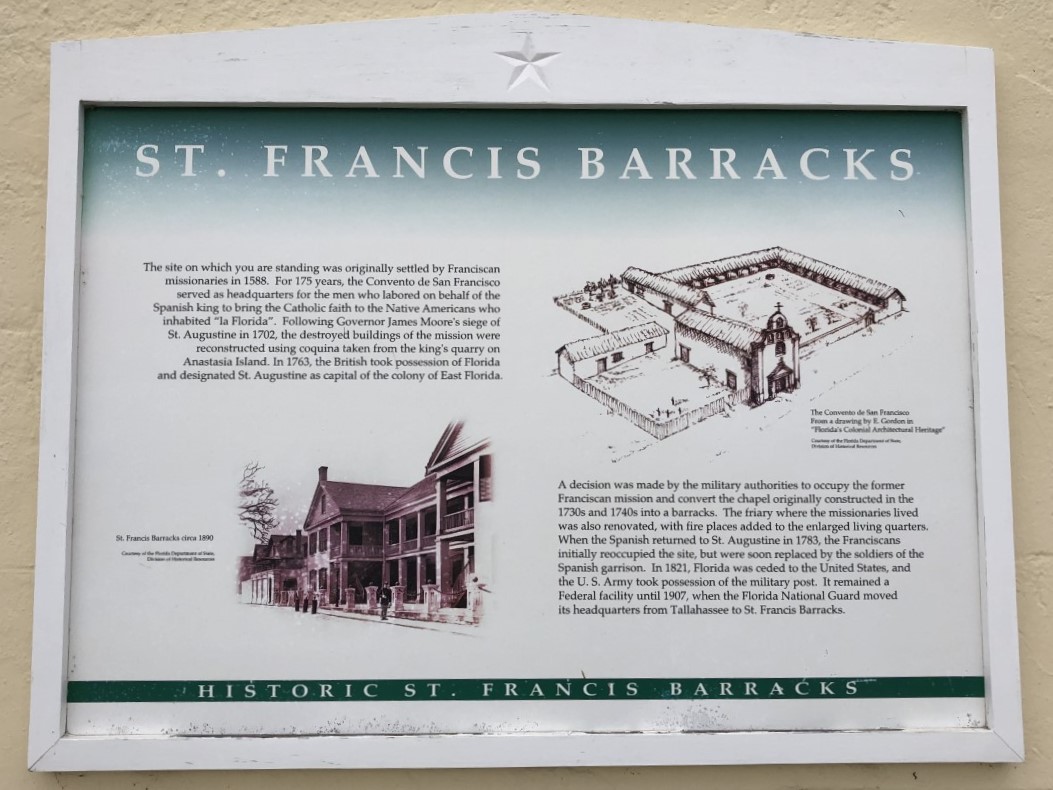 Drawing of the Saint Francis Barracks 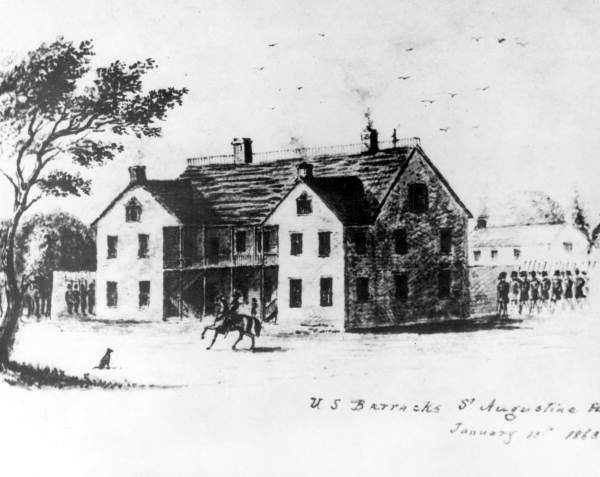 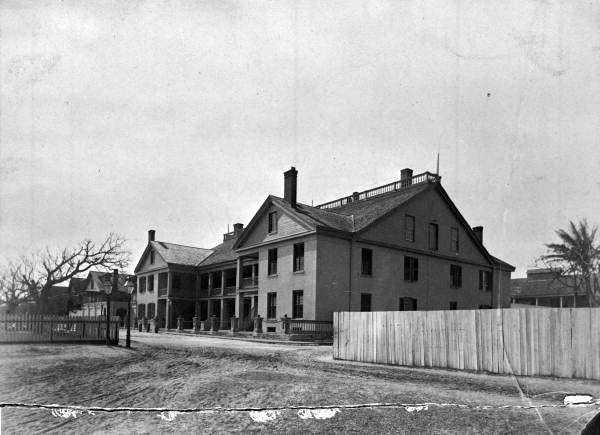 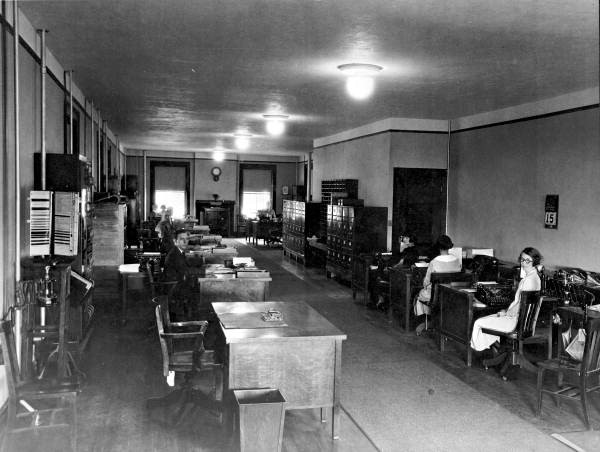 After the Spanish settled St. Augustine, the Jesuits first occupied the land of the current day St. Francis Barracks. The Franciscans replaced the Jesuits and, in 1588, built the first permanent structure out of logs and thatched palm. The monastery, named “Nuestra Senora de la Concepcion,” burned down on March 14, 1599, and was rebuilt by 1605.

In 1702, the English burned the monastery, along with most of St. Augustine, during James Moore’s siege of the Castillo de San Marcos. After destruction by the English, work on a new stone friary started in 1724. The king of Spain sent money for rebuilding, but misappropriations hindered the progress. The builders made the walls with coquina rock quarried from nearby Anastasia Island, and used Native American as well as convict Mexican labor to assist with construction. After a lengthy construction process spanning over three decades, the friary stood “168 feet long, 18 feet wide, and 18 feet high.”*1 The Spanish did not use the new building for long because following the Seven Years War, the Treaty of Paris (1763) gave Florida to England in exchange for Havana, ending the period of Spanish control.

When the English took control of Florida, the Franciscans tried to keep the friary in Catholic hands. However the British disagreed, converting the friary to barracks for quartering troops. In 1770 and 1771, the British constructed more barracks out of wood in order to house more soldiers. The new barracks stood three stories tall, “208 feet wide, with wings at each end” which “were 82 feet long and 38 feet wide.”*2 The station accommodated upwards of three regiments (approximately 600 men). After only a few years the inferior building materials, shipped from New York at a high price, began to fail due to the harsh Floridian climate. The era of British control ended with the Treaty of Paris (1783) at the conclusion of the War for American Independence. The British agreed to return Florida to Spain.

When the Spanish regained control of Florida in 1784, the Franciscans tried to return the arsenal building to its earlier religious purposes. However, the military commanders decided they wanted it to remain a military station.  On May 25, 1792, the three-story wooden barracks, constructed by the English, burned down. The Spanish soldiers thereafter resided in the old convent, remaining there until Florida became American territory in 1821.

When United States assumed control in 1821, they initially utilized the convent as a jail. The early U.S. troops who resided at the barracks mainly guarded the Castillo de San Marcos, which they renamed Fort Marion. Around the Second Seminole War, troops brought into St. Augustine utilized the barracks as well. Several of the soldiers stationed at the barracks during the Second Seminole War became renowned military leaders in future wars, including Union generals George C. Thomas and William T. Sherman, as well as Confederate generals J. B. Magruder, James Longstreet, and Braxton Bragg. Some people referred to the military station as the St. Francis Barracks as early as 1838, but not with consistency until the 1880s. Other names used include, “St. Augustine Barracks, U.S. Barracks - St. Augustine - East Florida, and Fort Marion Barracks."*3

In 1848, members of the Catholic Church claimed the land should to go back to their control. However, an arbitrator did not find that the church had any legal title to the property, and the military retained control.

During the Civil War, control of the site shifted between U.S. and Confederate troops. On January 7, 1861, Confederate forces took Fort Marion and the St. Francis Barracks. The Union occupied and controlled St. Augustine after March 1862. In 1867, after the Civil War, the War Department rebuilt the barracks . During the Reconstruction Era, the army generally posted between two and four companies at the St. Francis Barracks. From time to time a few companies of the 34th and 82nd U.S. Colored Infantry resided at the barracks. On a few occasions around elections, the soldiers were stationed at several Florida cities to oversee voting. In 1898, because of the Spanish-American War, around 200 North Carolina Volunteers were stationed at the Barracks. This only lasted about a month due to the end of the war.

The barracks often saw reduced usage in peace time; in 1900, the US military abandoned the post. For a short while in 1901 it was used as a shelter for orphans and nuns after the Jacksonville fire. The state of Florida leased the buildings, starting in 1907, for use as their state military headquarters. The main building burned on December 13, 1915, leaving only the coquina walls.

Congress donated the St. Francis Barracks to the State of Florida "to be used for military purposes” in 1921.*4 The following year, after reconstruction, the barracks became the headquarters of the Florida National Guard again and remains so to this day. The rebuilt arsenal included space for offices, club rooms, and a 500-seat auditorium available for rent to patriotic groups. The Barracks saw increased use after the mobilization of the National Guard in 1940, and throughout World War II. Until 1949 the Barracks housed Florida’s State Selective Service.