An artist sketched this picture of the fort in 1872. Had it not been for the efforts of preservationists and the support of the government, this historic structure would have succumbed to the elements. 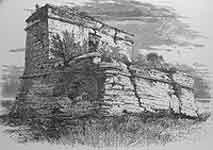 Visitors can tour this reconstructed fort, which contains many elements of the original fort constructed by the Spanish in the 17th century. 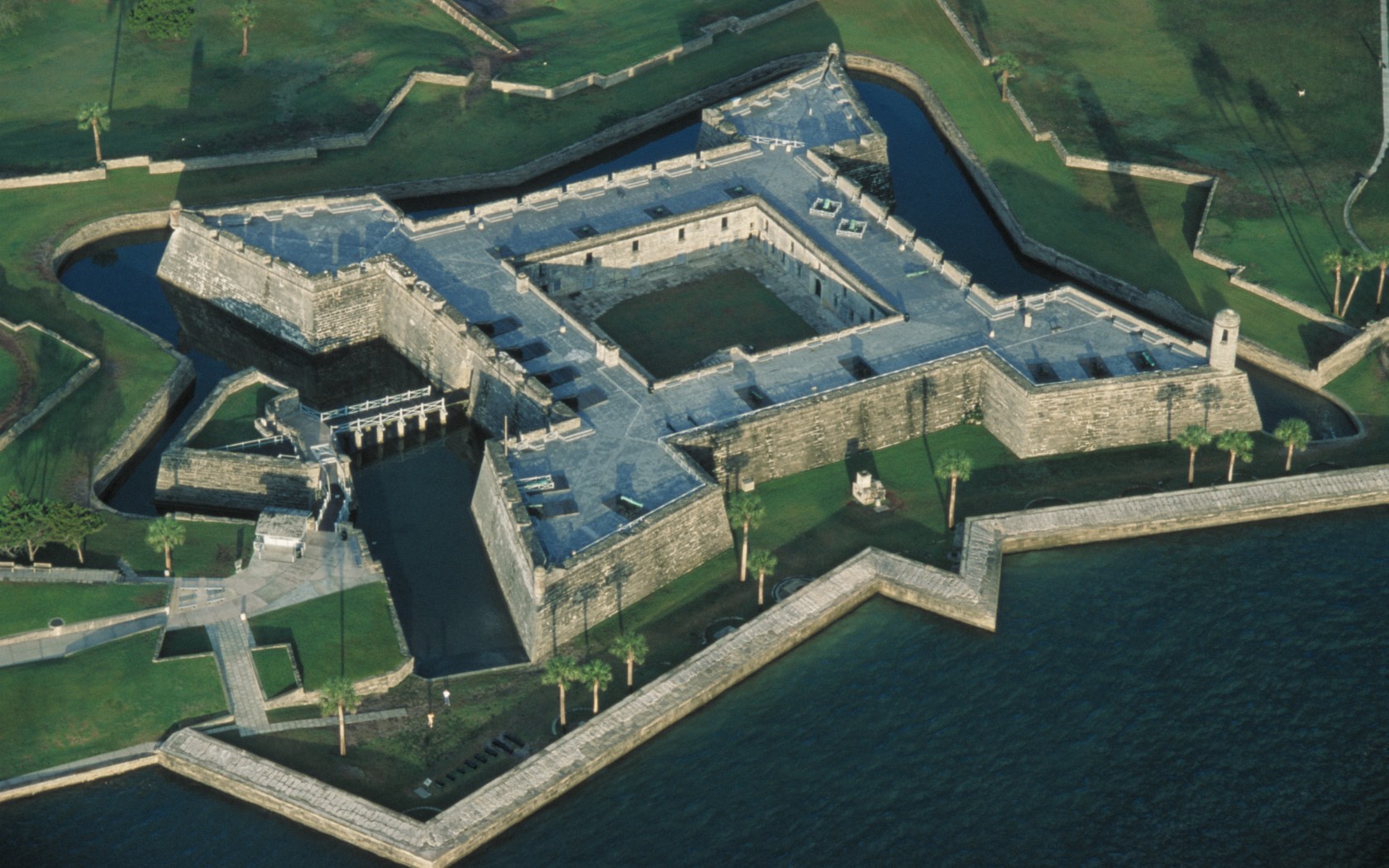 As the “Culture Trip” website states, the Castillo de San Marcos was “built from an indigenous and semi-rare stone composed of the shells of dead shellfish (called coquina)…Unlike other stones, coquina has a compressible nature, absorbing the blasts of projectile cannons rather than deflecting” (“A Brief History of Castillo De San Marcos, Florida”).

The distinctive bastion-style construction is an example of engineers adapting to the changing technologies of New World warfare. The star shaped design of the Castillo creates angled walls throughout the fort in order to reduce the likelihood of an enemy cannon being able to hit any of the walls with a straight shot.

The Beginnings Of The Castillo

The origins of this national monument trace back to the period just after Christopher Columbus’ last journey to the New World. The Spanish conquerors settled a huge and wealthy empire in the name of Spain that extends from the Caribbean to Central America, Colombia, Mexico, Peru, and Venezuela. The products obtained from these lands (e.g., sugar, cocoa, tobacco, pearls, exotic lumbers, metals, and dyes) gave them a great value and were loaded aboard galleons, “treasure fleets”, that sailed back to Spain, making it the Renaissance’s most powerful nation.

As a result of Juan Ponce de Leon’s voyages from 1513 to 1521, the conquerors knew that the best return-path to the Caribbean was along the Gulf Stream, traveling across the shores of Florida. It was really important for them to protect the peninsula so the enemies could not use it as a haven to attack the Spanish galleons.

Even though Spain claimed Florida in 1513, the French established a fortress at the mouth of the St. Johns River in 1564. Acknowledging this as a threat to the galleons and as an act of defiance toward Spanish claims, the King Phillip II sent an expedition, under the leadership of Admiral Pedro Menéndez de Avilés, to assassinate the French and settle in Florida. On September 1565, Menéndez’ fleet arrived to the mouth of the St. Johns River but were unsuccessful in their mission against the French, so they decided to navigate to a southern harbor and established St. Augustine as their base. A French fleet navigated south almost instantly to attack them but the bad weather wrecked their ships. Menéndez knew that the French fort would be slightly protected. The Spaniards traveled north, seized the fort, and killed most of its residents. The survivors of the French fleet suffered the same fate after the Spaniards captured them near the south of St. Augustine. This event from 1565 gave the place the name of “Matanzas”.
England became Spain’s new rival for Florida’s possession. Two events caused Spain to build the Castillo de San Marcos, the British pirates’ plunder in St. Augustine in 1668 and the Foundation of a new English colony in Charleston in 1670. Its construction began on October 2nd, 1672, and ended in 1695. The castle replace the nine wooden forts that had protected the city of St. Augustine since its foundation and its location on the west shore allowed the cannons guard the harbor’s entrance and the northern access to the city’s ground.

The fort saw only two significant attacks, both by British colonial leaders in the early 1700s. In 1702, during the War of the Spanish Succession, the English invaded the town and besieged the castle for 50 days without success. They decided to burn the town before moving out but the fort remained intact, becoming a symbol that links the old and the new St. Augustine. New lines of defense were set in the north and the west.

Matanzas was not fortified when General James Oglethorpe and the British soldiers from Fort Federica attacked in 1740. The Matanzas’ entrance was blocked and the castle, once again, besieged. The Spanish defenders did not vacillate during the 38 days in which they were besieged by the British. The invasion demonstrated Matanzas’ strategic value and the need to reinforce it, thus the Fort Matanzas was finished in 1742.

As a result of the Seven Years’ War, Spain ceded all of Florida to Britain in exchange for Cuba in 1763. The British dominated both fortresses until the end of the American Revolution.

With the Treaty of Paris of 1783, Spain reclaimed Florida and governed it until 1821, when it was ceded to the United States due to international conflicts. The castle’s name was changed to Fort Marion in 1825 and, then, was used as an Indian prison during the Second Seminole War from 1835 to 1842. Native leaders such as Osceola were imprisoned here during that conflict-the longest official war in American history. Although revered by many Americans at the time for his leadership and efforts to negotiate a peaceful settlement, the nature of the Seminole Wars were such that US troops were willing to take extreme actions against Native leaders. As a result, Osceola was captured under a flag of truce and placed in a cell in the old Castillo along with many other Native leaders.

In 1861, shortly after Florida voted for secession, Confederate troops took possession of Fort Marion from its lone inhabitant-an army sergeant assigned to take care of the fort. Recognizing its limited value, Confederate leaders moved the fort's cannon to other forts along the Florida coast. In 1862, the Union Navy occupied the area without a major fight and established batteries near the fort that thwarted Southern smugglers from utilizing the rivers and ports of St. Augustine.

In 1898, the fort was last used as a prison for deserters and mutineers during the Spanish-American War.

Following the war, the fort continued to deteriorate until preservationists and the federal government worked to restore what remained of the historic fort. “In 1924, President Calvin Coolidge designated the fort as a National Monument, and in 1933 the National Park Service took jurisdiction of it from the War Department. The Park Service continued to maintain the fort as a National Monument” (Carlisle126). As a way to recognize its Spanish heritage, the government reestablished the original name of Castillo de San Marcos in 1942.

On October 15, 1966, the National Register of Historic Places added the fort to its list. The American Society of Civil Engineers officially recognized it as a Historic Civil Engineering Landmark in 1975. It is also included in the Florida Black Heritage Trail documentation.

The fort is currently managed by the Florida State Park Service. According to their website, it is open to the public providing them the opportunity to explore its interiors, learn more about the site’s history, and witness gun firings and live reenactments (“Castillo De San Marcos National Monument”).