The stones the monument is made of are supposedly from the fallen chimney of his cabin, although the quarry faced stones used to construct the monument are not similar to pioneer stones masonry common at the time of the chimney's construction, but more consistent with early 20th century construction. Constructed in 1912 by Boone’s first mayor, the monument’s original cost was $203.27 (1). In 1969, as the university got larger and Faculty Street widened, the monument was moved (1). Other sources say that the monument was moved during the construction of Varsity Gym and Duncan Hall (2). Then, again, the monument was moved to another site, this time off campus on the grounds of Rivers Park (donated by Rachel Rivers Coffey to the town for historical purposes (4)). This project was spearheaded by the founder of Historic Boone, Gene Lewis Reese, and completed in 2005.

Many of the stories of the monument seem to have little evidence as to whether or not the cabin actually belonged to Daniel Boone at all. This brings up an interesting twist in the history of the town of Boone. Did Daniel Boone actually spend time in the area? To give some background on his importance for this small town, in 1900, 29 years after the town was incorporated (1),  the population of Boone was 155 and in 1918 -- 6 years after the monument was built -- the population was still only 374 (1). Having someone as famous as Boone live in this place would have made a great impact on the people of this area.

Daniel Boone was a pioneer who became a symbol for the american pioneer and a true national hero. Well known in Kentucky for his support and influence in setting up the frontier there and finding a trail through the Cumberland Gap as well as his help during the American Revolution (3), stories of his hunting trips to the High Country are very important for small towns like Boone. It was said that Boone first came to the area during extended hunting trips in the 1760s when Buttell, a cattle herder and slave to Benjamin Howard-- of Howard’s Knob-- led him over the Blue Ridge mountains and into Boone (1).The Daniel Boone Wilderness Trail, or the Buffalo Trail, which skirts the town of Boone, commemorates Boone’s great discovery (which Native American’s had already discovered by following the wild buffalo, hence the name) on finding the path through Cumberland Gap to pass through the Appalachian trails on the way to the new American frontier. 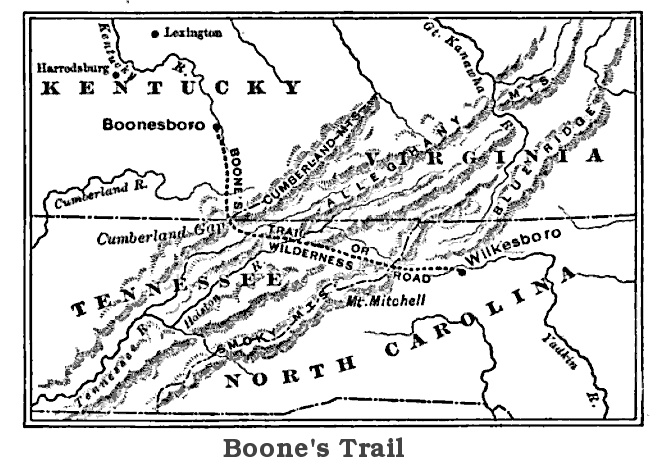 Whoever lays claim to this historic figure, it is clear that Daniel Boone’s supposed presence in this space has made a huge impact on the town of Boone and his story is intertwined with many of Boone’s historic figures. The first mayor, who had the monument built, was Col. William Lewis Bryan whose ancestor was Boone’s brother in law (1).

Another interesting piece of history of the monument itself is how much it moved around the town. The care that the city of Boone took to ensure the commemoration of an American pioneer and hero whose presence in this town may have only been legend shows how Daniel Boone’s ideals have stuck with this town. Perhaps the fact that the monument has moved around so much keeps the pioneer spirit of Daniel Boone alive. The history behind this monument makes one wonder about the significance of the facts of history and focus more on the importance of the impressions history makes on a place. It shows that myths and legends can have an impact. When you stand at this monument, think about the journeys that Daniel Boone made across the country and the hundreds of other american’s he influenced with the pioneer spirit.