The Tomb of the Unknown Solider Revolutionary War

The Tomb of the Unknown Soldier of the Revolutionary War is located in the burial yard adjacent to the Old Presbyterian Meeting House. In 1826, workers discovered the body of a man wearing a Revolutionary uniform during renovation and expansion of the Roman Catholic Church next door. The soldier’s body was reburied in the cemetery of the Old Presbyterian Meeting House but remained unmarked for years. Knowledge of the burial site was only kept alive by a handful of congregation members who would sporadically place flowers at the grave site. In contrast to the well-known Tomb of the Unknown Solider in Arlington National Cemetery in Arlington, this lesser known gravesite and memorial is only visited by a handful of people each day. 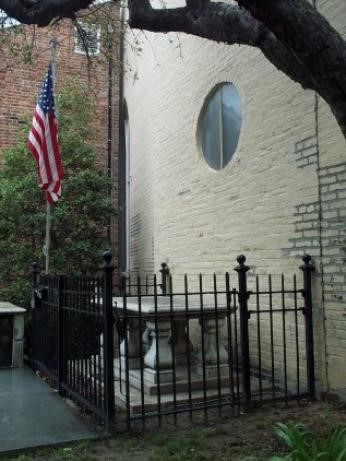 On the streets that regularly found the footsteps of Washington as he conducted business, went to church, walked about the town, you will eventually wander to the small and very much unknown grave site for the Tomb of the Unknown Soldier of the Revolutionary War. Alexandria was the site of many a battle in the Revolutionary War as America fought for her independence against the British monarchy.

While the gravesite remains mostly unknown with only a handful of visitors a day versus the thousands who attend the popular Tomb of the Unknown Solider in Alexandria, which features changing of guard and TAPS, it has been featured on various websites, such as army.com. These sites often want to give recognition to the small spot with such big significance. The spot is a reminder that lives were given for freedom. The lesser known spot still holds profound significance because it holds a life that believed in a set of ideals enough to take up arms and fight for it. So, while it doesn't hold the flash of a more well known site down the road, it still holds honor, sacrifice, and belief in something bigger than ourselves in a time that was so radical and unknown.

Initially, knowledge of the burial site was limited to a small number of local residents until the 1920s when renewed interest in the colonial period history inspired more individuals and organizations to preserve various landmarks. The Daughters of the American Revolution (DAR) took on the project known at the time as the Nameless Unknown Solider. On George Washington's birthday in 1928, DAR members placed a temporary marker to designate the final resting place for this unknown solider.  A year later, the permanent table top stone dedicated in a formal ceremony with members of the Old Presbyterian congregation, members of the DAR, the Secretary of War, and local residents. The epitaph reads:

“Here lies a soldier of the Revolution whose identity is known but to God. His was an idealism that recognized a Supreme Being, that planted religious liberty on our shores, that overthrew despotism, that established a people’s government, that wrote a Constitution setting metes and bounds of delegated authority, that fixed a standard of value upon men above gold and lifted high the torch of civil liberty along the pathway of mankind. In ourselves his soul exists as part of ours, his memory’s mansion.”

The Old Presbyterian Meeting House and the adjacent burial ground is open for visitors and residents of Alexandria. The Tomb of the Unknown Soldier of the Revolutionary War is set apart by an iron fencing. The church remains in operation with services on Sunday at 8:30 and 11 am with a fellowship service at noon.