The property was sold to Dr. H.F. Eames by Fred and Annie Hanson in 1902. Dr. Eames would use the building as a general store, selling wallpaper, paint and more 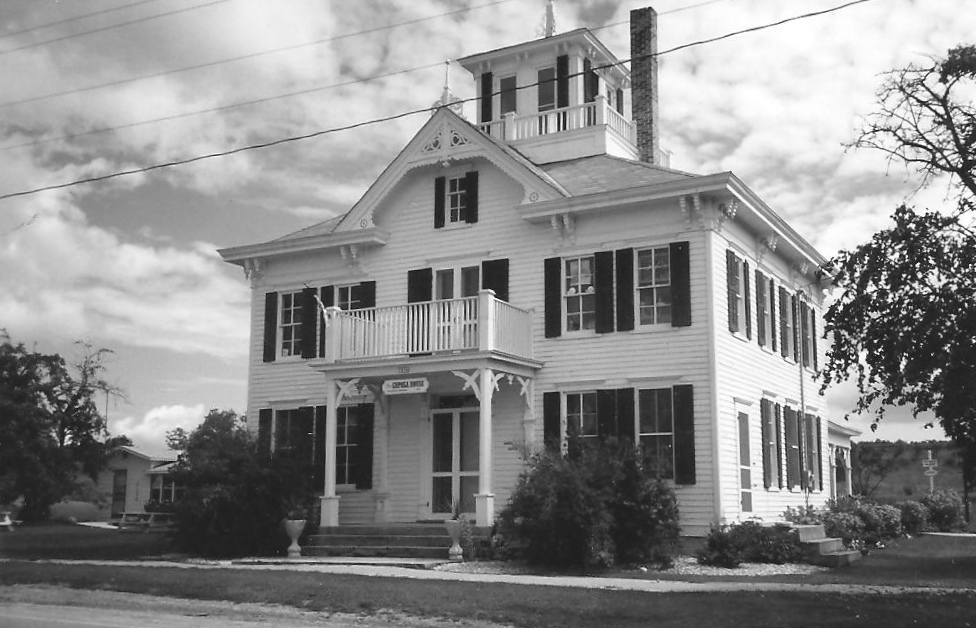 WHAT MAKES THIS PLACE SO COOL? Built in 1871, the Cupola House is a stately example of Gothic revival style architecture. Known for the iconic cupola adorning its roof, Levi Thorp built this historic home from money he earned during the famous California gold rush of 1849. The State Historical Society of Wisconsin in association with the U.S. Department of the Interior placed Cupola House in Egg Harbor, Wisconsin, on the National Register of Historic Sites in July of 1979. This magnificent house richly deserves this designation. WHAT IS THE CUPOLA HOUSE TODAY? The cupola house was purchased in 1980 by Gloria and Richard Hansen and was converted into an art gallery and gift shop. Opened to the public for the first time in its history in June of 1982, the Cupola House has continuity of quality and friendship – similar to Levi Thorp’s expectation for this house. 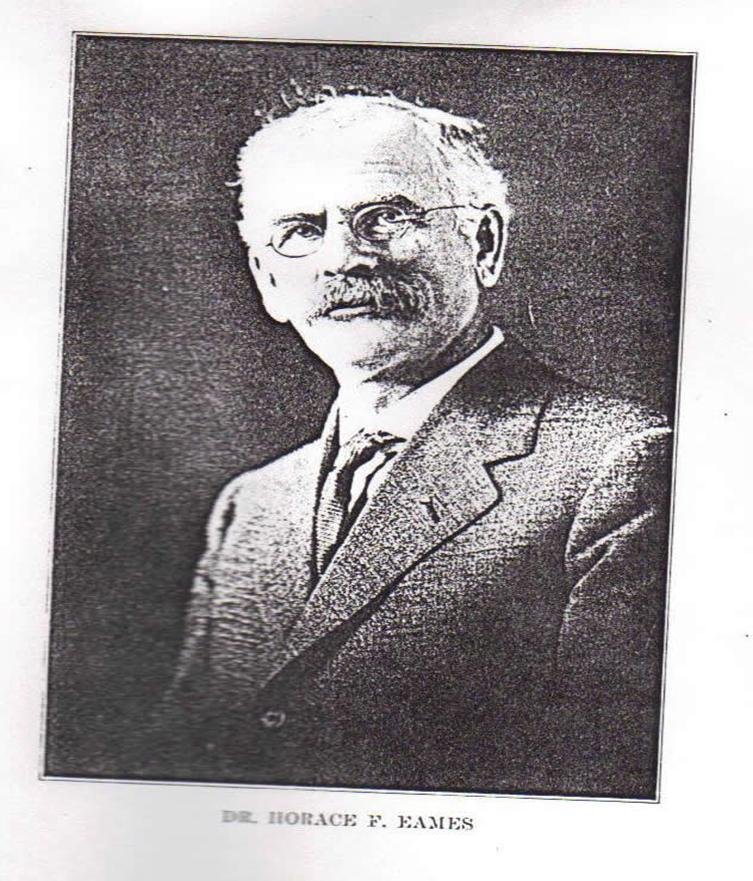 Now a Private Residence WHAT MAKES THIS PLACE SO COOL? Once the home and medical practice of Dr. H.F. Eames Dr. H.F. Eames was one of Egg Harbor’s most influential doctors, farmers, and property owners in the 1880s. His home “La Vista” saw nearly every citizen of Egg Harbor pass between its walls to receive treatment or companionship from Dr. Eames and his family. Building Backstory: La Vista was built in 1907 on the ridge east of the village as his home for his dairy farms and orchards. The house stood for many years as a base for Eames’s medical work, farming, and business ventures. La Vista, like Thorp’s Cupola house, became a popular spot for dances and gatherings, and was one of the most recognizable homes in the area. In 1993, the home was moved to its present location by Gloria and Richard Hansen of the Cupola House. 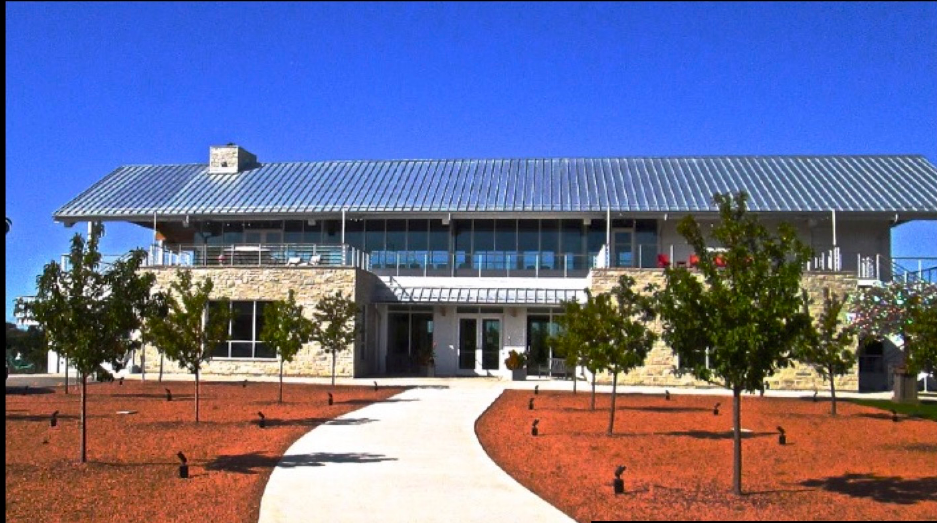 While not historic YET... the Kress Pavilion opened in 2018 and houses our new History Center on the first floor where the Egg Harbor Historical Society "Prepares,. Preserves and Presents" Egg Harbor (and countywide) history. We welcome you to visit as part of your tour or anytime. Small group programs, artifacts and research space is presented in the History Center. Large group programs meet in the "Great Hall" on the second floor. The second floor deck provides a grand surrounding view pf the bay to the west, the village to the south and the orchard to the east. 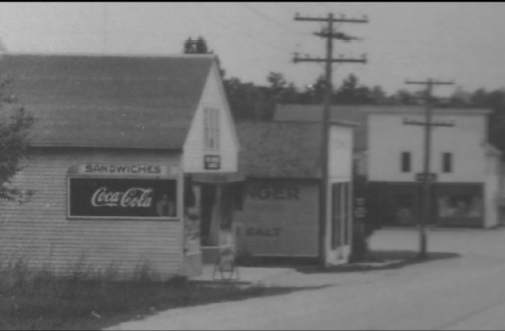 After owning the Harbor Inn with her husband 'Jack' from 1912 to when he died in 1931, Phoebe built the store and living quarters on land purchased from Charles and Ethel Cady in 1938. Phoebe had the only soda fountain in the village. The store was later owned by Earl and Louise Albrecht from 1948-59, and Elva and Henry Gilson from 1959-83. Amongst other wares over the years, the store most recently sold edible delights. Today it is Door County Massage

Truman Thorp's home was built in 1895. Truman was the son of Levi Thorp a founder of Egg Harbor. Other owners have been C.A. Speaker, E. Gagnon, and Otto Woldt who had a meat market in the home in 1921. Francis Bogenschutz had an electrician shop in the 40s and 50s. The building also housed a sport shop. Restaurants and gift shops have been recent businesses. Roy and Teri Bak purchased the building from a seasonal resident and remodeled it into the Parador. Larry and Rebecca Majewski now run the Parador. The original property was issued and registered by U.S. President James Buchanan on Dec.28, 1859.

9. The LaPlant House | The Concord Motel

Though the bright flowers on the exterior give away its purpose as a Mexican restaurant, This building was in fact a hotel for over 100 years. At multiple points it even included a barber shop!

Charlie Birnschein opened his garage in 1919 and operated it until 1927 when his brother Herman bought him out. The garage burned in 1947, Herman rebuilt and along with his gas station across the highway he continued the garage and gas station businesses until selling in 1965. 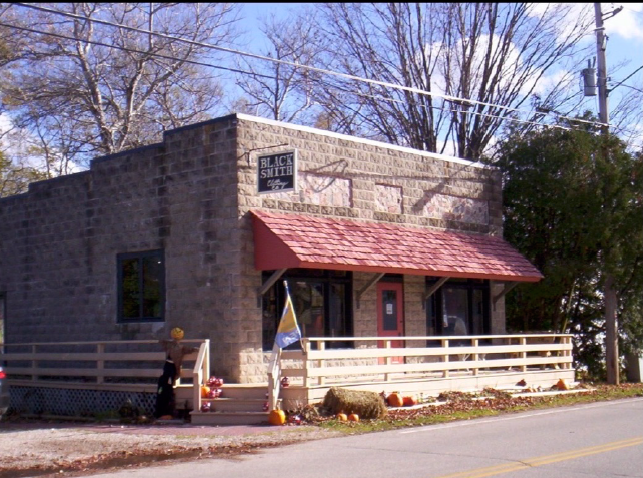 Worachek's Meats and Sausage Co. announced it's opening in 1934. It was constructed of stone cement blocks with decorative glacier 'hard head' stones on the front. An attached smoke house is still located in the back. It later served as a Blacksmith shop and hardware store.

It was Door County's largest resort, built by brothers Paul and John Bertschinger. It opened in 1922 with a main lodge, 20 cottages, and several service buildings that were expanded upon over the years. Some of the firsts at that time were indoor plumbing. Refrigeration was by means of an ice house with ice harvested from the bay during winter months. A 9 hole golf course was purchased in 1926 and additional 9's were added in 1948, 1976, and 2002.

Built in 1931 with the exterior stone coming f r o m t h e b a s e m e n t excavation. Believed to have had the first boiler and hot water system in the village. Paul, with his brother John, built the Alpine Resort in 1922.

Built by Antone Rushford about 1870, then purchased by Gideon (Jerry) LeMieux (Le- M e r e ) i n 1 8 8 9 . (Gideon changed his name to Jerry LeMere) The tavern was destroyed by fire in 1897 and Jerry rebuilt it with his sons Phillip, Jerry and Frank. It became known as Uncle Jerry's place where dances and socials were held in the dance hall on the second floor. 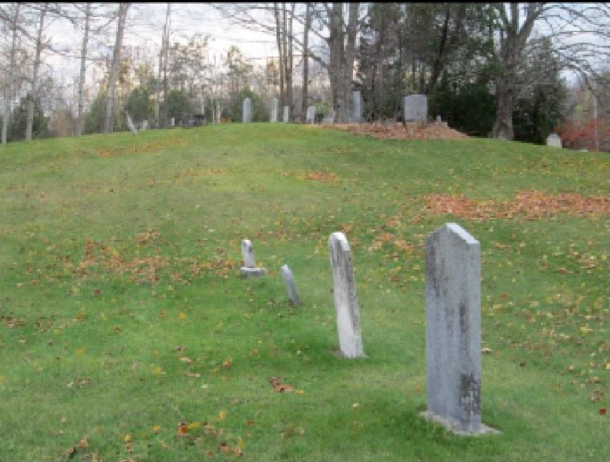 The first recorded burial in the cemetery was that of little one year old Eli Baker in 1861. 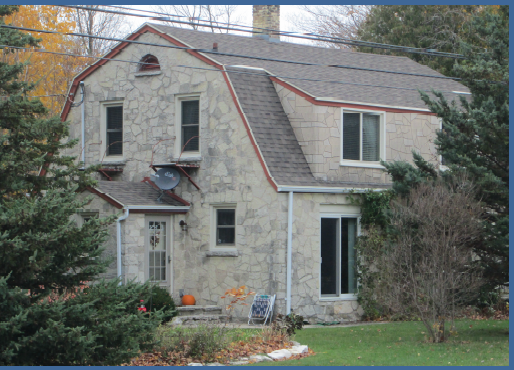 Built by Ed Kabat in 1938 of 'hard head' stones collected in the area. The stones were dropped by the ice age glacier.

Built in 1926 by Adolph Polzien as his home from logs salvaged from a granary building in Fish Creek.

Roy became chief of the Menominee Indians in 1932 upon the death of his father, Chief Reginald. Roy was a graduate of Carlisle College with an engineering degree and was recruited to work the ship yards in Sturgeon Bay during World War II. After the war he and his wife, Princess Ruth built his trading post in Egg Harbor in 1945. Roy and Ruth are buried in the cemetery across the highway

LaRouche constructed the building in 1885. Lester Olson rented it until Marvin Trodahl purchased it and opened as an IGA Store. The post office was in the north end of the store. Marvin built a small building to the north for the post office in 1954. After Marvin sold in the 60s, others who did business there were: Frank Schneider, Gene and Helen Standard, Art Witalison, Ed Pils, and now Shawn and Karen Peterson. 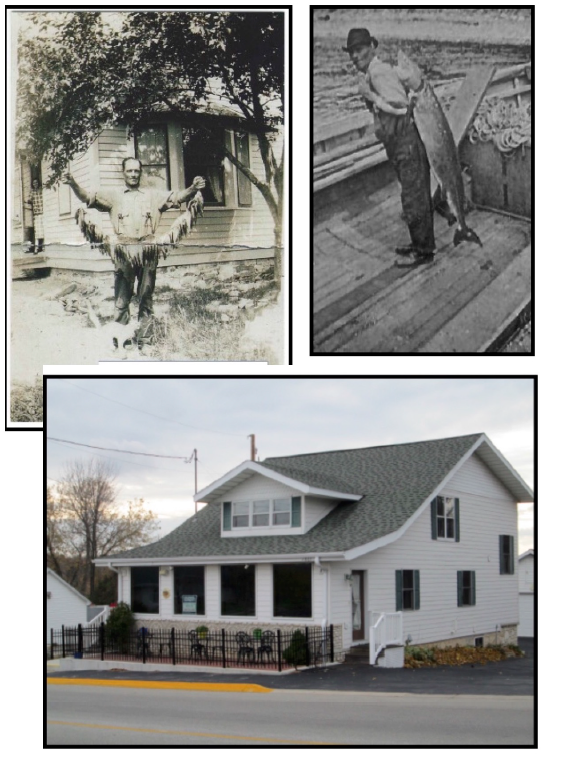 Built by Philip LeMere in 1923. The fine stonework on the front was completed in 1935 as a lower section of an open front porch. The stones were gathered from beaches as far away as Sister Bay. The designs were formed flat on the ground and when fully cured they were stood up in place and supported with a cement cap and corner posts. Philip's daughter, Celestia Moegenburg, passed away in 1989 and the home was sold to Tony Demarinis who enclosed the porch and reconstructed the original stone work. 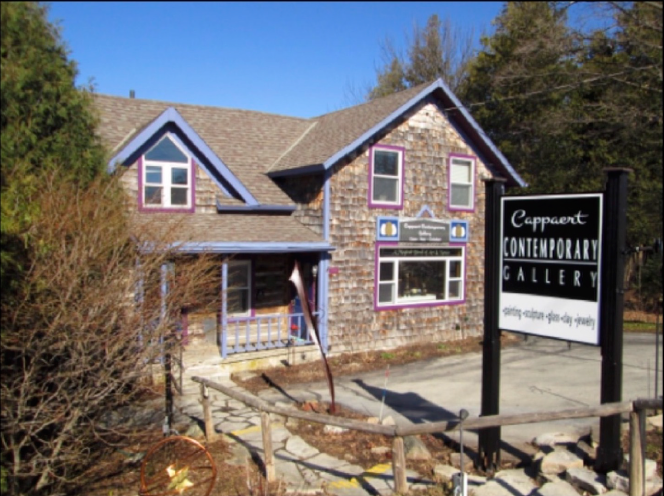 In 1910 H.F. Eames built the log home on land that was part of his estate. It was later sold to August Paschke in 1942 and remained in their family for 34 years. 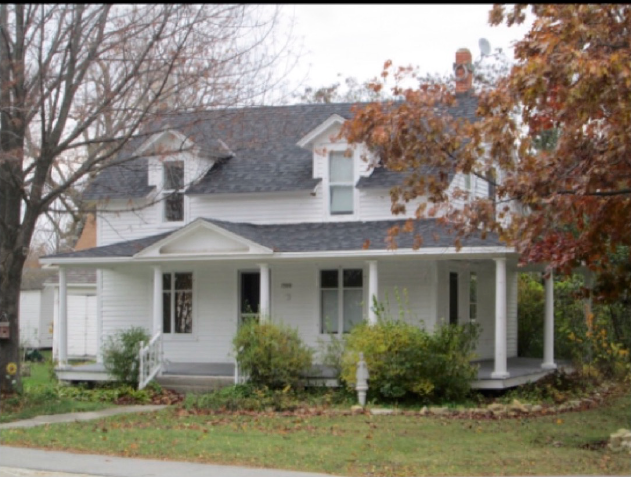 22. The Home of William Manney | Now a Private Residence

The land grant for the property was assigned by President James Buchanan in 1857. The Manney house was built in 1874 as a log structure

Mrs. Anna Manney gave the land to build the church in 1912. According to the deed it was established under the name of Egg Harbor Union Society. The church was started in 1912 and opened for services in 1924 as Calvary, World War I had held up the construction. In 1963 the congregation broke ground for a new United Methodist Church located around the corner on Cty. E. Old Calvary is now a chapel used just occasionally.

Late 1800s Michel Shack operated a saloon and bowling alley on the site, it burned in 1897. Jerry LeMere built 'Welcome Inn' here in 1908.

The original hall built in the 1880s burned and rebuilt immediately by Jerry LeMere. It was used for elections, social gatherings and as a protestant church before the Union (Calvary) Church was built.

26. Formerly the home of Tom Carmody

Tom built his home in 1905. He was best known for his road building abilities. He was also the Door County Highway Commissioner which may have been the reason the road through the village was one of the first paved in Door County.

The station was built by Norman (Bud) Kabat in 1949. Herman Forey laid the blocks and Bittorfs did the carpentry. Several people ran the station after Kabat, namely; Lloyd Logerquist, Appel, Clark, August and Roger Paschke, Ranney & Roggenkamp, Strege and Feldt. In recent years its housed numerous shops. It has been restored to the Shell motif in 2021 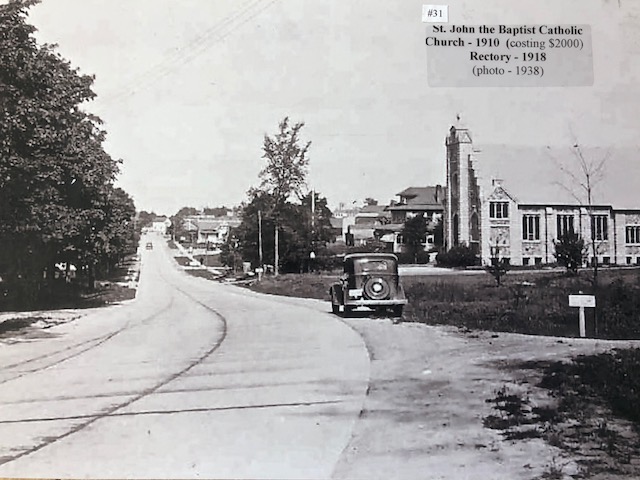 The church was dedicated on October 5, 1910 and the bell tower was finished a year later. Land was donated by Charles and Delia LaRouche. It is believed it cost $2000 to build. Families pledged either labor or $100 to build the church. The adjoining Rectory was completed in 1918. Renovation of the church interior was done in 1973 to implement Vatican II changes and redecorating was again done in 1992. The shrine in honor of the Blessed Mother was donated by Felix and Julie Milfeld in 1964. The church is now of the Stella Maris Parish which includes northern Door County Catholic Churches.