Harriet Tubman led nineteen trips through the South to guide three hundred slaves to freedom through the Underground Railroad. The Underground Railroad was a system of safe houses and transport for slaves to Free states or Canada arranged by multiple abolitionists. Harriet was known as the “Moses”; the women who led slaves to the “Promise Land”, freedom. Artist Alison Sarr chose to illustrate Harriet not as a conductor of the railroad, but the train itself. She was an unstoppable locomotive who worked to save people from the chains of slavery for the majority of her life. “Freedom felt empty unless you could share it with loved ones.”

The bounty for Harriet Tubman to be returned for $300. 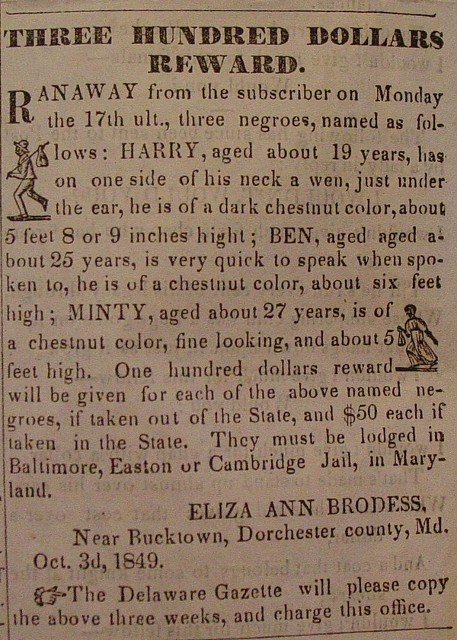 Over time, Harriet made nineteen trips and guided about 300 slaves to safety. She saved numerous people’s lives and became known as the “Moses of her People”. “God’s time is always near. He set the North Star in the heavens. He gave me the strength in my limbs. He meant I should be free.” - Harriet Tubman 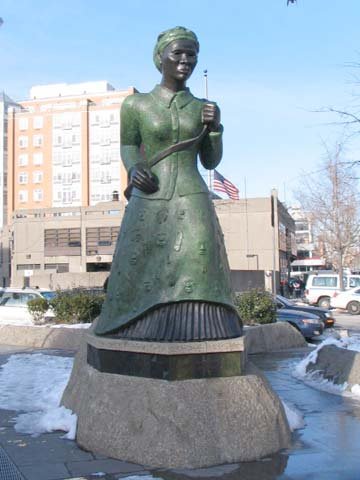 Plack beside of the Statue of Harriet Tubman, "Moses of her People" 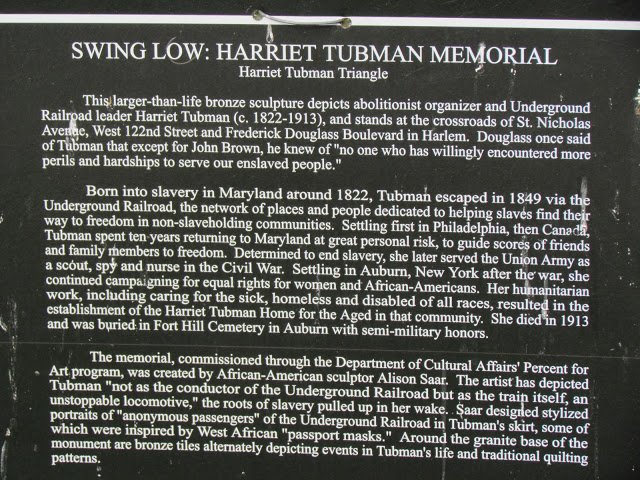 “Freedom felt empty unless you could share it with loved ones.” - Harriet Tubman 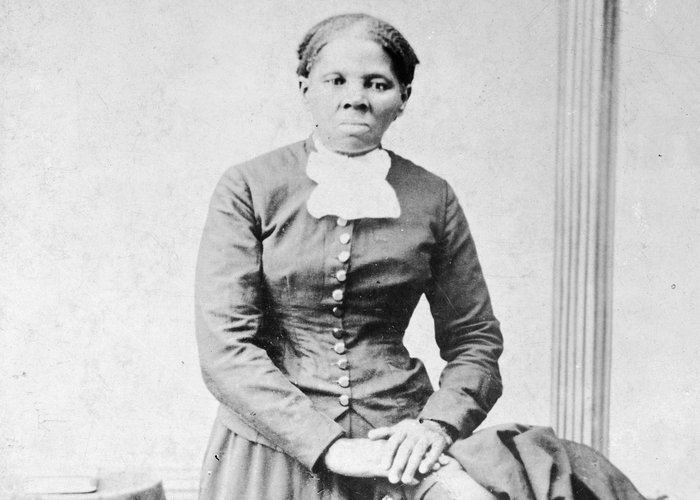 Harriet Tubman took her husband’s last name, and her mother’s first name, around 1844. Before escaping she changed her name so it would be challenging to track her. Harriet was originally born into slavery in Dorchester County, Maryland and given the name of Araminta Ross. She was nicknamed “Minty” by her parents Harriet and Benjamin Ross. Both Harriet’s parents were owned by separate families until a couple from each side was married. Her mother was a cook, and her father was an expert woodsman who directed other slaves to cut and log timber for the shipbuilding business.1-23

By the age of five, Tubman was “rented” to be a nursemaid and housekeeper. Harriet’s duty was to lay awake throughout the night so the baby wouldn’t cry. When the baby did wake up the mother, she would whip Minty around the neck leaving first of many scars on Harriet that would never heal. Harriet had many other jobs before escaping, including collecting muskrats from traps. She was required to “wade through the water” looking for rates. This caused her to be wet from the waist down for hours. Harriet eventually got the measles and became extremely weak.1-23

In her early teen years, Harriet was moderately disabled from a head injury that caused her to fall asleep in the middle of her everyday activities. Tubman was in the grocery store at the same time as a fugitive slave. The slave’s master threatened him so, he did his best to escape. When he started to run off, the overseer picked up an iron weight and tried to throw it at him. Harriet stepped in the doorway blocking his path. The slave owner hit Tubman and crumpled her skull leaving another scar triggering her sleep spells.1-23

In September 1849, rumors were spread that she and many others would be sold to relinquish her owner’s debts. Harriet and her brother’s decided to break their own chains and run towards freedom in the North. They travelled at night following the guidance of the North Star. In the middle of their journey, her brothers decided to turn back, but Harriet kept pushing forward with her faith. After about two weeks a notice was sent out to find her with a three hundred dollar reward. Her journey was about 90 miles alongside the Choptank River from Delaware to Pennsylvania until Philadelphia. In scenes in the Life of Harriet Tubman, Harriet said, “I had crossed the line. I was free, but there was no one to welcome me to the land of freedom. I was a stranger in a strange land; and my home, after all, was down in Maryland; because my father, my mother, my brothers, and sisters, and friends were there. But I was free, and they should be free.”1-23

Tubman saved up money cleaning homes in Philadelphia, so she could help her family become free. Once she found out that her niece Kessiah and her children were about to be sold, Harriet made her way back. She crossed the Mason Dixon Line, with the help of Kessiah’s husband they escaped and found shelter for her family. Harriet made James, Kessiah’s son, into her “protégé”. Tubman paid for James’s schooling at St. Catharine’s. He later became a school teacher and was later elected to the Legislature of Reconstruction, after the Civil War. Throughout the next ten years, Harriet returned to Maryland’s Eastern Shore around a dozen times. She rescued about seventy family members and friends. In one of Harriet’s many biographies it writes, “She used disguises; she walked, rode horses and wagons; sailed on boats; and rode on real trains...She bribed people. She followed rivers that snaked northward. She used the stars and other natural phenomena to lead her north.”1-23

Tubman established multiple strategies during her time of saving slaves. She advised people to leave on Saturday for Sunday was the “day of rest”, their masters would not find out until Monday morning that they had fled. Additionally, announcements of runaway fugitive slaves would not be posted till Monday. Harriet always left at night, she preferred to lead people to safety in fall because the nights lasted longer. She carried a gun with her to not only have protection but to remind people they could not turn back. For if the fugitive slaves turned back the risked the journey to freedom for others. The map that directed her when there were no clouds she would continue to follow the North Star. However, on a cloudy night, she would look at the moss “growing on the north side”.1-23

Tubman knew to always use back roads, waterways, mountains, and swamps to evade the slave owners. Over time, Harriet made nineteen trips and guided about 300 slaves to safety. She saved numerous people’s lives and became known as the “Moses of her People”. “Tubman was called “Moses” as an analogy to the biblical story of Moses who attempted to lead the Jews to the Promised Land that freed them.” Slaves would sing freedom spirituals, including “Go Down Moses, let my people go!” as a reminder that their “savior would deliver them from slavery just as Moses did the Israelites from slavery.” 1-23

Harriet Tubman had much faith in Christ. When she would have her sleeping spells from her head injuries, it is said that she had vivid dreams of God guiding her. “God’s time is always near. He set the North Star in the heavens. He gave me the strength in my limbs. He meant I should be free.” She lead people to safety through with the Underground Rail Road up until the civil war. Throughout the Civil War Tubman worked as a nurse, cook, and spy. "After the war, she settled in Auburn, New York, where she would spend the rest of her long life. She died in 1913."1-23