African Americans in Louisville protested segregation throughout the 1950s with mixed results. Though school integration passed in 1956, much of the rest of Louisville life remained racially segregated. The anti-segregation movement reached a critical mass in February 1960 when the a delegation of white and black community leaders expressed frustration at the failure of the city council or Mayor Bruce Hoblitzell to support their demand for a municipal ordinance banning segregation. In the spring of 1961, in part inspired by the successes seen in Greensboro, NC, the African American community effectively acted to organize major stand-ins in local department stores. 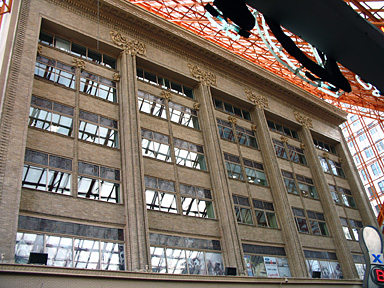 A 1961 protest against segregation near Kaufman-Straus Department store. 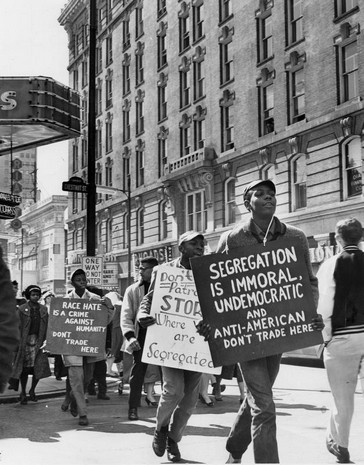 Tracy K'Meyer: From Brown to Meredith: The Long Struggle for School Desegregation in Louisville, Kentucky, 1954-2007. Available for purchase by clicking the link below. 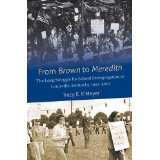 Tracy K'Meyer: Civil Rights in the Gateway to the South: Louisville, Kentucky, 1945-1980. Available for purchase by clicking the link below. 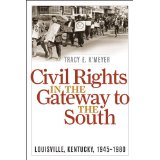 Tracy K'Meyer: Freedom on the Border: An Oral History of the Civil Rights Movement in Kentucky. Available for purchase by clicking the link below. 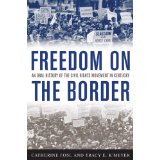 "Nothing New For Easter" Campaign, Spring 1961. 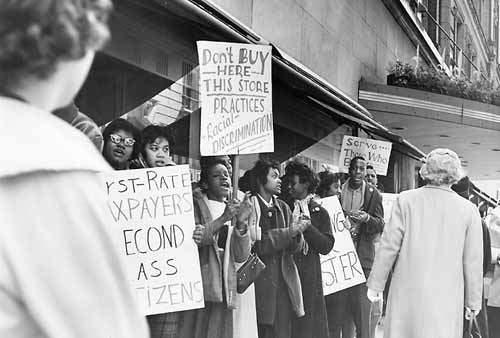 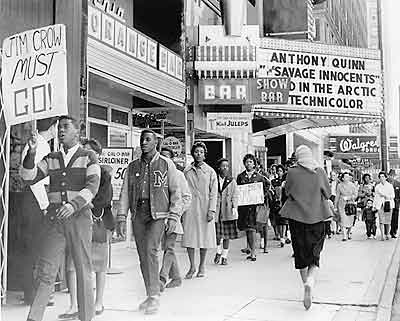 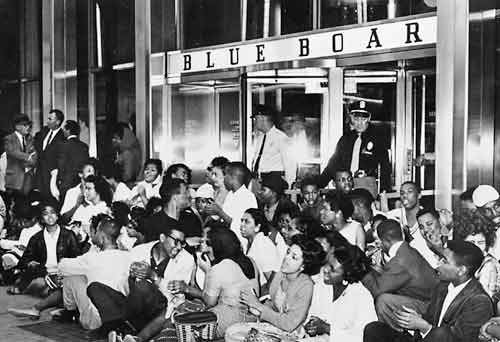 The NAACP Youth Council and CORE rallied a massive campaign, during which hundreds of African American students joined protests against segregation in the spring and summer of 1960. Sit-ins were held in the Kaufman-Straus Department Store, Stewart's Department Store, the Blue Boar restaurant, and other locations in downtown Louisville's 4th Street shopping district. The students and community leaders increased their efforts the following year, introducing a "Buy Nothing New for Easter" campaign where 75,000 participants vowed that they would not purchase anything from any store that discriminated against black customers.

The protests led the management of Kaufman and Stewart's to request negotiation in 1961, but neither store proceeded towards integration. The joint department store sit-ins began under the leadership of Raoul Cunningham on February 9, 1961. On February 20, the police arrested Cunningham and four teenagers. By the spring of 1961, over 700 residents of Louisville had been arrested--more than in any other city in the nation. Between 1961 and 1962, African Americans continued their pickets, boycotts, and sit-ins, seriously disrupting business in the downtown area. Recognizing that these protests threatened their city's economy and might also disrupt the Kentucky Derby, Louisville businesses began to serve black patrons, and the city became the first major city south of the Mason-Dixon Line to bar racial discrimination in public accommodations in the spring of 1963.