The Harvard Union, ca. 1910. At this time the Union was still a social club intended as an alternative to the more elite social clubs on campus. 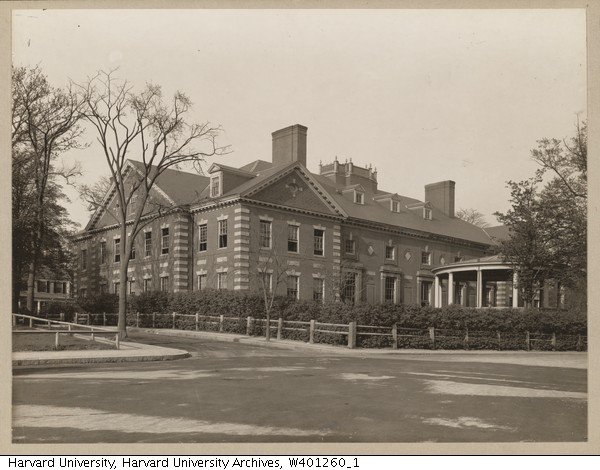 1936 photo of the Freshman Library in the Harvard Union. After the start of the House system the Union transitioned into an institution solely used as a center for freshman life. 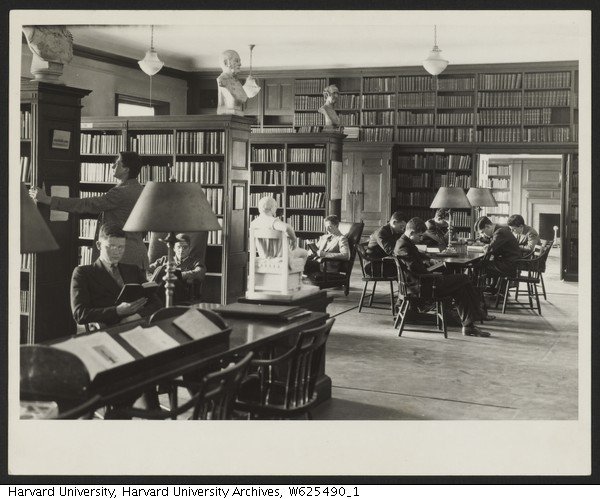 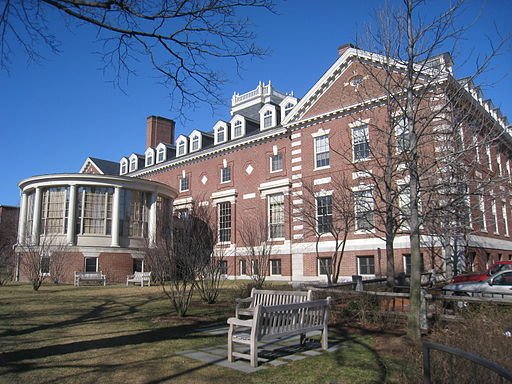 The modern-day Barker Center compromises the Harvard Union, Burr Hall and Warren House. It was named after and dedicated to Robert R. Barker (class of 1936) and his wife Elizabeth S. Barker on September 12, 1997.

In 1895, historian W.R. Thayer first proposed the construction of a university club based on models at Cambridge and Oxford. He saw a need for social shift given the growing student population and growing tensions between elitists and nonelitists. Thayer secured a $150,000 donation from Major Henry L. Higginson, the founder of the Boston Symphony Orchestra.[1] Higginson’s egalitarian hope was to create a club where “pride for wealth, pride of poverty, and pride of class would find no place.”[2]

This ultimately gave ground to the Harvard Union which aimed to be a place where all Harvard men, regardless of social class, could meet “on equal footing.” For a small yearly membership fee all students could have access to dining rooms, a library, billiards room, and other common spaces. The location was chosen to be equidistant from elite “Gold Coast” student dorms and those in the yard as an attempt to bridge the gap between freshmen of different means.[3]

Upon its completion, the Union was widely celebrated for its initiative as an inclusive social space, including by poet Charles Warren who wrote of the new Union: “This is the House of Fellowship./ [...] Here, no bar of classes or creed:/ Here, no lines of club or breed:/ Here, one common cry, God-speed/ To every Harvard son.”[4] However, by 1912, membership of the Harvard Union had declined and it was clear that final clubs would continue to maintain social dominance.[5]

In 1931 the creation of the University housing system created other social spaces and the original space was redeveloped into a freshman activity and dining center and the offices of the school newspaper, The Crimson. It was renamed the ‘Great Hall’ and the dining hall portion was dubbed ‘the Freshman Union.’[6] Few people complained with the exception of recent alumni “who grumbled something about the $50 Life Membership appearing valid only for the life of the Union, not its members.”[7] However, even with this new development in the purpose of the Union, it retained its ineffectiveness in putting Harvard freshmen on equal footing. Although there is not much documentation on the specific ways in which underrepresented and lower class groups could not use the Freshman Union in the same way as wealthier students, the book Making Harvard Modern recounts how in the 1930s the quarter of Harvard students who commuted from home did not feel at home in the Union, the place most available to them, as a result of the high meal prices.[8]

In 1996 and 1997, there was a $23 million dollar renovation, and freshman dining hall was moved to Annenberg, and the Union became the Barker Center for the Humanities. This new center included two seminar rooms and a large atrium and maintained much of the original wood paneling to “preserve much of the feel of the old Union.” At this time, the iconic elk-horned chandelier attributed to Teddy Roosevelt (class of 1880) was hung in the center of the complex. The ceiling of the complex was notable for another reason as well–according to the Harvard Crimson, underclassmen threw butter at it the 1930s to see if it would stick.[9]

[2] No Writer Attributed. “Building Is Now Center for Freshman Activities The Harvard Union Was Begun as Part of a Crusade for Democracy | News | The Harvard Crimson,” September 18, 1969. https://www.thecrimson.com/article/1969/9/18/building-is-now-center-for-freshman/.

[4] No Writer, “Building Is Now Center For Freshman Activities.”

[7] No Writer, “Building Is Now Center For Freshman Activities.”

from the Harvard University Archives.