Joan of Arc Statue is a gilded bronze equestrian sculpture of Joan of Arc by Emmanuel Frémiet. Bought by the Fairmount Park Art Association in 1890, the monument was at first placed at the east end of the Girard Avenue Bridge. Unappreciated at that location, it was moved to its present one in 1959, after being given its gilt coat in the basement of the Philadelphia Museum of Art. The sculpture represents Joan of Arc, a heroine of France and a Roman Catholic saint, astride a horse. Her proper right hand is raised and she holds up a flag in her proper right hand. In her proper left hand she holds the reins. She is crowned with a laurel wreath and clothed in armor. A sword hangs by her proper left side. The horse is walking with its front, proper left and rear, proper right hooves raised.

The original dedication took place on November 15, 1890.The pedestal was designed by the architect Paul Abadie. 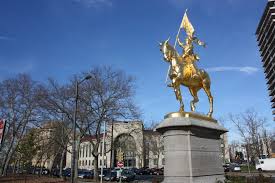 Joan of Arc statue in Philadelphia, By Emmanual Fremiet. 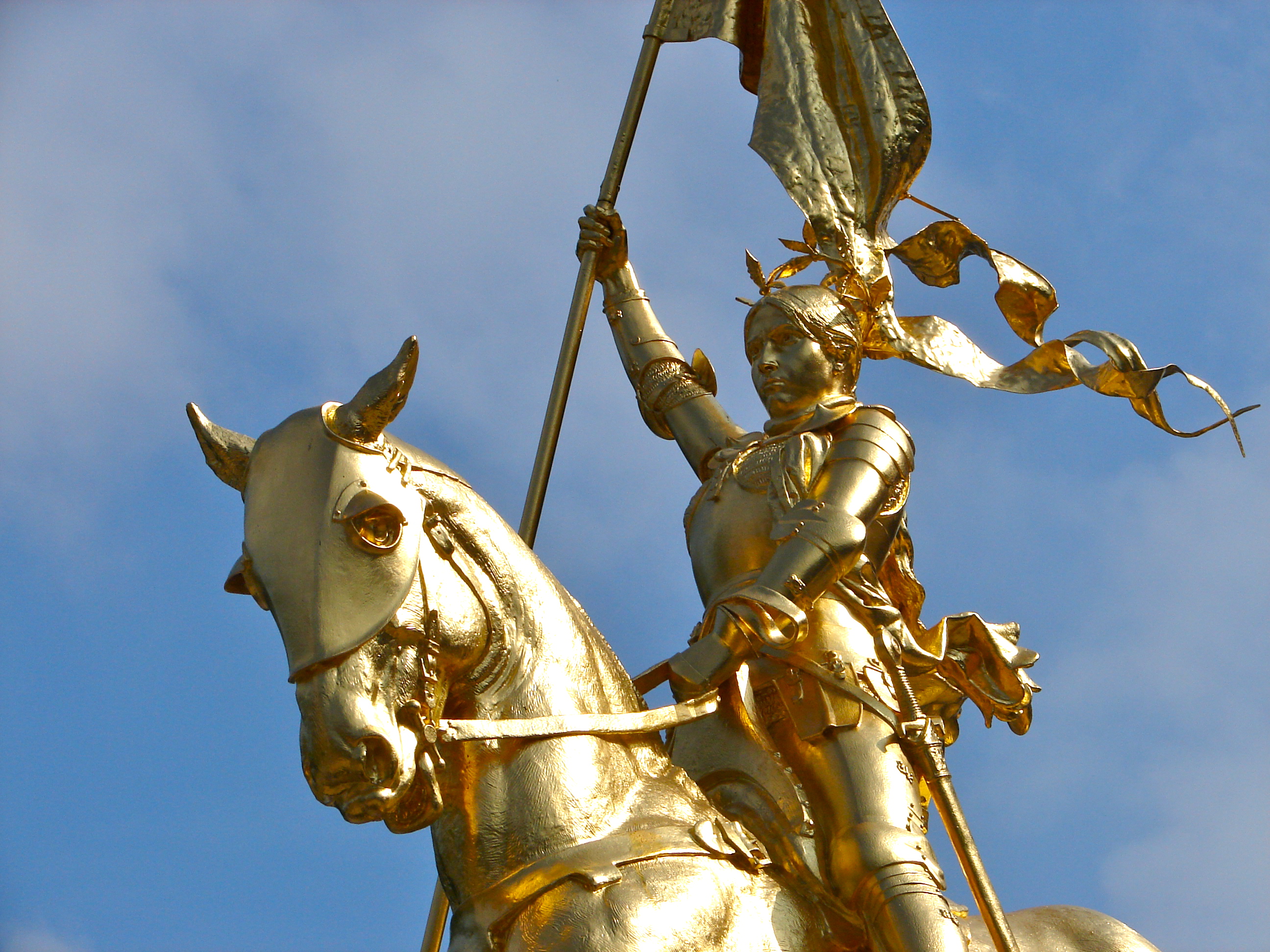 Joan of Arc was a peasant girl living in medieval France. She believed she could save her country, France, from the English conquerors during the Hundred Years' War. With no military training and acting under divine guidance, Joan secured the confidence of Dauphin (later King Charles VII) and led the French army in a momentous victory at Orleans in 1429. After seeing the prince crowned (King Charles VII), she was captured by the English and their French collaborators, tried for witchcraft and heresy, and burned at the stake in 1431, at the age of 19. The Maid of Orléans (as she was known) had long been considered national heroine and an enduring symbol of French unity and nationalism. On May 16th, 1920 she was canonized by Pope Benedict XV.

The original statue of Joan of Arc for Paris was commissioned in 1874 by Napoleon III, intended to help in re-establishing French confidence after the humiliating military defeat of 1870 by the Prussian army. Emmanuel Frémiet, French sculptor, had earned a reputation for his work incorporating human and animal motifs in the neo-realistic manner. To develop the memorial to the French heroine, Frémiet studied the design of fifteenth-century French armor and dress in order to convey the figure within her historical context. The statue was installed at the place where Joan was wounded, Place des Pyramides in Paris.

In 1889, when the members of the French community in Philadelphia wanted to commemorate their centennial, they arranged to purchase a cast of the original, Place des Pyramides Joan of Arc statue from the artist. They made a contract with the artist that there would be only three cast of this sculpture: the one in Place des Pyramides, the one in Philadelphia, and another one in France in the town of Nancy. The Philadelphia sculpture was purchased with the help of the Fairmount Park Art Association and was first installed on the eastern approach to the Girard Avenue Bridge Bridge on the Schuykill River. The original dedication took place on November 15, 1890. In 1959 the sculpture was gilded and moved to its present location near the Philadelphia Museum of Art by the Fairmount Park Art Association. In 2009, it was removed to repair a crack and re-gilded and returned to its current spot in 2010.