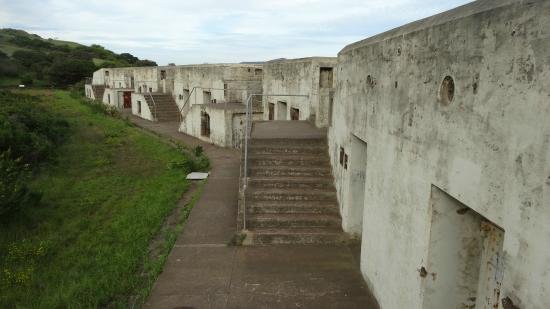 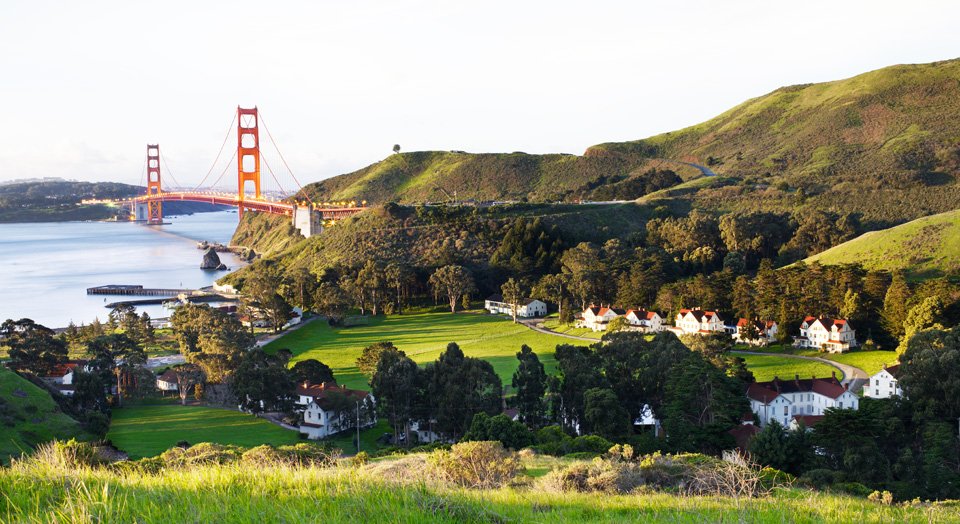 The Sixth ARADCOM Headquarters building in the background with a military parade for visiting military dignitaries in the foreground. 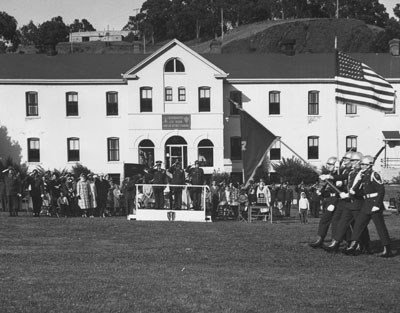 By 1860s many of the Army’s “modern” defense systems had become worn out, dilapidated, and deteriorated and the War Department expressed growing concerns about the neglected state of the country’s coastal fortifications. In response to this call of rearmament to their crumbling forts, the War Department concluded that all existing U.S. seaports and proposals to modernize and re-arm all the seacoast forts. The Endicott Board deemed San Francisco Harbor second only to New York’s in strategic importance. Along with rebuilding fortifications, the Army would focus on boosting morale among the soldiers with the construction of large and well-ventilated barracks that provided clean running water, ample interior space and modern, indoor toilet facilities, a commanding officer's residence, post headquarters, 12-bed hospital, and a fully-equipped gymnasium. In 1910 Fort Baker was completed and manned with a small force of nearby soldiers on call to defend San Francisco Bay

During the Second World War, Fort Baker played a vital role in the Harbor Defense of San Francisco, the division tasked with operational command over many San Francisco army posts,including Fort Barry and Fort Cronkhite. Fort Baker’s Horseshoe Cove was the home of the Harbor Defense’s mine depot, where Coast Artillery soldiers would load 800 pounds of dynamite into mines and then plant them underwater, outside the mouth of the bay, with a complex series of electronic cables. If the big guns from Fort Barry and Fort Cronkhite failed to stop an enemy vessel far offshore, the next line of defense was three minefields containing over 600 underwater mines outside the Golden Gate.

Just two years after the war, all guns, mines and any other remaining weaponry in the seacoast defenses of San Francisco were declared surplus, and the last weapons were removed in 1950. The Coast Artillery was deactivated that same year.

After the World War II, the threat of foreign attack on U.S. soil shifted from naval assault to air attack, particularly by aircraft carrying nuclear weapons. From the 1950s to the 1970s, Fort Baker was home to the Headquarters of the Sixth ARADCOM Region. The Sixth ARADCOM Region was responsible for 12 permanent launch sites for “NIKE” anti-aircraft missiles around the Bay Area. These missile sites would receive initial targeting information from an early-warning radar station with the help of information from the radars and computers, the missiles would prepare, if needed, to launch.

Fort Baker has been home to multiple Military units such as the Coast Artillery Corps, which was officially created in 1907 by the U.S. Army to protect and defend the nation’s harbors. The Corps would eventually be deactivated in 1950. The 91st Infantry Division which was responsible for creating training exercises for the Army National Guard, the Army Reserve Combat Support and the Combat Service Support units, and today home to the United States Coast Guard.