Founded by Anne Rice Cooke in 1927, the Honolulu Museum of Art, formerly Honolulu Academy of Arts, is Hawai‘i’s largest private presenter of visual arts programs, with an internationally recognized collection of more than 50,000 works spanning 5,000 years with significant holdings in Asian art, American and European painting and decorative arts, 19th- and 20th-century art, an extensive collection of works on paper, Asian textiles, and traditional works from Africa, Oceania, and the Americas. In addition, film and concert programs, lectures, art classes and workshops make the museum the city’s cultural hub. It also has one of the largest single collections of Asian and Pan-Pacific art in the United States.

Linekona building is the hub of the Honolulu Museum of Art's arts education programming. Credit: HMA 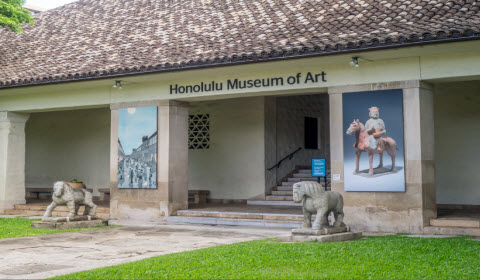 Anne Rice Cooke was born into a prominent missionary family on O‘ahu in 1853. Growing up in a home that appreciated the arts, she went on to marry Charles Montague Cooke, also of a prominent missionary family, and the two settled in Honolulu. In 1882, they built a home on Beretania Street, on the site that would become home to the museum. As Charles Cooke prospered, he and his wife began to assemble an art collection, starting with “parlor pieces” from the shop of furniture maker Yeun Kwock Fong Inn who had ceramics and textile pieces sent from his brother in China. Fong Inn eventually became one of Honolulu’s leading art importers.

When the Cookes’ art collection outgrew their home, Anna Rice Cooke decided to create Hawai‘i’s first visual arts museum, which would reflect the islands’ multicultural make-up, for the children of Hawai‘i. In 1920, she and her daughter Alice (Mrs. Phillip Spalding), her daughter-in-law Dagmar (Mrs. Richard Cooke), and Mrs. Isaac Cox, an art and drama teacher, began to catalogue and research the collection as a first step. With little formal training, these women obtained a charter for the museum from the Territory of Hawai‘i in 1922. The Cookes donated their Beretania Street land for the museum, along with an endowment of $25,000, and the family home was torn down to make way for the new institution. They hired New York architect Bertram Goodhue to design the plans. Goodhue died before the project was completed, and his colleague Hardie Phillip finished the job. Over the years, the museum's revival mission style has been imitated in many buildings throughout the state.

Since it opened, the museum has grown steadily, both in acquisitions and in stature, to become one of the finest museums in the United States. Additions to the original building include a library (1956), an education wing (1960), a gift shop (1965), a cafe (1969), a contemporary gallery, administrative offices and 280-seat theater (1977), and an art center for studio classes and expanded educational programming (1989).

From Anna Rice Cooke’s vision has grown one of the most beautiful and extraordinary museums in the world with state-of-the-art facilities for displaying its internationally renowned art collection. It is the state’s leading arts institution and the city’s center for visual and performing arts. The Academy’s mission continues to reflect Mrs. Cooke’s vision by being dedicated to the collection, preservation, interpretation, and teaching of the visual arts, and the presentation of exhibitions, performing arts, and public programs specifically relevant to Hawai‘i’s ethnically diverse community.

The Honolulu Museum of Art School, opened in 1990 in the historic Linekona building, and is the hub of the Honolulu Museum of Art's arts education programming. Education was the driving force behind the founding of the museum, and the museum has offered classes and tours since it opened in 1927. Today, the Art School reaches approximately 60,000 children and adults each year through studio art classes, workshops with visiting artists, school programs, outreach programs, and exhibitions.

The museum’s mission is to bring together great art and people to create a more harmonious, adaptable, and enjoyable society in Hawai’i. Their values include finding inspiration from great art, responding to new art, committed to be accessible to all, responsible stewards of our institution, value creativity and respect innovation and doing all of this with aloha.

Heu, Olena. A Walk Through the Honolulu Museum of Art Will Leave You Wanting More. Hawaii. Accessed January 18, 2018. https://www.hawaii.com/oahu/attractions/honolulu-museum-of-art.