Built at some point between 1897 and 1899, the Hokes Mill Covered Bridge is one of two extant covered bridges in Greenbrier County. The $700 bridge was built to provide access over Second Creek to nearby Hokes Mill. The approximately eighty-one by twelve-foot bridge is one of only five extant covered bridges in West Virginia to be built using Long trusses. Though the Hokes Mill Covered Bridge was modified in the twentieth century, a 2001 restoration largely restored it to its original condition. These days, the bridge accommodates only pedestrian traffic. 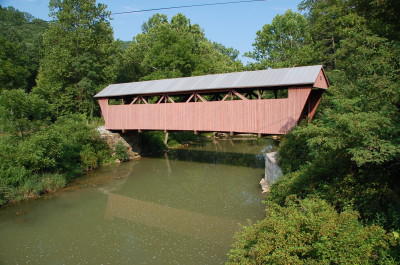 Interior of the bridge. Note the Long trusses on the sides 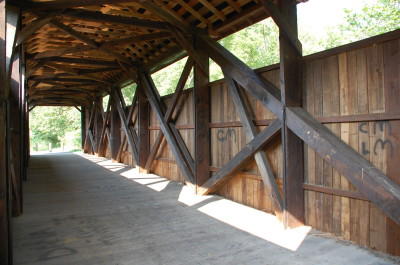 The Hokes Mill Covered Bridge was built at some point between 1897 and 1899, though exact dates are difficult to pin down. In April of 1897, the Greenbrier County Court appointed B. F. Mann, R. A. McDowell, and Austin B. Erwin as commissioners for a new covered bridge crossing Second Creek. The bridge exists on record beginning in the summer of 1899, placing the construction before this date at the very least. The bridge was intended to provide local access to the nearby Hokes Mill. The amount allocated for the construction of the bridge was $700 – a little over $20,000 in today’s money.

At over eighty-one feet long, the Hokes Mill Covered Bridge is a respectable length for a covered bridge. It measures twelve feet wide. The red board-and-batten siding is capped by a standing seam metal roof. The bridge is supported by a series of Long trusses. This truss style was patented in 1830 Stephen H. Long. The defining feature of this style is that the trusses are constructed entirely from wood, with no metal components. The trusses consist of a series of vertical posts spanned by diagonal cross-beams .