The first and only institution in America established by Congress to "disseminate information about the United States Constitution," the 160,000-square-foot National Constitution Center explores the history and historical significance of the Constitution through high-tech exhibits, artifacts, and interactive displays.

The Center’s 525 Arch Street address was specifically chosen because May 25 (5/25) is the date that the Constitutional Convention began in Philadelphia in 1787. 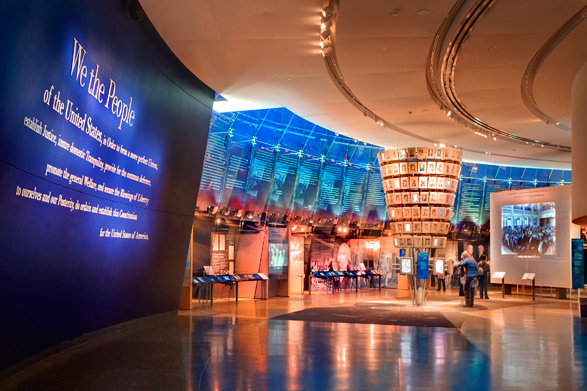 The Kimmel Theater, a 350-seat star-shaped theater, features “Freedom Rising,” a multimedia production combining film, a live actor and video projection on a 360° screen to tell the stirring story of “We the people.”

On September 16, 1988, President Ronald Reagan signed the Constitution Heritage Act of 1988 which established the National Constitution Center. The act called for a national center “within or in close proximity to the Independence National Historical Park” that “shall disseminate information about the United States Constitution on a nonpartisan basis in order to increase awareness and understanding of the Constitution among the American people.”

The Center broke ground on September 17, 2000, 213 years to the day after the Constitution was signed. The Center’s 525 Arch Street address was specifically chosen because May 25 (5/25) is the date that the Constitutional Convention began in Philadelphia in 1787. The Center opened its doors on July 4, 2003.