Burning of Pennsylvania Hall in Anti-Abolitionist Riot of 1838

The Pennsylvania Anti-Slavery Society built Pennsylvania Hall and dedicated the building on May 14, 1838. The building hosted a three-day convention of the city's female abolitionists, but before the end of the meeting, a mob had assembled to disrupt the meeting and attack the women for their opposition to slavery. Although Pennsylvania passed laws providing for the gradual end of slavery in their own state shortly after the American Revolution, many white residents of the city believed that the abolitionists were encouraging black migration to the area. They also believed that abolitionists were to blame for the growing political strife between the North and the South. The mob grew extremely violent by the third day of the meeting, encouraged by members of the police who seemed to countenance the violence against abolitionists and their property. On May 17th, only three days after the dedication of the building, the anti-abolitionist mob set fire to Pennsylvania Hall and attacked anyone who tried to save the building.

A contemporary artist's rendition of the destruction of Pennsylvania Hall helped raise awareness of the crime and the attacks against abolitionists in Philadelphia that peaked in 1842.

Antislavery and Abolition in Philadelphia: Emancipation and the Long Struggle for Racial Justice in the City of Brotherly Love - Click the link below for more info about this book 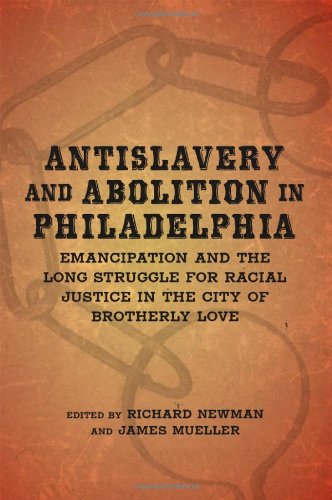