This museum and welcome center opened in 2002 and is located in a replica of the historic Matewan Station. The original depot was established in 1893 and was a bustling location in the coal town of Matewan until the last train came through in 1969. Even though the depot is fairly new, the building is full of authentic historic artifacts and offers exhibits and guides to welcome you to this historic part of the country and its connection to coal mining and labor history. Even the origin of the name Matewan is colorful, as Matewan is the namesake of a few townspeople who arrived in the 1890’s. The name combined the name of a favorite pet in one family and the hometown of another man who journeyed to the area a few years later.

The museum is located inside a replica of Matewan Station from the era of steam-powered trains and the coal boom of the early 20th century.

An undated historical photo of the station. 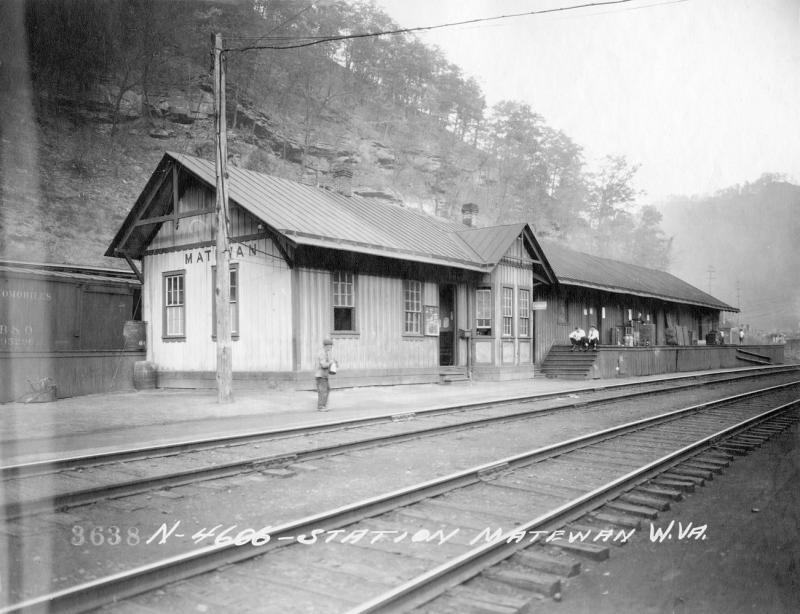 Matewan and the surrounding area has a rich yet violent history, revolving around coal, the railroad, and flooding. In the early 19th century, the Ferrell family settled in the area along the northern edge of Tug Fork, a then-unnamed tributary. Legend has it that Richard Ferrell named the tributary Mate Creek after his favorite dog, Mate. The remainder of the town's name is attributed to Erskine Hazard – a civil engineer working for the Norfolk and Western Railway (N&W, now Norfolk Southern). Hazard mapped out the community already developing along the north edge of the Tug Fork in 1890 and suggested naming the settlement after his hometown of Matteawan, New York. An abridged version of the name, Matewan, became common usage, likely to match the name of the nearby creek. The railroad reached the town in 1892, which attracted newcomers to the area, as did available jobs at the nearby mines of the Williamson Coal Field. Coal companies built housing for workers throughout the area and Matewan was incorporated in 1895.

In the early 1900s a railroad depot became the center of community life. This was particularly true for Matewan, as it became one of the most historically significant stations along the 673-mile Norfolk and Western main line. The original Matewan Depot, constructed in 1893, was a combined passenger and freight depot that served the population of nearly 7,000 in Matewan and the surrounding area. Large quantities of coal passed through on its way east, and passengers could take the train east toward Bluefield or northwest to Williamson and beyond.

After N&W-made its last stop in 1969, the once proud depot was closed and eventually fell into disrepair. In 2000 an initiative to rebuild the historic Matewan railroad depot began. It now serves as a welcoming center for the town of Matewan and a museum that includes information on the colorful history of the area, including the Hatfield and McCoy Feud, the Matewan Massacre, and the development of the coal mining industry in the region. It also houses a gift shop which offers locally made arts and crafts, t-shirts, historical books, and Hatfield & McCoy Trail memorabilia. The 24 x 110 ft. reconstruction is an inch-for-inch, Smithsonian-quality representation of the steam era Matewan station.