The Elmer Holmes Bobst Library (often known as The Bobst Library, or just "The Bobst") is the flagship institution of the 11-unit New York University (NYU) library system, and is named after the philanthropist, Elmer Holmes Bobst, whose gift made the library possible. Designed by distinguished architects Philip Johnson and Richard Foster and first opened in 1973, it is a twelve-story red sandstone building, located opposite the southeast corner of Washington Square Park in New York City's Greenwich Village. It is the primary research facility for NYU and currently serves 6000 people every day, who check out over a million books a year. It also houses many other print and non-print resources. As the library's website states, “Bobst Library's special collections and archives house significant resources, rare books, personal papers [and] University history.” 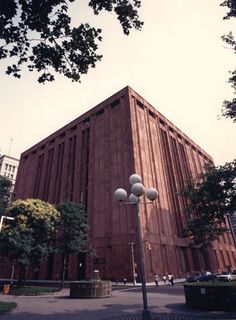 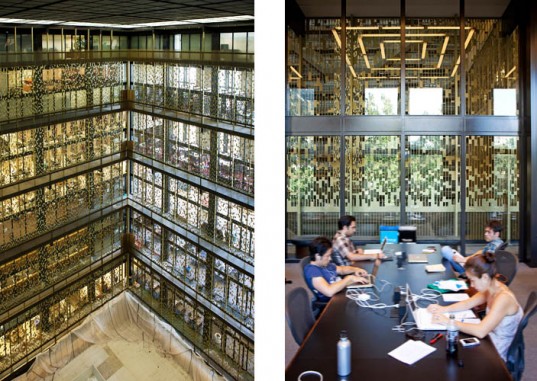 In 1964, two architectural firms were chosen to submit proposals and the team of Philip Johnson and Richard Foster won. They had previously collaborated on the famous Glass House in New Canaan, Connecticut, and the New York State pavilion at the 1964 New York World’s Fair. Construction began in the late 1960s, and when the Bobst Library opened in September 1973, the building was well received, though the design had a few critics who felt that it blocked sunlight into the nearby park.

The Avery Fisher Center for Music and Media contains one of the largest academic media archives in the world with 48,000 videos, 115,000 audio recordings in various formats, and 102,000 print items, such as books, periodicals and scores. The library also contains several special collections. The mission of the Fales Library & Special Collections is to acquire, preserve and provide access to a wide range of primary research materials in their original formats. It offers rare books and manuscripts in several categories: English and American literature, the Downtown Collection, the Food and Cookery Collection, the Riot Grrrl Collection, and the general Special Collections of the NYU Libraries.

The Tamiment Library and Robert F. Wagner Labor Archives is a well-known center for scholarly research on organized labor and left-wing politics. According to the library's website, its "primary focus is the complex relationship between trade unionism and progressive politics and how this relationship evolved over time. Archival print, photographic, film, and oral history collections describe the history of the labor movement and how it related to the broader struggle for economic, social, and political change." The New York University Archives serves as the repository for NYU's historical records, documenting the history of the University and providing source material for administrators, faculty, students, alumni, and others. Poly Archives exists to collect, preserve, and provide access to the records of the former Polytechnic Institute and the current School of Engineering.

When a homeless sophomore named Steve Stanzak revealed on his blog that he was literally living in the Bobst Library's basement (which is open 24 hours a day every day) due to a lack of student housing he could afford, he became a minor celebrity. The administration responded by giving him a free dormitory room for the semester, free of charge. Stanzak claims that the resumption of his anonymity after his brief brush with fame bothered him "just slightly."