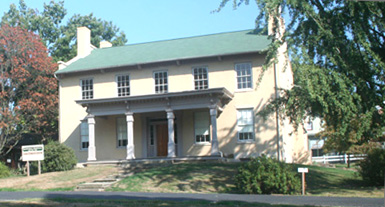 Reasin Beall was born on December 3, 1769 in Montgomery County, Maryland. He joined the military in his early twenties and was appointed battalion quartermaster under famed Revolutionary War hero General “Mad” Anthony Wayne by 1793. Beall moved to Ohio in 1801. During the War of 1812, he became a brigadier general of the Ohio militia. From April 20, 1813 to June 7, 1814, Beall filled a vacancy in the U. S. Congress after Representative John S. Edwards died. Beall returned to Ohio, moving to Wooster and building this home, after his term as congressman. He remained politically active by serving as the register of the land offices at Wooster and Canton, Ohio for ten years. Reasin Beall passed away on February 20, 1843. His daughter Elizabeth and son-in-law Joseph Stibbs II lived in this house after his death.

The College of Wooster later obtained the property and used it as a dormitory called Bowman Hall. In 1957, the college donated the Beall-Stibbs house to Wayne County Historical Society of Ohio. All collections from the society and the Wooster Museum were moved to the house. Recently, the structure was converted from a museum to a recreation of how the house looked in the 19th century.