The Nath Sculpture Garden is located in front of the Art Museum and Art Education Center. He Zhenhai’s steel and stone "Bridge" is the first piece to greet visitors. 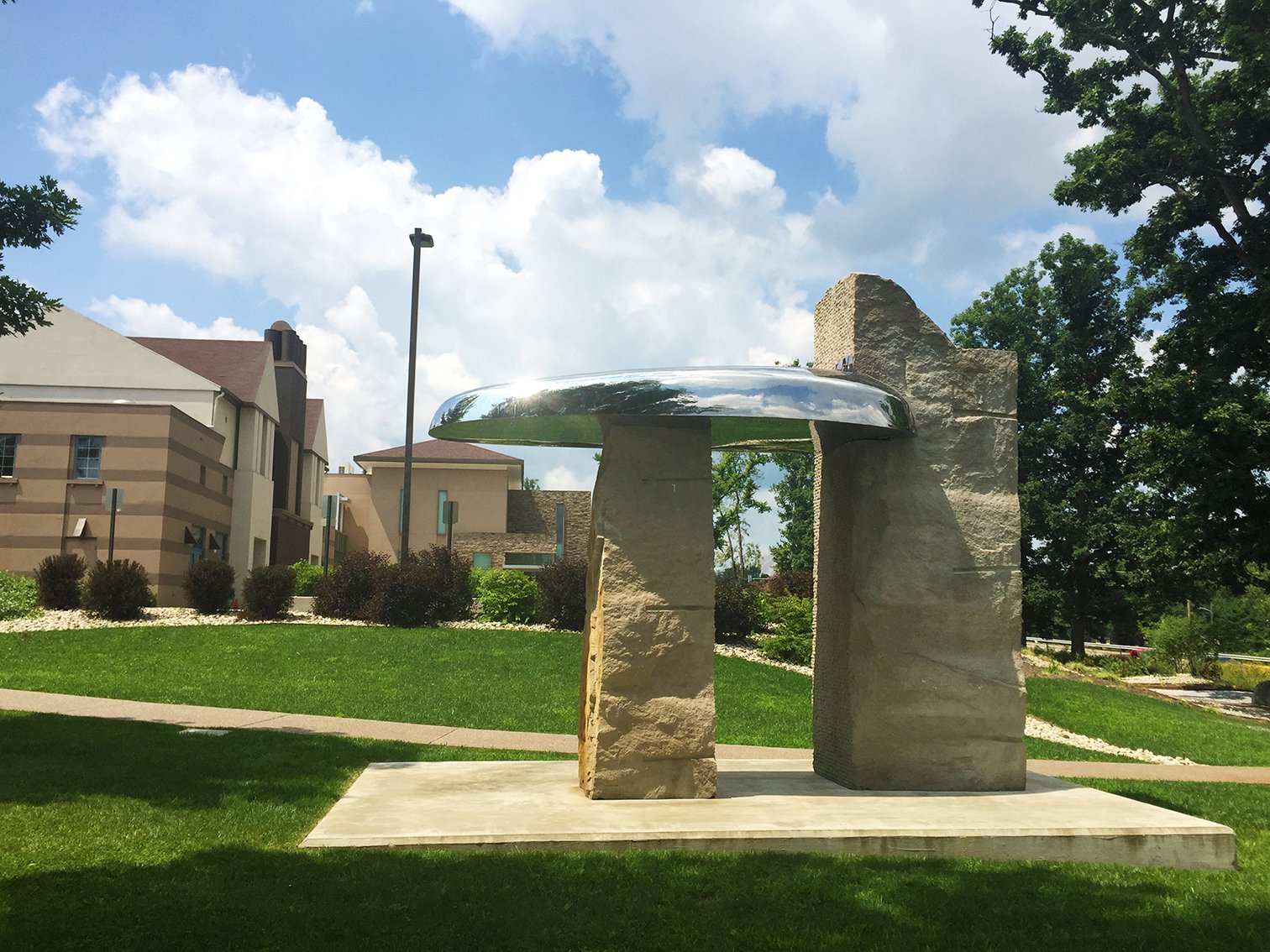 This ornate lantern honors the life of Dr. Nath, an award-winning geneticist who also enjoyed the arts. 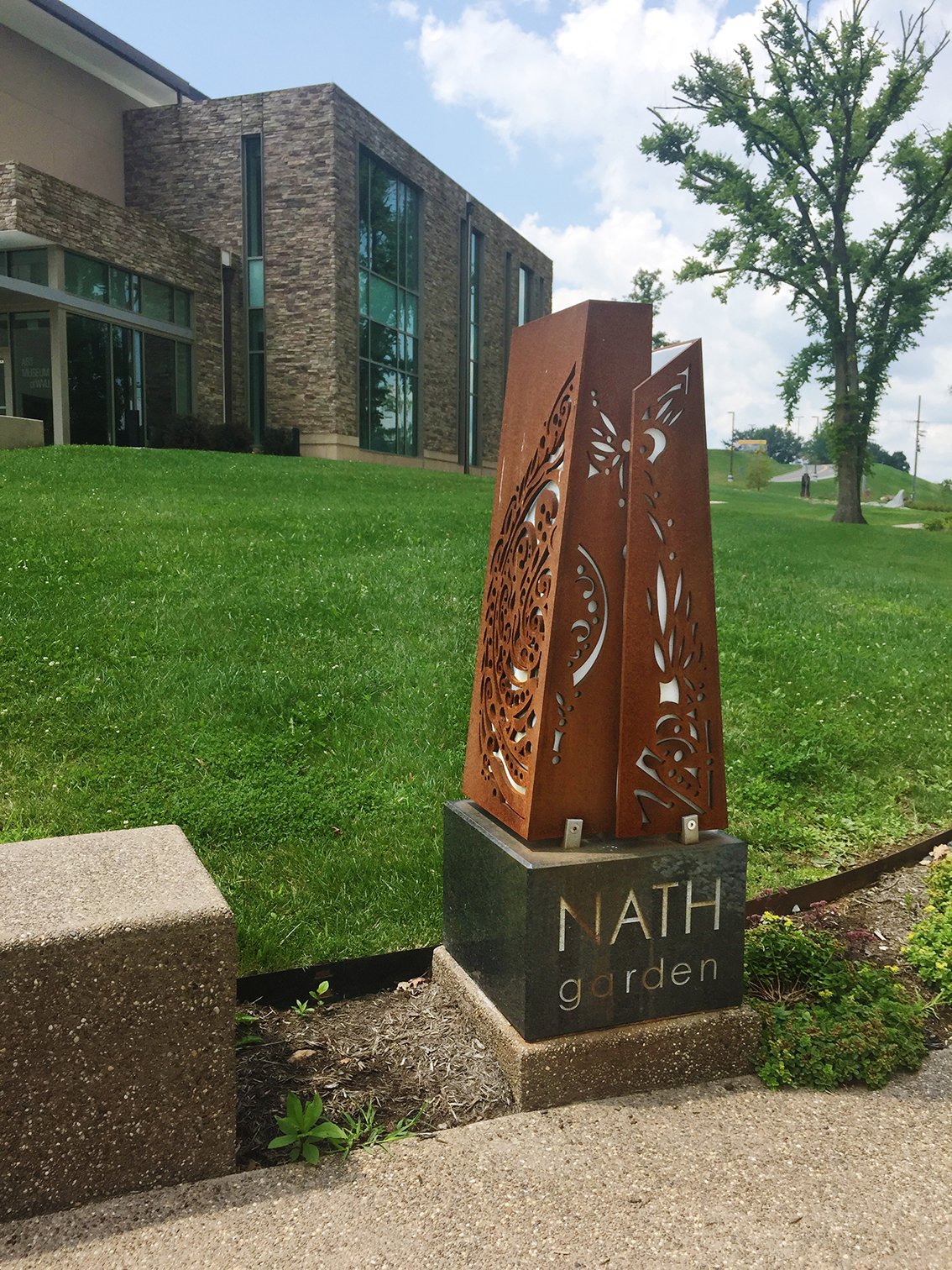 The sculpture garden's paths and flower beds swirl across the landscape to create a unique experience for visitors. 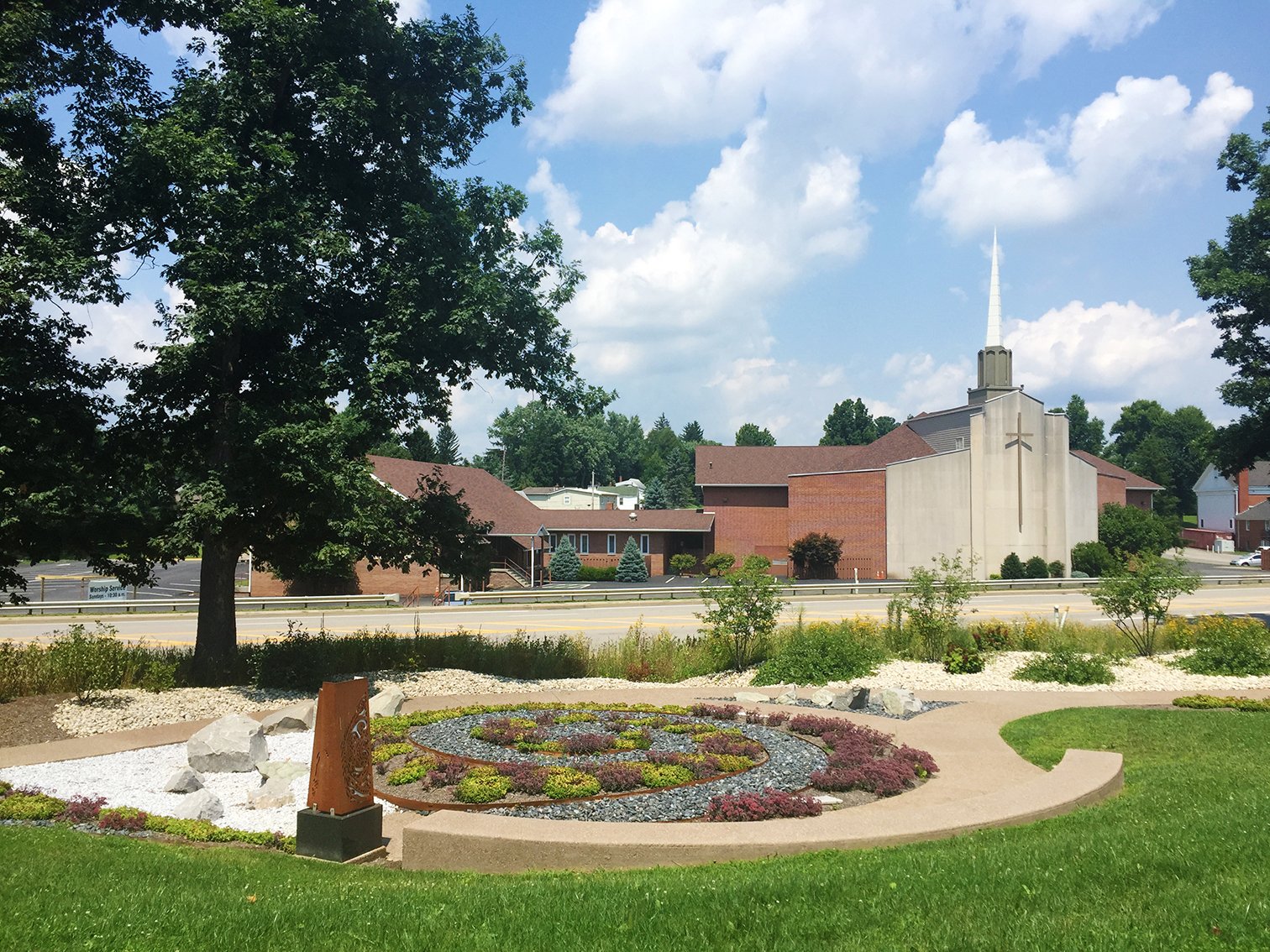 Bernard Matemara’s "Protecting her Eggs." Matemara was one of the first sculptors who developed modern stone sculpting in Zimbabwe, inspiring the country's art renaissance in the late twentieth century. 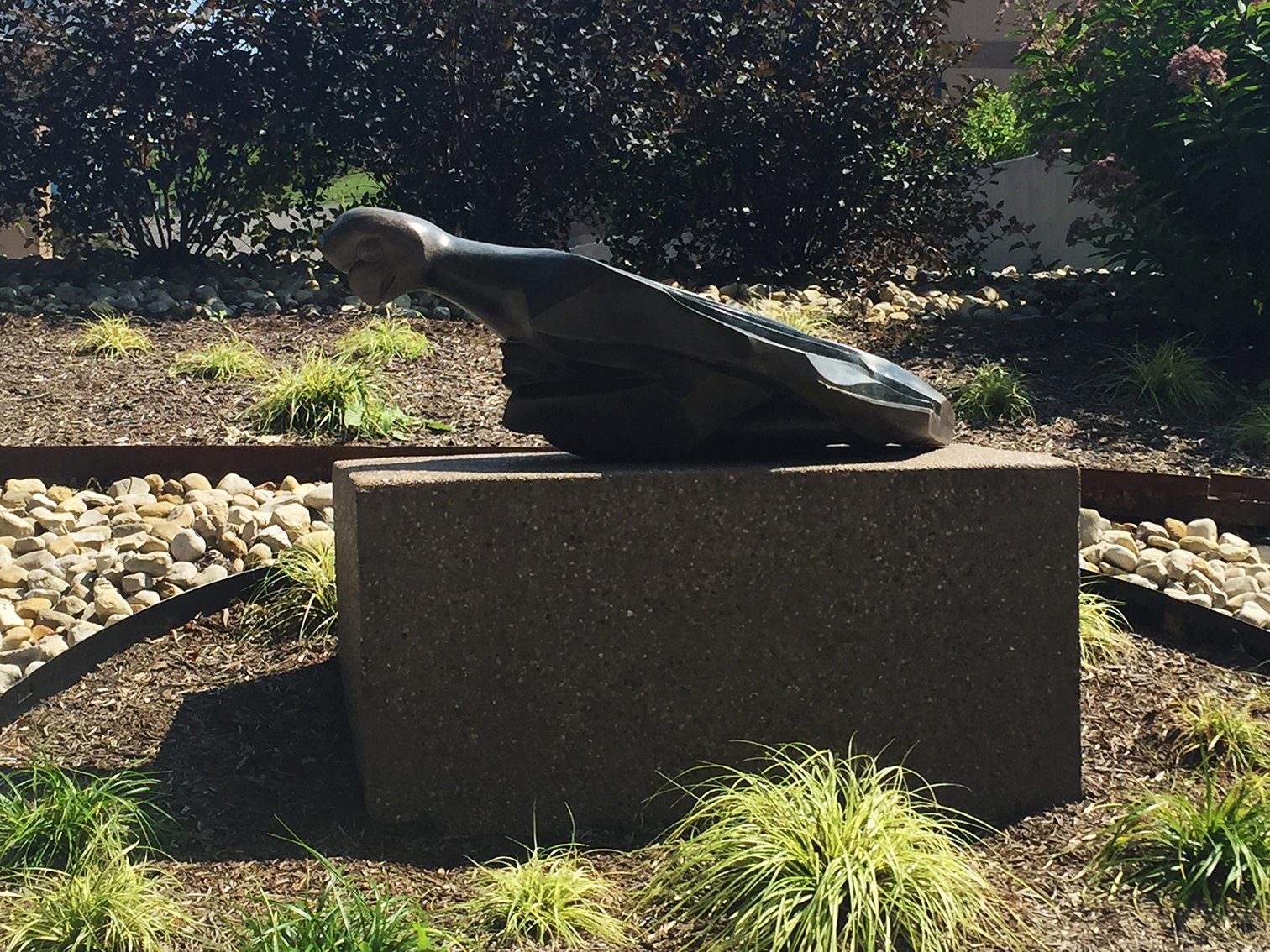 Brighton Sango's "Shy." Like Matemara, Sango was a pioneer of the Shona art movement in Zimbabwe. While his peers created art inspired by African tradition, Sango took a unique abstract approach. 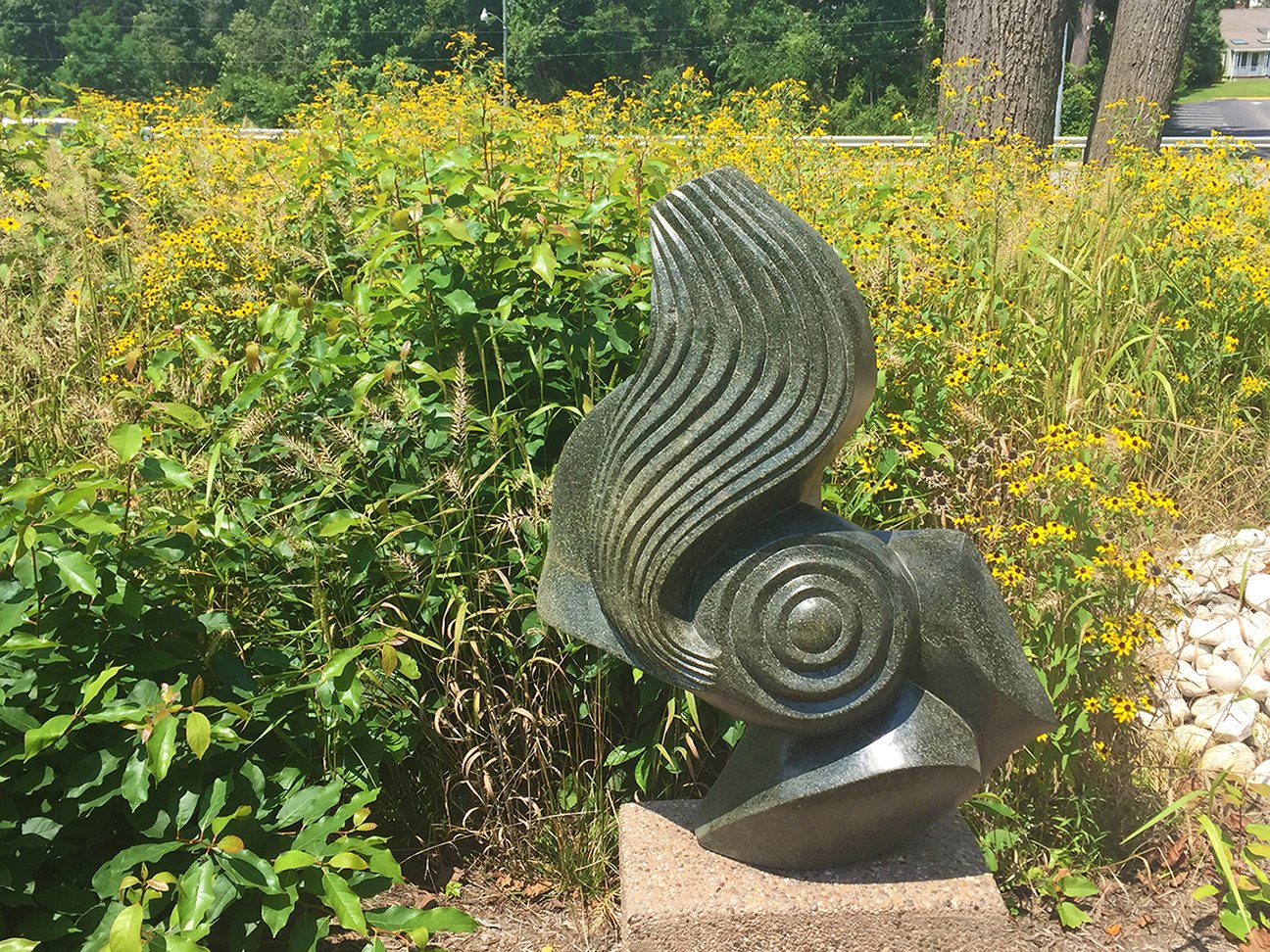 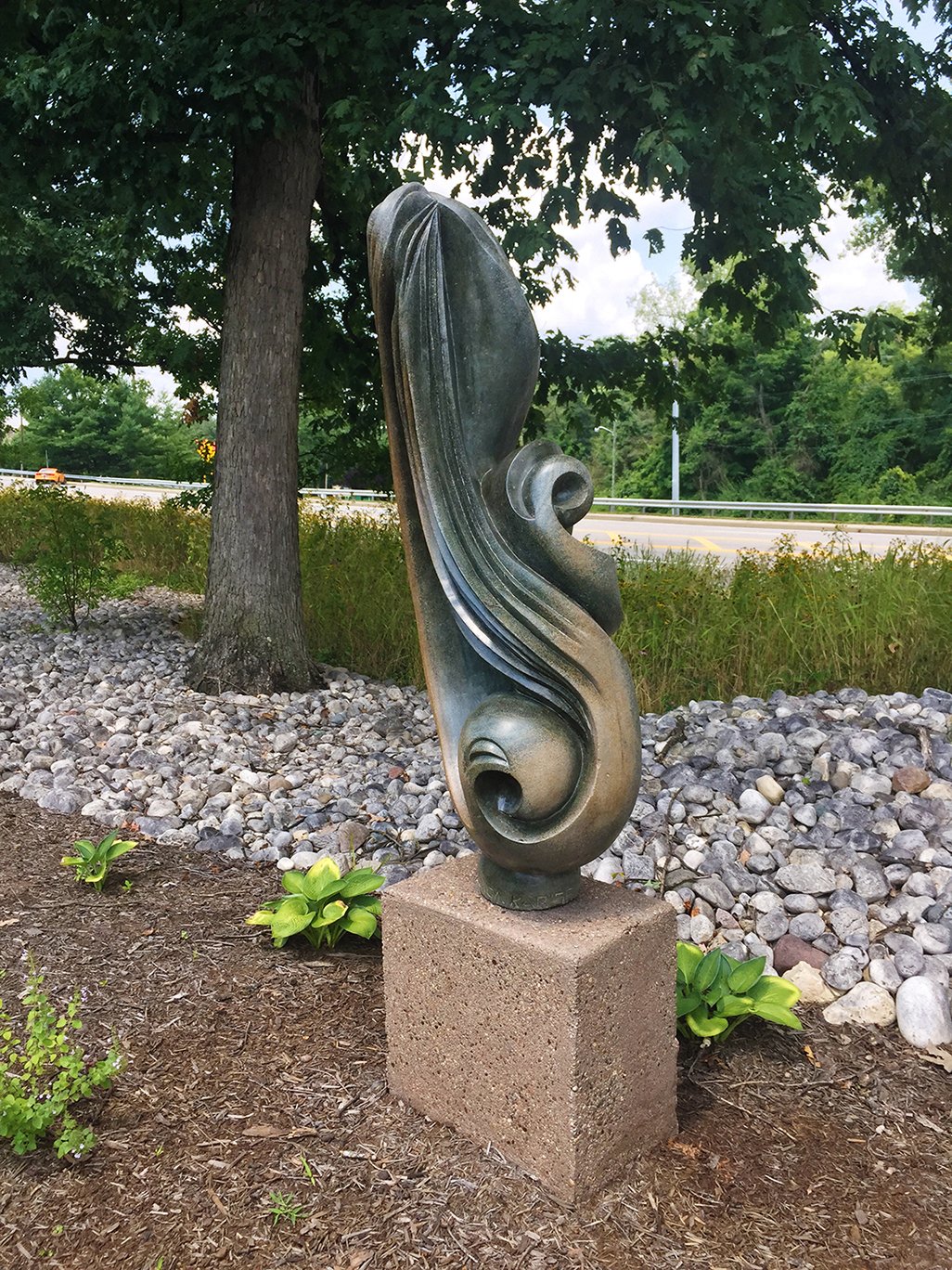 Laxon Karisi's "Human Suffering." The sculpture is made of serpentine, a type of rock with a naturally rough, greenish appearance, similar to a snake. 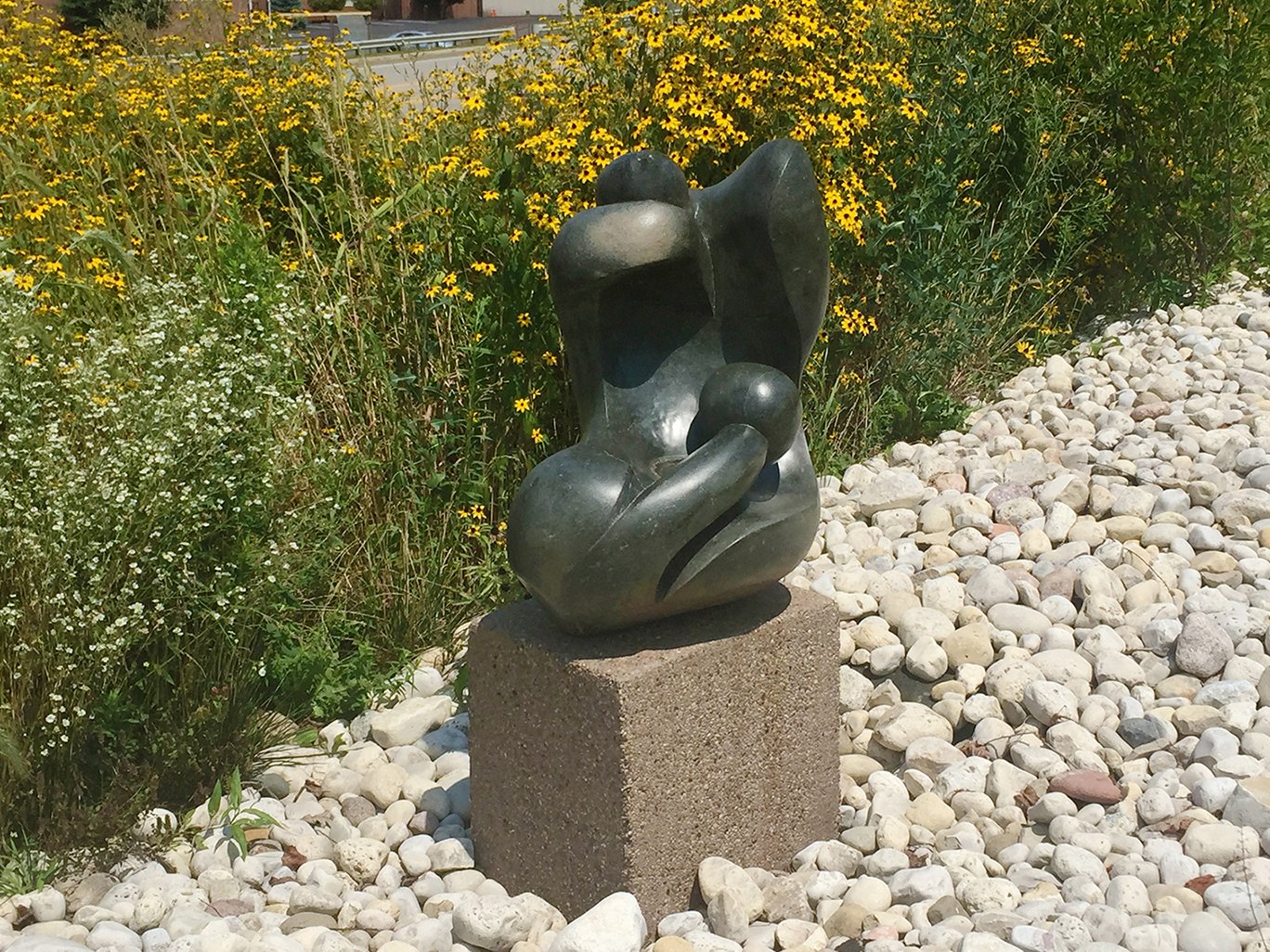 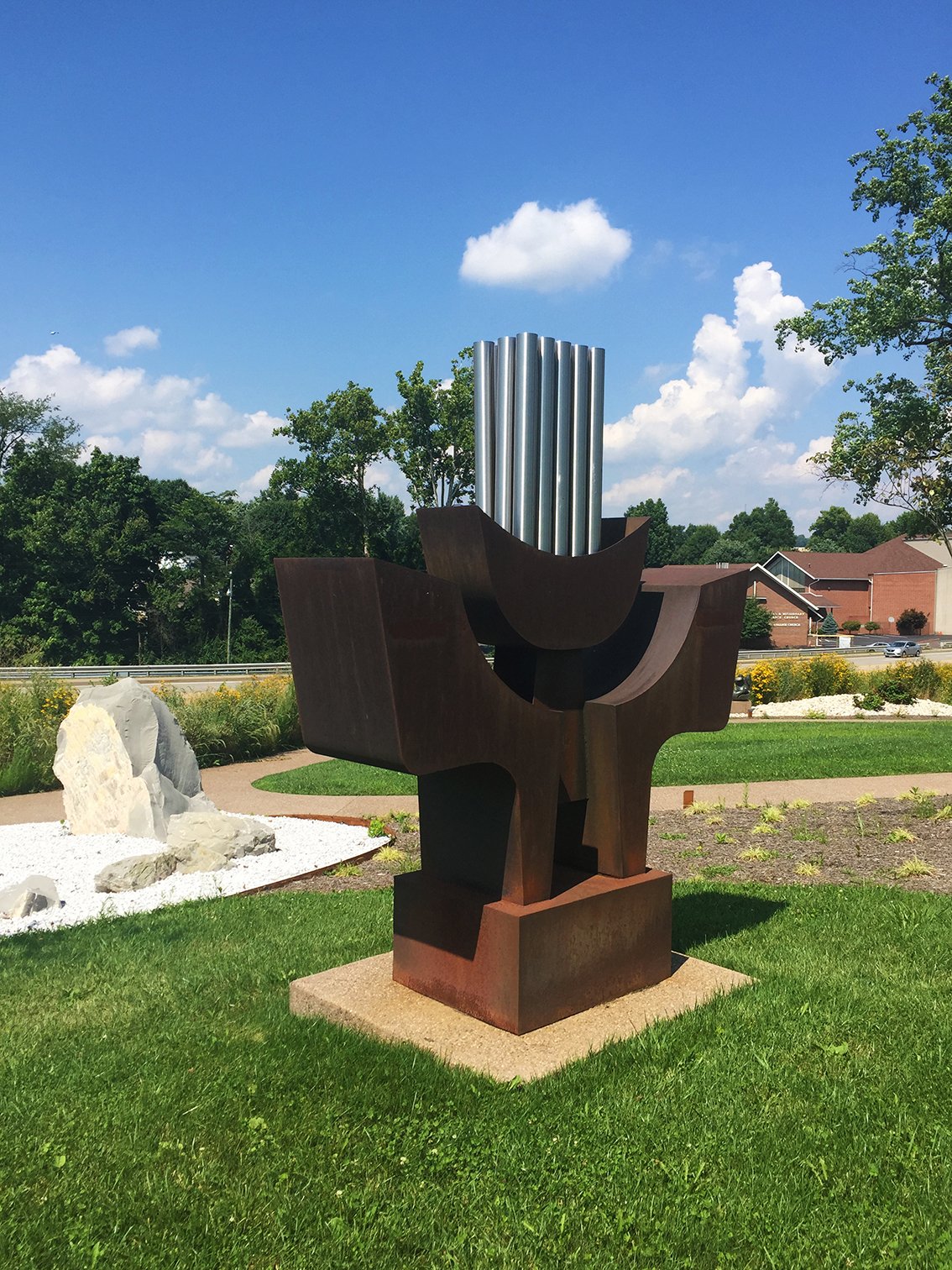 Wayne Trapp's "The Spirit of Growth." Trapp specializes in large outdoor sculpture. Also an oil painter, Trapp, according to his website, "can no more give [sculpting] up than he can give up breathing." 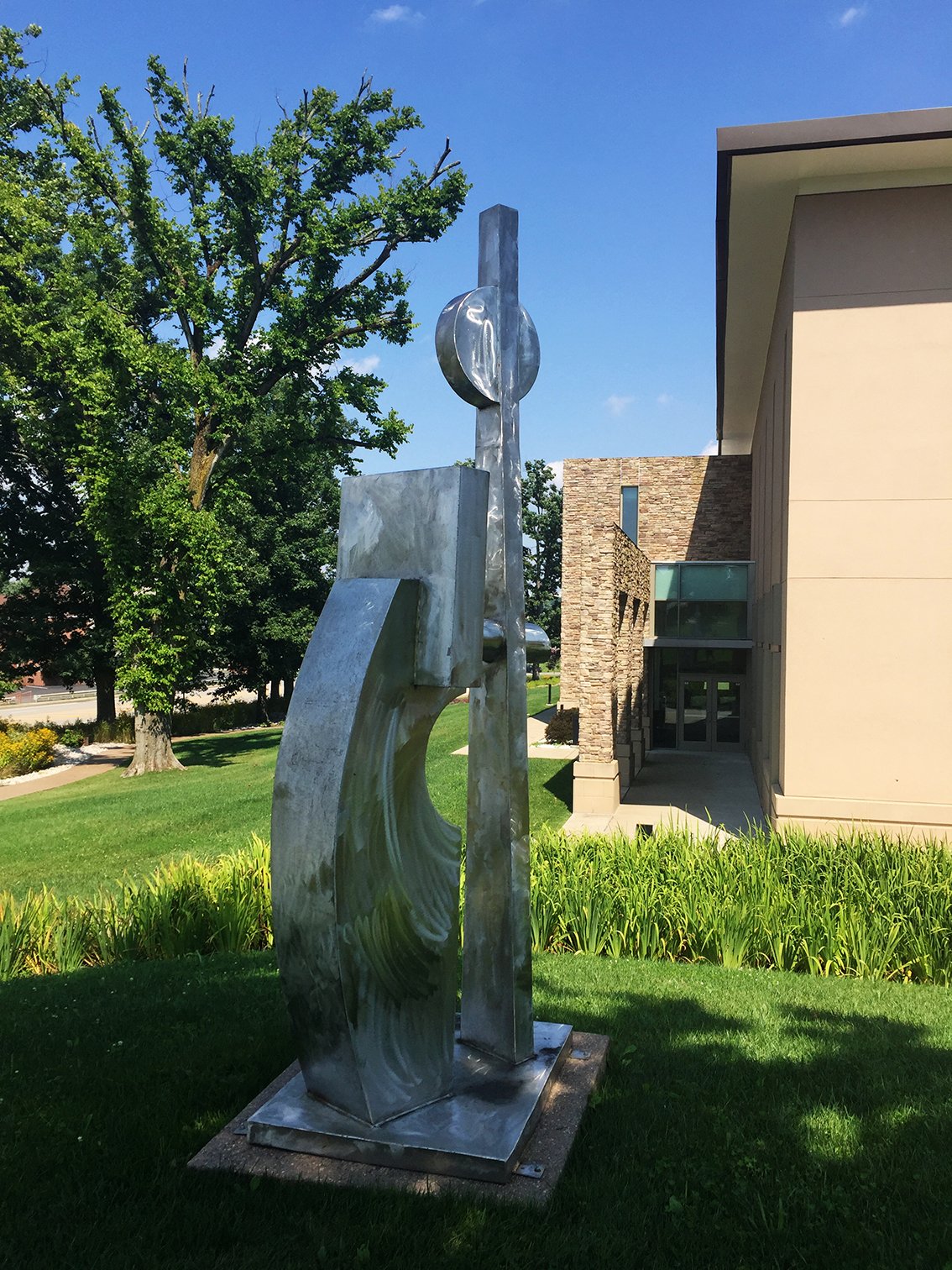 The Art Museum of WVU hosts exhibits from its own collection as well as traveling exhibitions. The grounds and gardens are often used in classes and events. 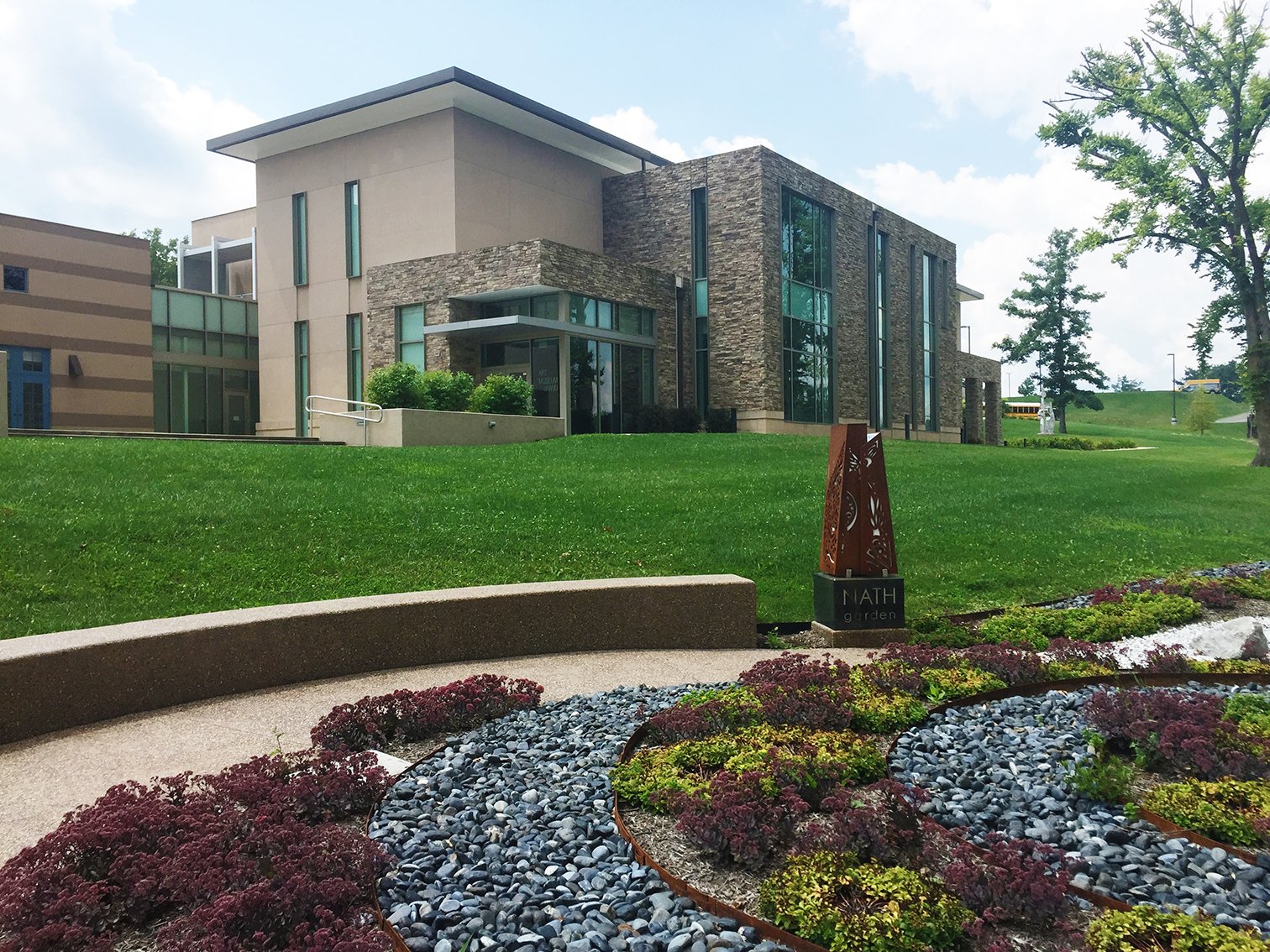 The Nath Sculpture Garden was fully funded and directed by Dr. Joginder Nath. While his love of the arts made the sculpture garden a reality, it was Nath’s scientific achievements that brought him to Morgantown. Born and raised in India, Nath received his bachelor’s and master’s degrees from Panjab University and his doctorate in genetics from the University of Wisconsin-Madison. Nath was one of three professors hired by WVU in the 1960s to start a genetics and developmental biology program. He spent more than 40 years at WVU, winning national awards for his research and teaching and investing in his student and the university community. His philanthropy supported lecture series, the Student Food Pantry, and restoration of the Metropolitan Theatre, efforts that led to his induction in the highly regarded Order of Vandalia. Nath’s wife, Charlotte, is a retired family medicine specialist in the WVU School of Medicine. Former WVU landscape architecture professor Ashley Kyber described the Naths as “lights of the community.”

Shortly before his retirement in 2009, Nath supported the development of the Art Museum of WVU by donating funds to create a sculpture garden and courtyard in the front lawn. The Naths frequently attended exhibits and performances at the Creative Arts Center and enjoyed visiting museums while traveling. The new art museum, located in the former Erickson Alumni Center building designed by architect Michael Graves, would be a premier center for the arts in West Virginia. Designing a sculpture garden would expand the museum’s ability to share works of art with the public and make use of the greenspace between the museum and the well-traversed Patteson Drive.

The Nath Sculpture Garden opened in 2016, providing the WVU community with a unique outdoor space to enjoy. WVU students and professors in design, landscape architecture, and related programs were instrumental in developing the sculpture garden. In an interview with WVU Today, Nath described his passion for this project, “The sculpture garden emphasizes nature and art in a space people will find appealing and attractive—a place they will want to spend time. It extends the museum setting to the outdoors for art to be appreciated and enjoyed by many and for students and faculty to learn and grow.”

The design of the Nath Sculpture Garden was inspired by Nath’s role in the community and his personality. The garden features a path, an open field, and various symbolic elements, such as the pyramidal lanterns. The lanterns symbolize Nath’s relationship with his wife. A lover of visual stories of pace, Nath hand selected each rock incorporated into the project, one of them he called “The Fishtail,” which is located by the lantern dedicated to his life.

Joginder Nath passed away in December 2016, his sculpture garden a timeless legacy of his dedication to the WVU community.