This Iowa City landmark was built by industrialist Chalmer D. Close in 1874. A fine example of Italianate architecture, the Close House was once the center of a small but prosperous industrial hub that Close and his brother, Manley, developed during and after the Civil War. Close operated a number of businesses including a linseed oil company and a glove factory, both of which were located nearby. In terms of design, the mansion is a fine example of Italianate architecture. It is three stories tall and features arched windows with decorative molded sandstone caps, a three-sided projecting pavilion topped with a balcony, a main entrance portico, an elaborate cornice, and a cupola with small glass windows. The house is now home to a non-profit arts organization called Public Space One. It was added to the National Register of Historic Places in 1974.

Chalmer D. Close built this elegant Italianate mansion in 1874. Close was a successful industrial in the decades following the Civil War. 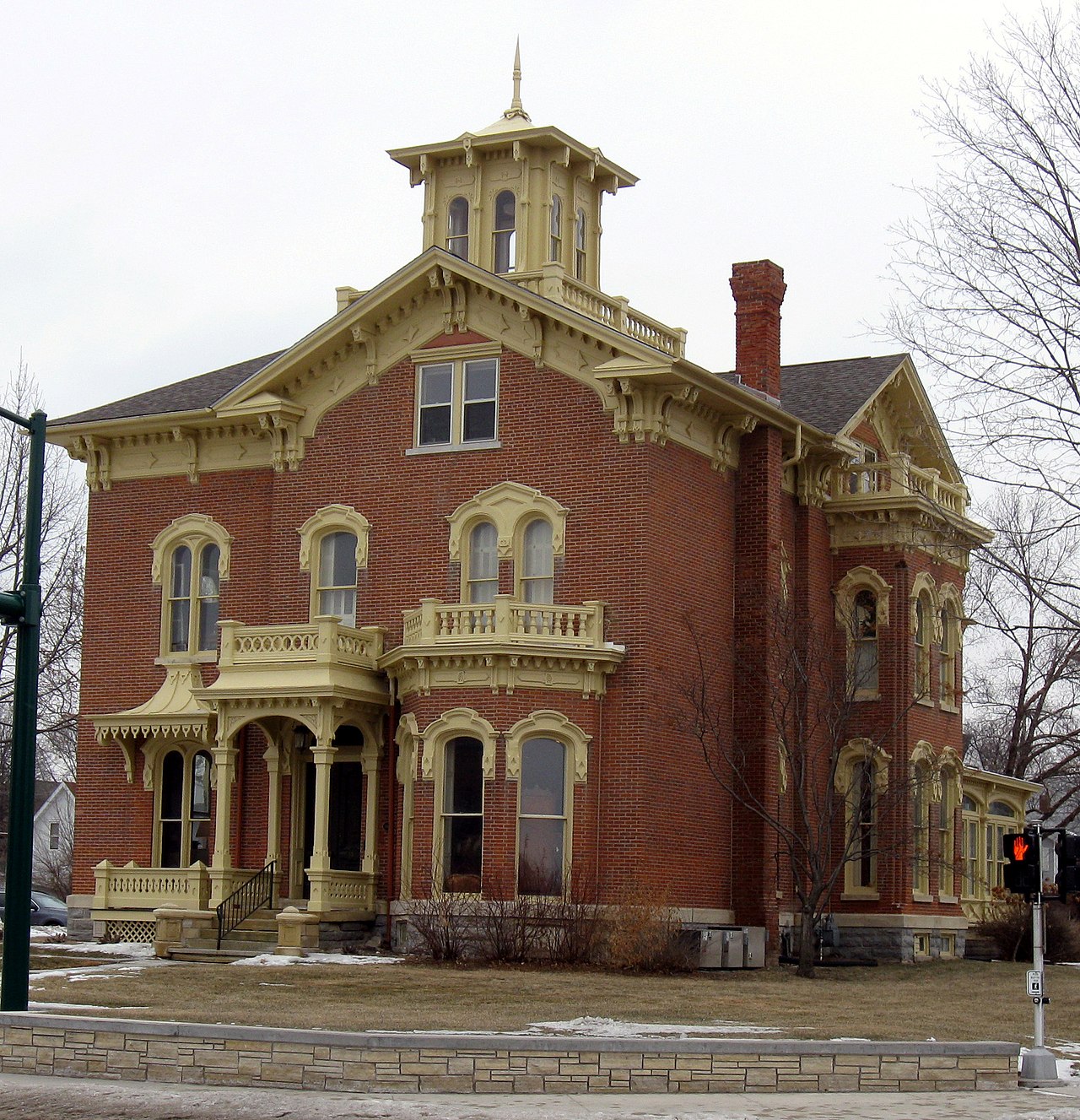 Chalmer D. Close was born in 1832 in Genoa, New York arrived in Iowa City in 1854 to join Manley who had already been living here for several months. They opened a candle, soap and lard factory on Gilbert Street that became profitable. At the outbreak of the Civil War, the supply of cotton seeds decreased, which prompted Iowa farmers to grow flax seeds instead. A number of products are made from flax seeds including linseed oil and flax straw, which is used to make linen and high-quality paper. The Close brothers recognized this shift in the market and opened the linseed oil mill, called the M.T. Close & Company, in 1861.

A few years later, Manley established a paper mill in the town of Coralville using the flax straw produced at the oil mill. At its peak the mill produced six tons of paper every day. Tragically, an explosion in 1875 killed six workers and the mill was never rebuilt. The linseed oil mill was acquired by the National Linseed Oil Company in the late 1880s. Close continued to oversee operations of the mill until he died of pneumonia in 1890. The mill eventually closed in 1898.

Close built the house kitty corner from the linseed oil mill. It cost $15,000 to build, which in today's dollars would be $360,000. In addition to its elegant Italianate design, the house boasted steam heat (the steam was supplied to the house via pipes connected to the mill), eight fireplaces, a library, a billiards and chess room, and a walnut staircase. In all, the house had 14 rooms and three bathrooms.

Close was married and had three daughters and one son. After he died, his wife Helen donated $10,000 to help build a YMCA/YWCA building on the University of Iowa campus. It was named Close Hall in his honor. One of the Close' daughters, Emma, got married in the house in 1892 to the son of another prominent local family. Helen lived in the house until she died in 1920. Three years later the family sold it to a fraternity but the Close' reacquired it again in 1930 when the fraternity got into financial trouble. The family sold it to the county in 1941 and it became the Johnson County Department of Social Services.

Over the following few decades, the house was significantly altered. The cupola, widow's walk, balcony, and main entrance columns were removed. Fortunately, the owners who bought the house in 1981 it began to restore it. They ran their interior design studio and furniture showroom in the house until 2019 when they moved to a new location.