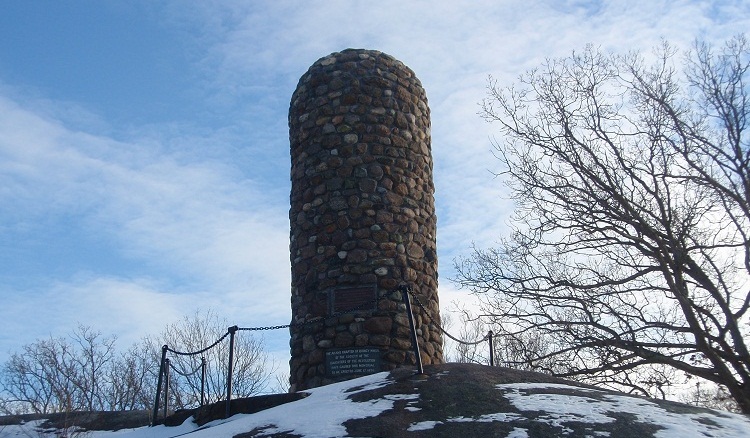 Here Abigail Adams and seven-year-old John Quincy Adams watched the burning of Charlestown during the Battle of Bunker Hill, June 17, 1775. At the time, Abigail wrote; “the decisive Day is come on which the fate of America depends”. Though the battle took place 13 miles away, Abigail stated that “the constant roar of the cannon is so distressing we cannot Eat, Drink or Sleep.” At age 78, John Quincy retained a vivid memory: “I saw with my own eyes those fires, and heard Britannia’s thunders in the Battle of Bunker’s Hill, and witnessed the tears of my mother and mingled with them my own, at the fall of Warren a dear friend of my father, and a beloved Physician to me.” 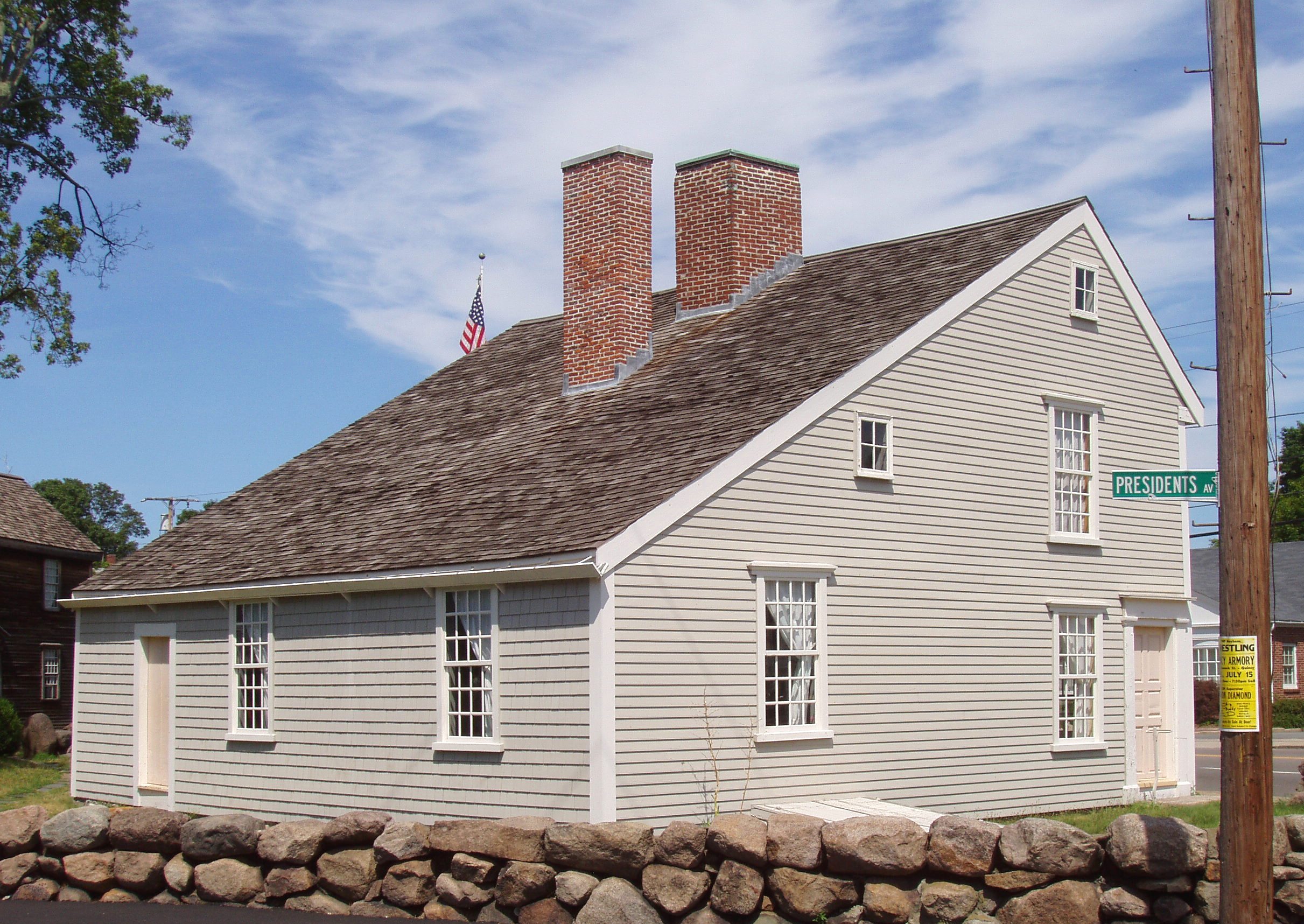 The sixth President of the United States, John Quincy Adams, was born here to John and Abigail Adams in 1767. The Adams family lived here until 1783, a time in which John Adams helped shape the Declaration of Independence and was a leading voice in discussions about the shape of the national government. John Quincy Adams was a one-term President in the late 1820s and is best known for his nationalist foreign policy as a diplomat in his early years and his leadership of the small but vocal anti-slavery contingent in the House of Representatives between 1830 and his death in 1848. During these years, Adams warned against the disproportionate political power of Southern planters and introduced hundreds of anti-slavery petitions. In response, Southern Congressmen with the help of political leaders of both parties in the North instituted the "gag rule" in 1836. Between 1836 and 1844, John Quincy Adams led the fight against the gag rule and the methods of its proslavery supporters by attempting to introduce antislavery petitions in clever ways that embarrassed his colleagues until a majority in the house sided with Adams and his repeal of the gag rule in 1844. The home is part of the Adams National Historical Park which preserves the home of two Presidents of the United States, John Adams and John Quincy Adams, of U.S. Ambassador to Great Britain, Charles Francis Adams, and of the writers and historians Henry Adams and Brooks Adams. The park's main historic features include the birthplaces of the two American Presidents, and the Stone Library which serves as the first presidential library and houses the books of the President John Quincy Adams. 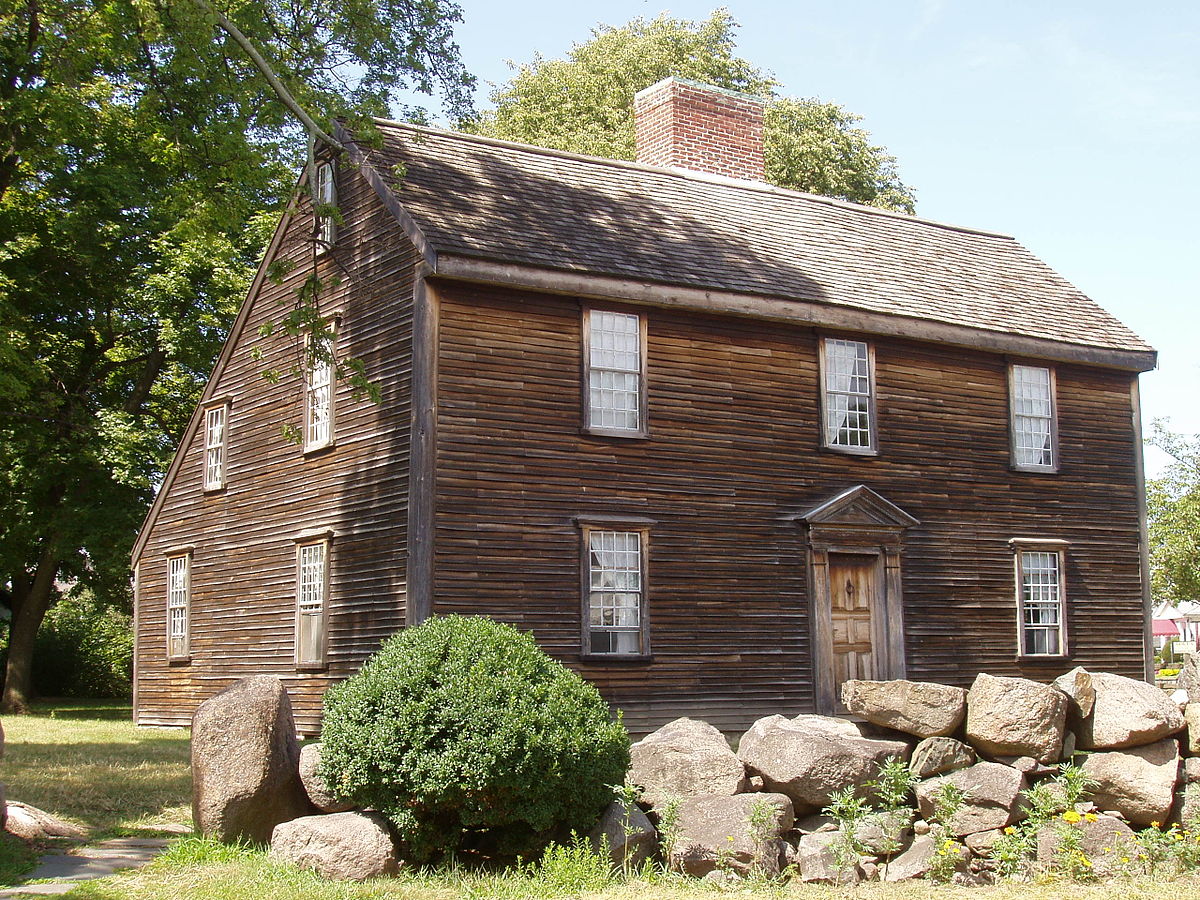 John Adams was born in 1735 in the house at the rear of the lot. John Quincy Adams was born in 1767 in the house at today's street corner. Here, Abigail Adams managed house and farm for several years during the Revolution. Here, John Adams drafted the Massachusetts State Constitution, which served as a model for the U.S. Constitution. On managing house and farm, Abigail wrote: "If what I enjoy I can share with my partner and with Liberty, I can sing o be joyfull and sit down content." While embroiled in the politics of creating a nation John Adams wrote: "I should have thought myself, the happiest Man in the World, if I could have retired to my little hut and forty Acres, and lived on Potatoes and Seaweed." The birthplaces of the Adams Presidents are now a part of the Adams National Historical Park in Quincy, Massachusetts. . These two structures are the earliest surviving presidential birthplaces in the country. 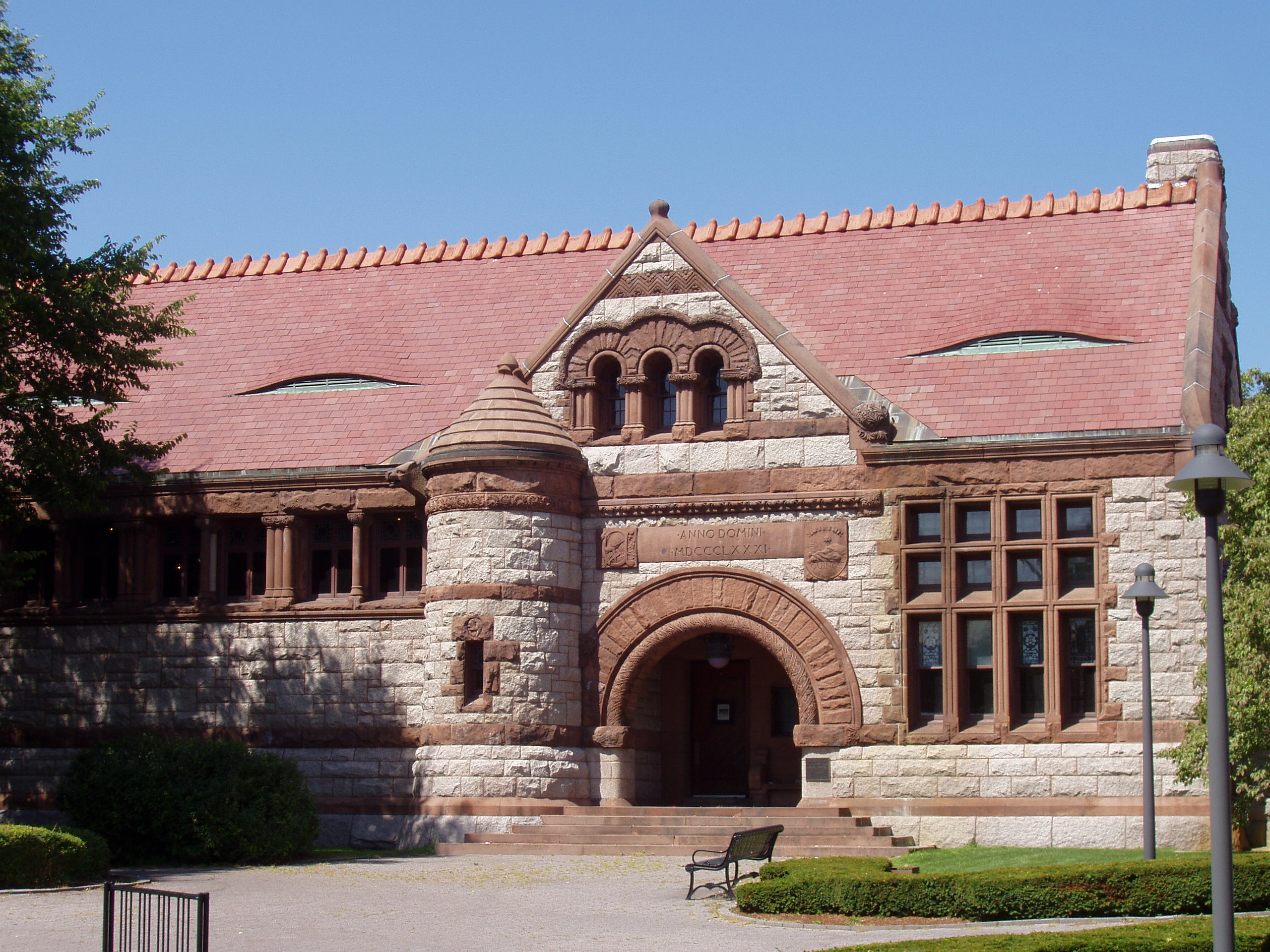 The Thomas Crane Public Library was built in 1882. This historic library was established by the Crane family in memory of patriarch Thomas Crane, a wealthy New York dealer in Quincy Granite. The library is notable both for its collection and its architecture. 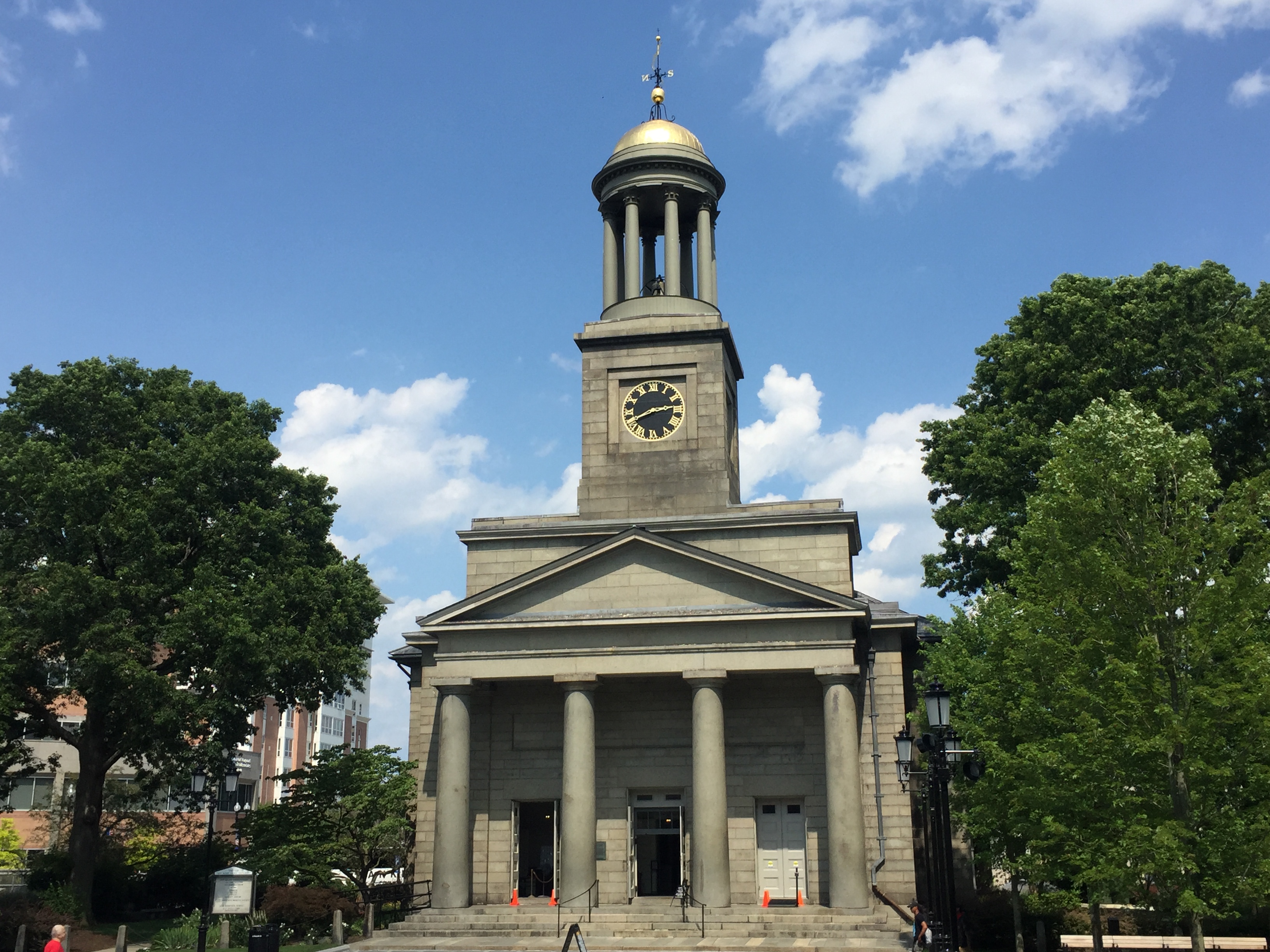 Church of the Presidents

Built in 1828, this church is the fourth edifice to house the town's earliest congregation and is the resting place of two U.S. Presidents and First Ladies. The building was endowed by John Adams, who specified it be a "Temple of stone" built of Quincy granite. In 1826, John Quincy Adams proposed that the church become the permanent resting place of his parents: "a plain and modest monument" that "may yet be as durable as the walls of the Temple, and as the Rocks of his Native Town." In 1852 the church also became the resting place of John Quincy and Louisa Catherine Adams. 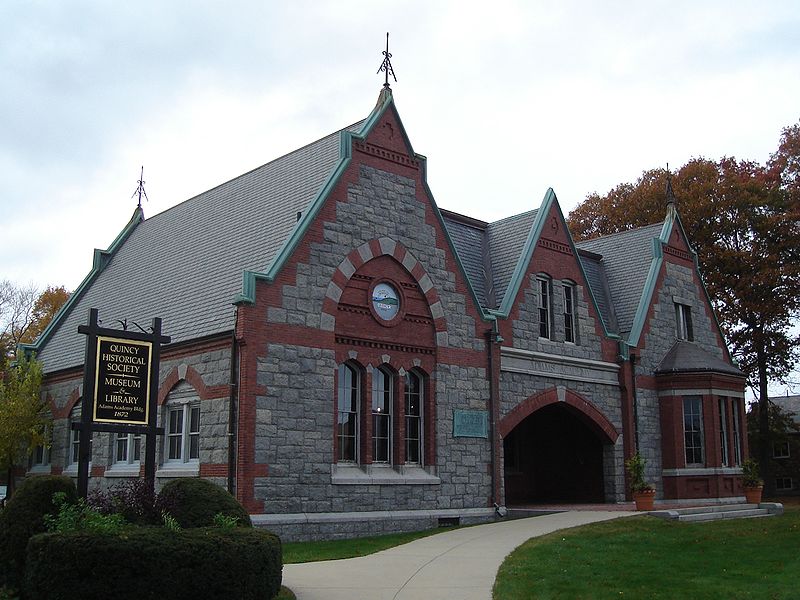 Adams Academy was a school that opened in 1872. It was built as a preparatory school and was funded with a bequest of former President John Adams. Due to lack on enrollment, Adams Academy was closed in 1908 and today serves as the headquarters of the Quincy Historical Society. 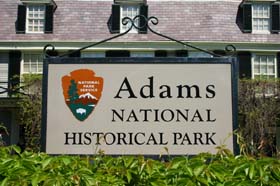 John and Abigail Adams acquired this house upon their return from England in 1788. It became the home to four generations of the Adams family, including two Presidents and their wives. It remained in the family for two more generations, used a summer home until 1926. It was maintained as a museum by the family until it was donated to the National Park Service in 1946. In a letter to a friend John Adams wrote: "I think to christen my Place by the Name Peace field, in commemoration of the Peace which I assisted in making in 1783, of the thirteen Years Peace and Neutrality which I have contributed to preserve, and of the constant Peace and Tranquility which I have enjoyed in this Residence."