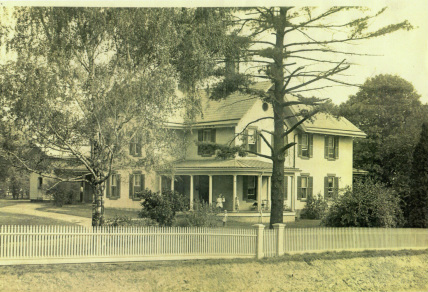 Current photograph of the McGrew House 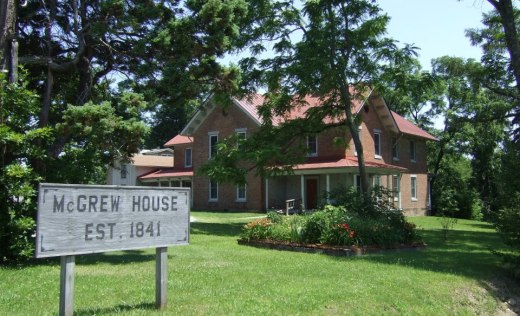 For more information about James Clark McGrew, consider this book by Susan Hardesty. 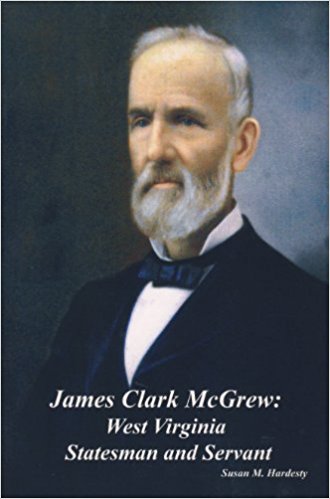 McGrew's bank in which he worked as "Head Cashier" and later president. 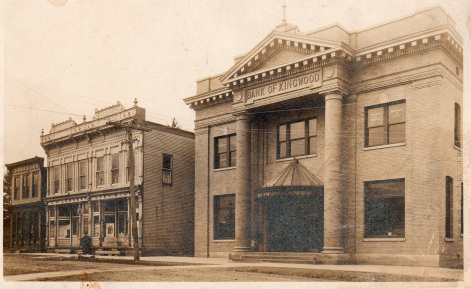 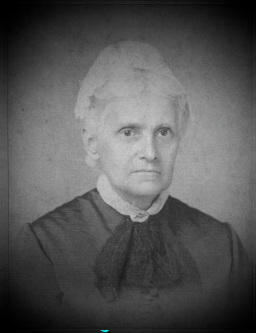 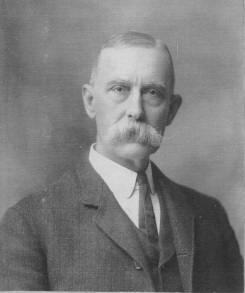 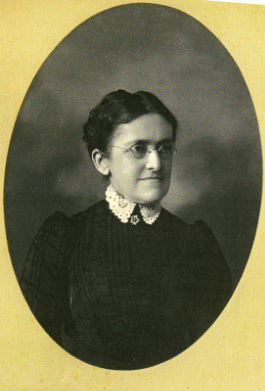 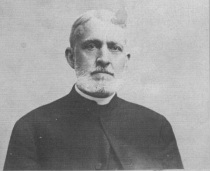 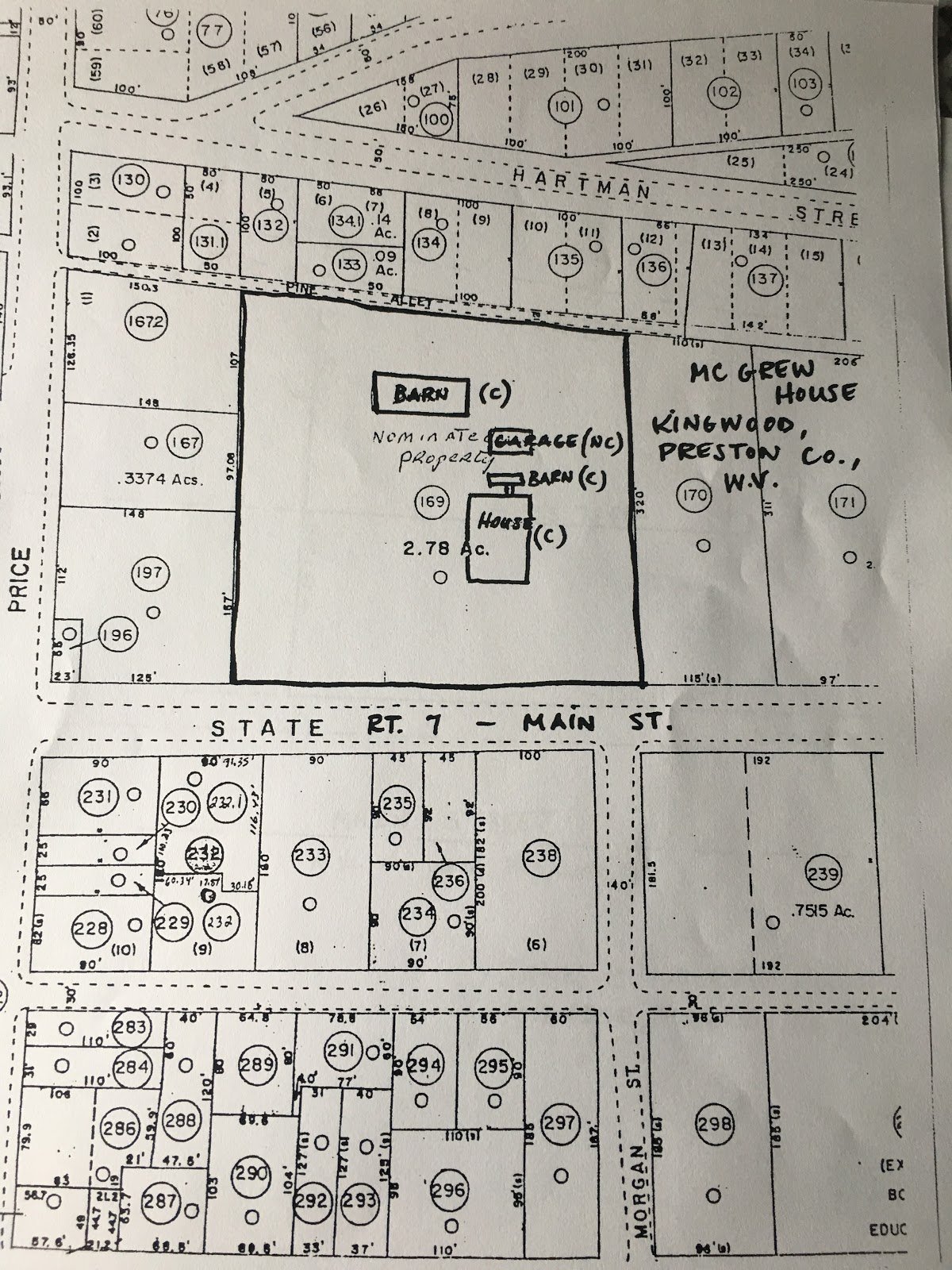 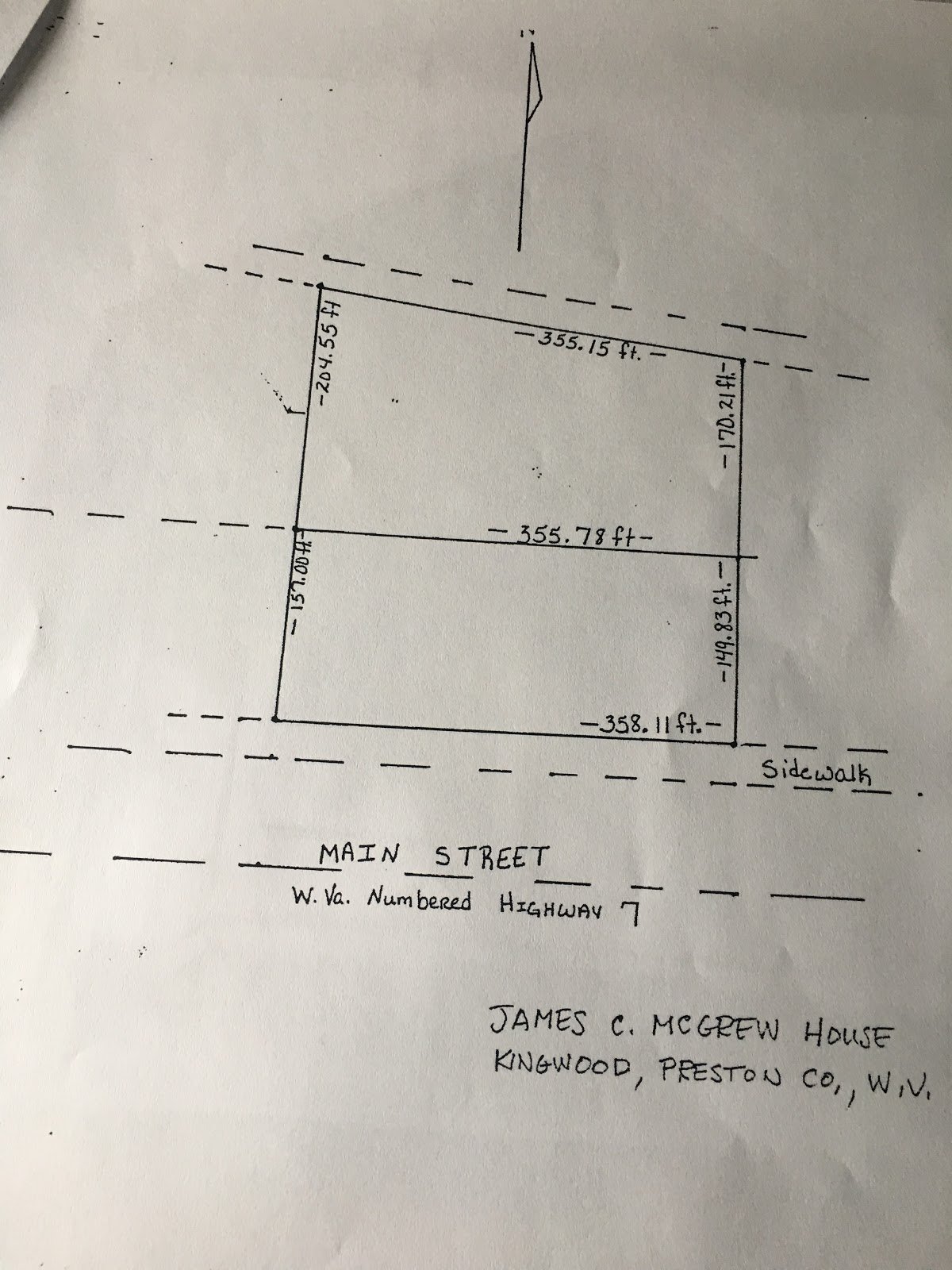 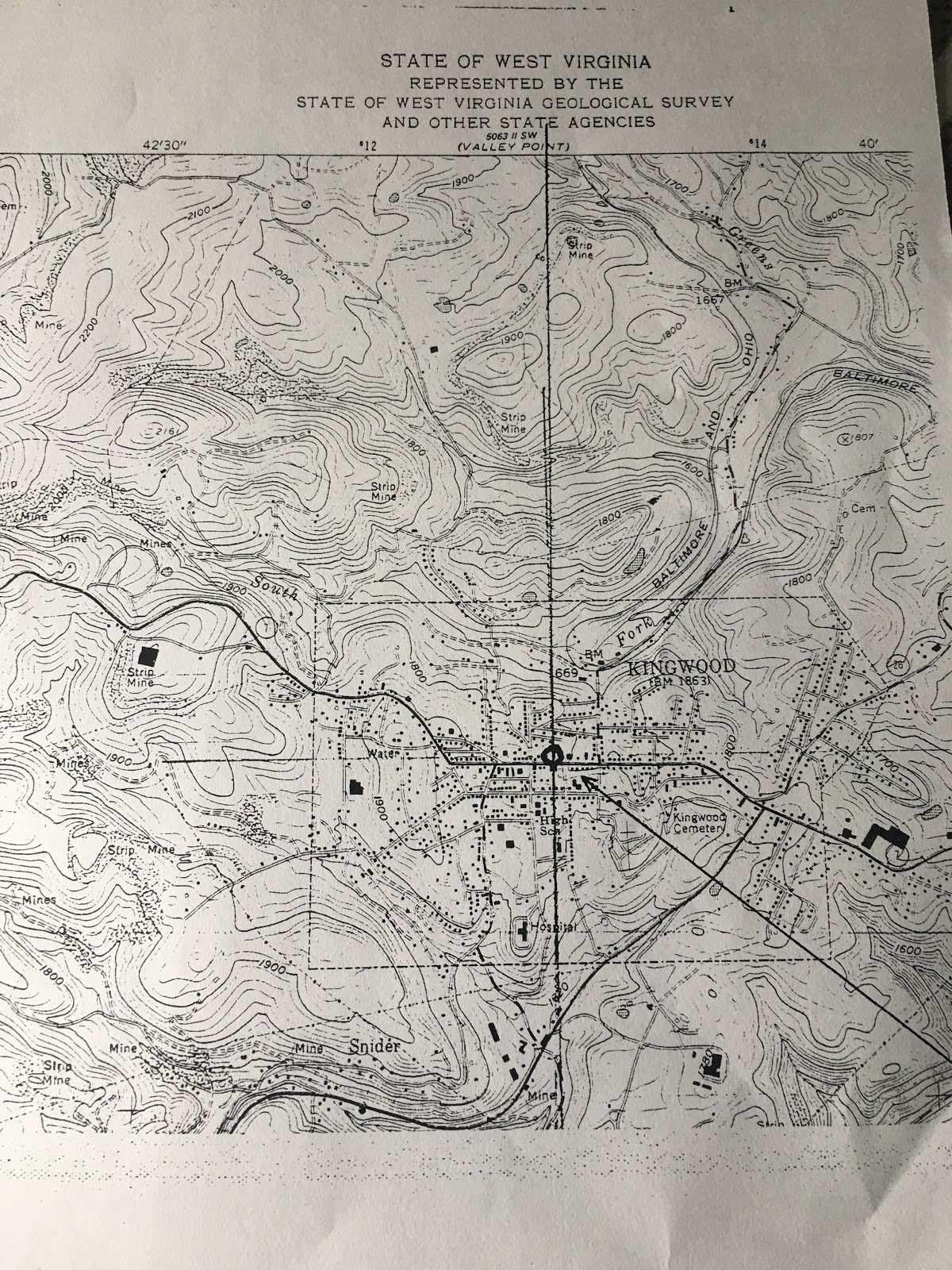 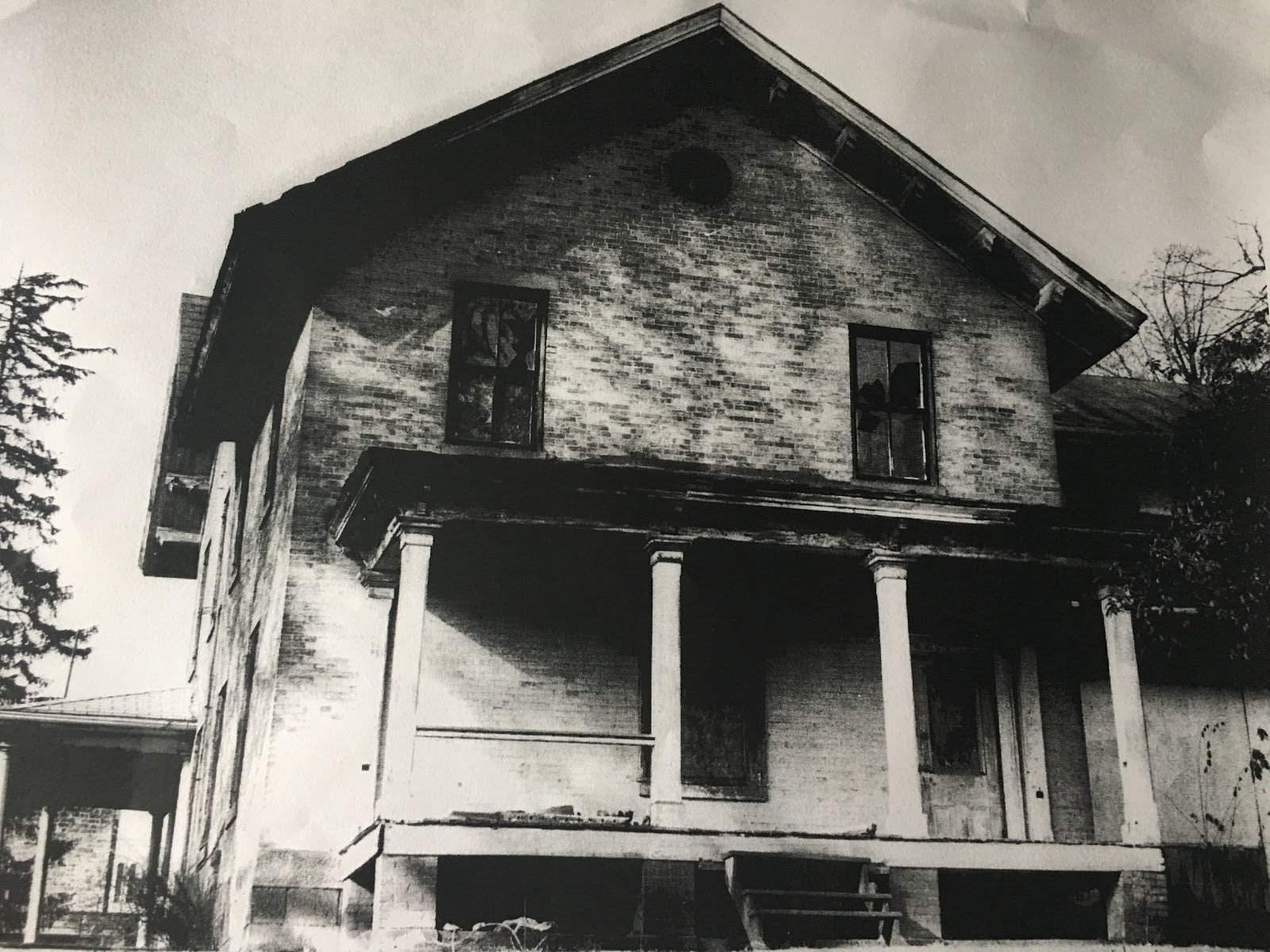 Constructed over a period from the 1840s to 1870s for the family of James C. McGrew, this historic home (known to the family as "The Pines") now serves as an educational center dedicated to teaching about the history of the antebellum period and West Virginia statehood. The Society for the Preservation of the McGrew House started in 1989 with the mission to preserve the house and make the home an educational and cultural center, emphasizing the pre-Civil War period in northwestern Virginia and the creation of the State of West Virginia. The organization offers a number of exhibits that include antique furnishings, clothing, and artifacts related to the life of James McGrew. The organization also works to share the culture of the region and promote the history of economic development within Preston County. The society also operates a gift shop at the house, which is open on Fridays and Saturdays from May to October (the house itself is open during special events, on specific Sundays in the summer, and upon advanced request).

The first occupant of the McGrew House, James C. McGrew, played a prominent role in the development of Preston County and in the formation of the State of West Virginia, particularly as a representative of the county at the Virginia Secession Convention of 1861. McGrew was born September 14, 1813 and married his wife Persis Hagans in 1841. He built the first iteration of their house in Kingwood shortly thereafter, which consisted of the two-story ell portion of the current structure built in the Federal style with symmetrical features, smooth facade, and gabled roof. From then until the outbreak of the Civil War McGrew was active in establishing multiple business interests in Preston County, which his father James had helped to found with John Fairfax. The latter McGrew, James C., was an early promoter of the town of Kingwood (incorporated on March 12, 1853), earning the contract to build its first courthouse in 1857 that many considered among the finest in the state. James C. McGrew also operated a store in nearby Reedsville with his business partner E.C. Bunker and served as the area's first postmaster in a new post office at Salt Lick Falls.

Residents of Preston County elected McGrew and William G. Brown Sr. to represent them at the Secession Convention in Richmond on the eve of the American Civil War. At the convention, McGrew voted against secession and was one of the eighteen members of the gathering who held a secret meeting on the afternoon of April 20th, 1861 to discuss secession from Virginia rather than the Union. It was the germ idea that developed into the reorganization of the government of western Virginia into the state of West Virginia in 1863. According to local legend, the McGrew House itself also played a role in notable events during the era: Persis McGrew evidently barred invading Confederate soldiers from her home during her husband's absence with the pro-Union government in Wheeling.

Considered a West Virginia founder, McGrew served as a member of the first state legislature, a responsibility that kept him away from home until 1870. That year, he added what is now the main block of the McGrew House, a two-story Italianate brick structure with broader roof planes, more centralized chimneys, and larger windows than the original section of the home. It was also during this time, however, that the residents of the Second Congressional District elected McGrew to serve in the 41st (1869-1871) and 42nd (1871-73) Congresses, a position that once more drew him away from home. After declining a third nomination McGrew returned to his home in Kingwood, but waited only a few short years before returning to politics. In 1879 he served as the mayor of Kingwood, then resigned to become a delegate to the Methodist Ecumenical Conference in London. When he returned he ran for mayor once more and won.

James C. McGrew's son, William C. McGrew, meanwhile, was also prominent in state politics. He moved to Morgantown after spending his childhood in the house, and went on to become that town's mayor for five terms and serve as its representative in the state senate in 1878. Meanwhile, William's father remained in Kingwood for the remainder of his life, passing away in 1910 four days after his 97th birthday. After his death, the McGrew House and grounds passed through a number of private families hands before serving as the local senior center in the 1970s. The Preston County Commission purchased the property a decade later, but evidently did not realize the site's historical significance until 1989. That year, the Kingwood Tourism Committee began conducting research on what locals knew at the time as the "Gibson property." Shortly thereafter, local volunteers organized the Society for the Preservation of the McGrew House and nominated their namesake site for status on the National Register of Historic Places. The society continues the operation of the site to this day as a museum and gift shop devoted to the study of James McGrew and the local area. The gift shop is open Fridays and Saturdays from May to October, while the house itself is open on the third Sunday of summer months, upon advanced request, and for special events.

The gift shop is open from May to October on Fridays from 12 PM to 2 PM and 4 PM to 6 PM and Saturdays from 10 AM to 12 PM. The house itself is open on the third Sunday of every month over the summer, during special events, and upon advanced request.