The Victory Monument was added to the National Register of Historic Places on April 30, 1986. 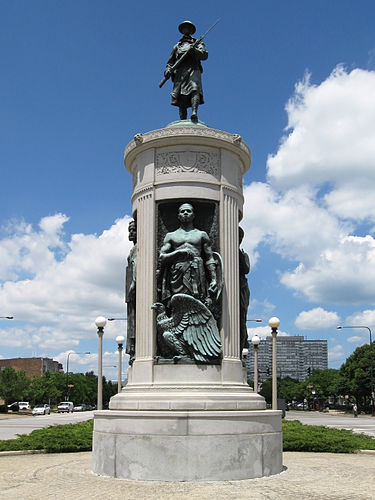 Those interested in learning more about the black experience in World War I should read this book-Harlem's Rattlers and the Great War: 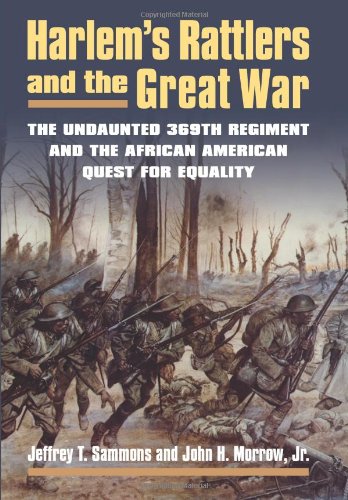 The 8th Regiment of the National Guard became the first unit commanded by African Americans, and it was assigned into federal duty during World War I on August 3, 1917, under the command of Franklin A. Denison, On December, 1, 1917, while participating in the war campaign, the unit was reorganized and redesignated as the 370th Infantry and assigned to the 185th Infantry Brigade, which was assigned to the 93rd Division (Provisional) on 5 Jan, 1918.1  The monument not only recognizes that accomplishment, but serves as a physical reminder of the increasingly influential African American populace of Chicago's south side during the post-WWI era.

The "Fighting Eighth" received acclaim for being the regiment that finally pushed German forces from France's Aisne-Marne region prior to the 1918 Armistice.  As a result, the 370th Infantry Regiment (renamed during WWI) was awarded 71 War Crosses with special citations for valor and merit and 21 Distinguished Service Crosses. The regiment's commander, General Jones, was awarded the French Croix de Guerre for valor in battle.2

The African American community that turned Chicago's south side Bronzeville neighborhood into a "Black Metropolis," a thriving African-American community. As such, it was that community that began petitioning for the erection of a proper memorial denoting the valor of the "Fighting Eighth." However, by the mid 1920s, strong resistance to a proposed monument prevented its erection; the South Park Commission maintained that there was no space available for the monument. As was often the case, the famous, influential African-American newspaper, the Chicago Defender began actively promoting a "vote no" campaign against the commission board, urging blacks to defeat any project backed by the South Park Commission until the 8th regiment was recognized -- and it worked. The finished piece was dedicated on Armistice Day, November 11, 1927 in an elaborate public ceremony. In 1936, a black doughboy was added to the  top of the monument.3

It can also be argued that the monument speaks more to increasing influence of black Americans in Chicago during the early 20th century than it does the 8th  Regiment. The Great Migration into Chicago gained tremendous momentum during World War I as European immigration nearly ceased and jobs opened up in cities such as Chicago. The push of Southern racism and segregation (and a belief it was better in the North) further helped push Southern black Americans to Chicago with hopes of finding work and a better life.4

Tens of thousands of black Southern Americans migrated to Chicago and began to form neighborhoods -- some very large -- that were almost exclusively black, including where the monument is located. An entire culture of jazz and blues clubs formed, restaurants with southern cooking emerged, and the aforementioned Chicago Defender newspaper grew increasingly influential. As such, Chicago's south side was not only a "black neighborhood," but almost 98% black and hugely influential in broader city politics, notably as the overall population began to decline, which some argue is part of the "white flight" where whites fled the city for the burbs as a result of the influx of black Americans. The monument exists in the heart of that region, and notes how Chicago's population, notably African Americans, had begun to dominate the southern portions. 5

The 8th Regiment was the first African American regiment to receive its own armory when the War Department completed its armory building in 1915. The armory is located at 3533 S. Giles St.and is now home to a prep school The armory was vacant for many decades before undergoing a nearly $20 million renovation.