This 1925 structure was and still is home to St. Petersburg's Methodist residents. Today it is known as the First United Methodist Church of St. Petersburg. This church is one of St. Petersburg's ten buildings constructed with a combination of Greek Revival and English Gothic architecture. These ten were constructed between 1887 and 1925. Its architect, James J. Baldwin, is well known to this day throughout much of the South for his courthouses, churches and other buildings he made throughout his lifetime. 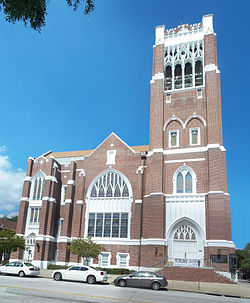 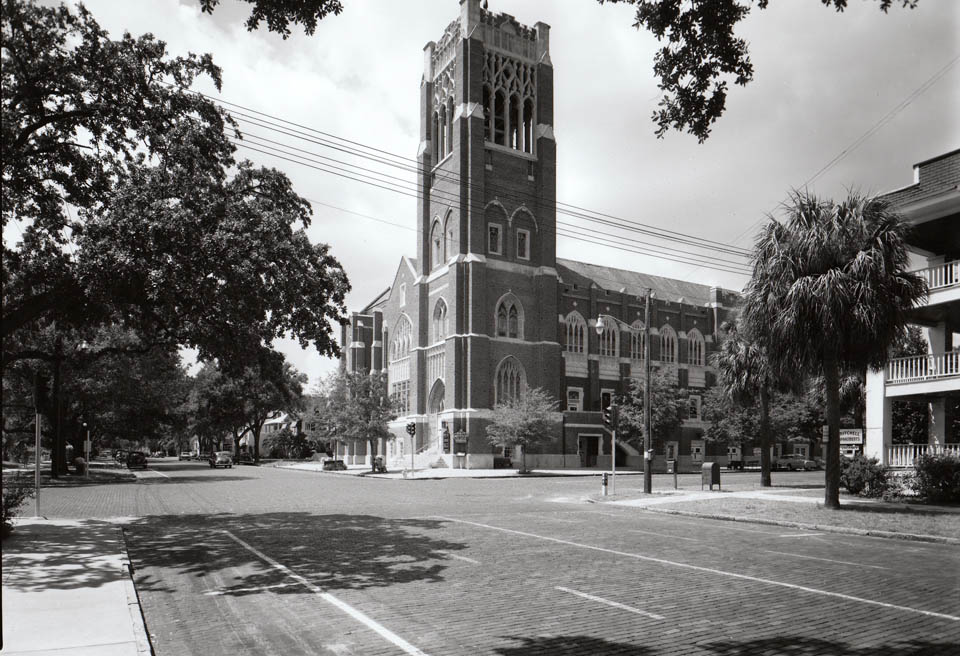 A history of the church provided through its official website:

"Built circa 1925, the First United Methodist Church is significant for its highly artistic, academically correct use of the Gothic Revival with a strong English Gothic influence. According to the City’s Florida Site File records less than ten buildings in St. Petersburg are designed in the style and seven of these are churches dating from 1887 to 1925. The building is actually the fourth sanctuary to house the congregation and the third one to be erected on the site. Numbers two and three were constructed in 1902 and 1905 respectively, demolition being necessary to accommodate the expanding congregation.

Designed by James Baldwin, the Church is constructed of red brick which is laid in common bond. Cast concrete ornamentation is present on all facades. The roof is a steeply pitched pseudo-mansard style roof with the slopes sheathed in gray slate shingles. The main facade of the Church faces south onto Williams Park. This facade consists of three bays, the easternmost bay with its 144-ft. tall bell tower dominates the facade. The base of the tower is flanked by stairs which rise to the main entry door. Pointed arched windows separated into numerous lights by bar tracery are present above the door and at two other levels. The slightly recessed, wide central bay is gabled and completely filled by a very large gothic arched stained glass window whose complex cast stone tracery echoes the open gothic tracery of the bell tower's carillon (bell tower with fixed bells struck by hammers). The western bay contains an entrance door flanked by buttresses that mimic the composition of the tower bay and thereby balances the composition of this facade.

The east elevation, the other important facade fronts directly onto 3rd Street North, a busy downtown street. This facade is comprised of two sections; the nave (sanctuary) of the church and a four-story office wing. The sanctuary section of the is boldly articulated by a projecting semi-hexagonal bay. The office wing is crowned by a higher and more elaborate parapet. The asymmetry of the Sunday School wing contrasts with the rhythmic bays of the nave. However, the two are integrated by the strong vertical lines of the buttresses and the heavy string course at the first floor level. The two deeply recessed planes house the mechanical equipment at the north end of this elevation.

All of the windows in the sanctuary are made of leaded stained glass, manufactured in 1926, by the George Hardy Payne Studios of Patterson, New Jersey. These windows are in the Tiffany style, which incorporates multiple layers of opalescent colored glass, often faceted, with the traditional painted and fired glass. The ten windows of the east and west walls of the sanctuary on the lower level depict major events in the life and passion of Christ. The large south wall window is a reproduction of Leonardo da Vinci's "The Last Supper."

The church's lofty bell tower originally housed a ten-bell carillon, which has been increased to 15 bells. The original bells were bronze, cast by the Meneely Bell Company of Troy, New York, in 1926. The largest bell weighs 2,208 pounds. The basic tonality is the key of F, but an additional E-flat bell permits limited use of the key of B-flat. The original manual lever system was altered to an electronic keyboard in 1964."