The interior of the Stix, Baer, and Fuller store in Downtown St. Louis in 1959. 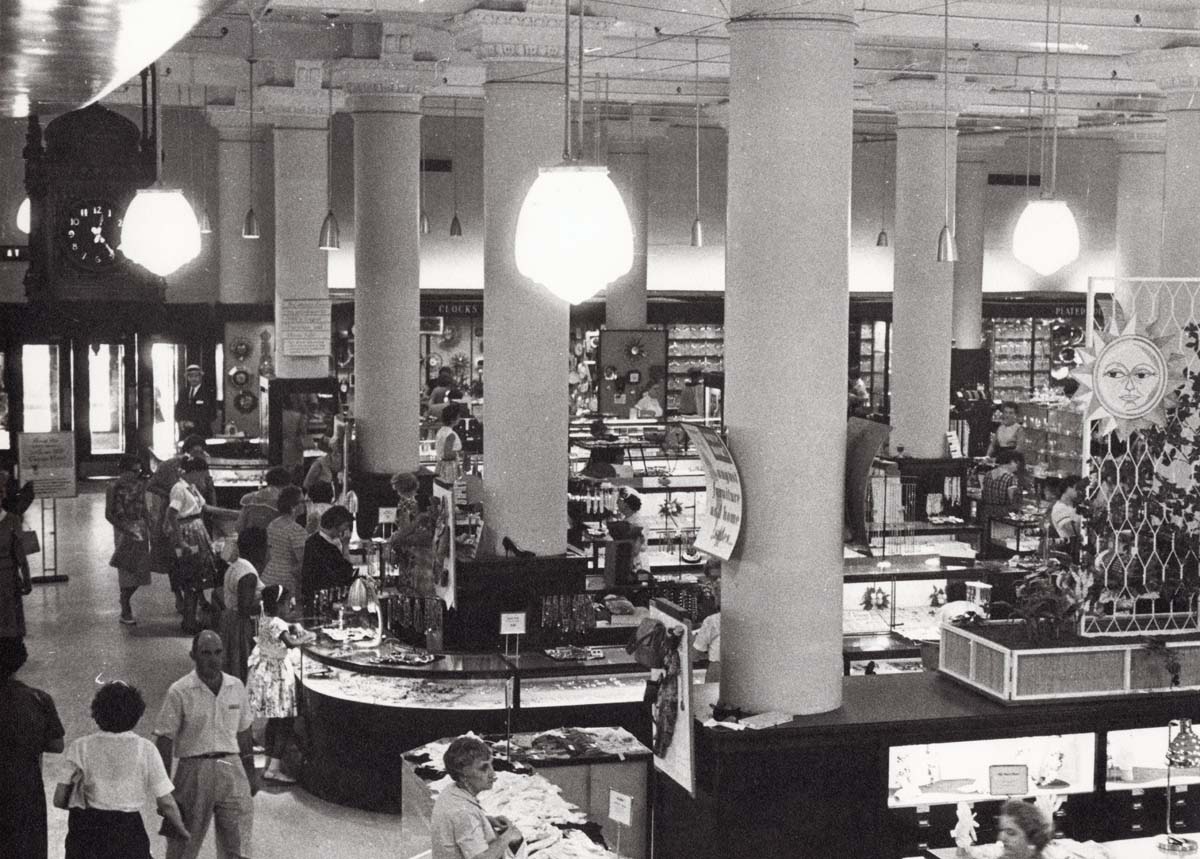 From Swathmore College's Database of Non-Violent Action:
"In 1947, The St. Louis chapter of the Congress of Racial Equality (CORE), a national group that aimed to practice the tactics of nonviolence against the oppressive forces of segregation, was formed.

In 1948, St. Louis CORE chose the Stix, Baer & Fuller Department Store as a target for a comprehensive non-violent desegregation campaign. CORE chose Stix for a number of reasons. First of all, the store layout was conducive to maximizing the exposure of the campaign. The store had a large, first floor lunch counter that fit 97 patrons and was visible to pedestrians passing by. Furthermore, the store was a focal point of downtown commerce and was frequently called the “Grand Leader.” Secondly, the overtly hypocritical policies of Stix provided a target for the letters, leaflets, and signs that CORE distributed as part of the campaign; Stix allowed Blacks to shop in the store, but would not serve Blacks at the lunch counter. Finally, Stix was owned by local St. Louisians who were seen as community leaders and thus more subject to the pressures of the community.

At the same time as the initiation of the Stix campaign, CORE members tried to work with officials at other downtown businesses, including Famous-Barr and Scruggs, Vandervoort, Woolworth’s, and other dime stores. However, Stix remained the focal point of the campaign and due to the wide variety of nonviolent tactics used there, in many ways it served as a case study for CORE in terms of what was effective and what was not.

CORE members began the Stix campaign by sending letters to Stix officials encouraging them to institute non-discriminatory policies. When these letters went unanswered, CORE members began distributing leaflets outside the store. The leaflets explained that African Americans were being denied service and pressed people to complain to the management. Sayings on the leaflets included, “All we ask for is fair play” and “You be the judge: Is it fair to refuse restaurant service to Negroes while accepting money from them in other departments?” CORE members also tailored their tactics to events that happened at the store, such as pamphlets specifically designed for attendees of an ecumenical association meeting that was held in Stix in November of 1948, so as to relate to a variety of different audiences.

On January 31, 1949, when white CORE members went to the lunch counter and ordered hamburgers and pie, they proceeded to share the food with four Black members who had joined them at the counter. Management put up closed signs on the counter. CORE proceeded to have a few more small sit-ins in the days that followed. CORE orchestrated parallel tactics of maintaining a sit-in presence at the lunch counter, as well as sending letters to the Stix officials. Soon CORE began to hold weekly sit-ins that averaged twenty to thirty people. By April of 1949, CORE had as many as 57 people sitting in the cafeteria for the whole day. Rather than sitting next to each other, the demonstrators sat in every other seat to occupy more room. They placed signs in front of them that read ‘We are being refused service’ with explanatory pamphlets.

The campaign began to draw media attention and several newspapers, including the St. Louis American, covered the events. Stix employees tried to counter the demonstration with a sit-in of their own so that the CORE members could not occupy the seats. However, this only stopped business, helping the CORE cause. Needless to say this move was quickly abandoned.

CORE continued diversifying their tactics. On May 12, 1949, two members attempted to receive service while holding their infant children. As a result, the local paper printed a picture of the two mothers and their infants being turned away. Two African American war veterans requested service; when they were turned away they filed formal complaints with the management and other customers bought food for them.

In the summer of 1949 students from the Association of Southern Churches arrived to aid the St. Louis CORE campaign. Ten of the white students would order food at the counter and then pass it to Black members. Meanwhile, CORE urged the African American community to boycott Stix Department Store all together. Many community groups supported CORE’s efforts by letting them explain their campaign to their members. On August 29, 1949, the NAACP recognized CORE’s efforts and subsequently passed a resolution advocating a citywide boycott of Stix, Baer & Fuller.

On July 28, 1949, CORE sent a letter to the Stix management saying that they would suspend the demonstrations to allow Stix time to change their policy and save face. CORE members also emphasized that most white customers had shown willingness to share the counter with Blacks. CORE’s withdrawal allowed them to regroup and focus on other surrounding businesses. However, leaders of CORE continued to send letters to the Stix management. On November 31, 1951, St. Louis CORE leaders Walter Hayes and Charles Oldham met with Stix executives. They discussed their successes with other stores in the area, but the Stix executives refused to change their policies.

In April 1952, Charles Oldham, who was the acting president of CORE, composed “A Plan for Establishing Equal Restaurant Service in St. Louis Department Stores” and sent it to influential community leaders. The plan received plenty of positive feedback and fed the publicity of the campaign. It reached numerous members of the community as well as the inner circles of local businesses. Stix held their ground through 1953, but in 1954 the department store finally opened its counter to white and Black customers alike."