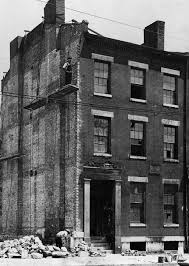 Front view of the The Eugene Field House. 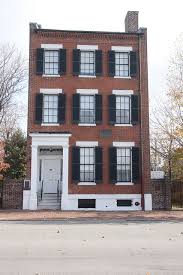 The Field House is significant as the home of Roswell Field, the pivotal attorney who brought into federal court the freedom suit of slave Dred Scott. The trial took place in 1847, and focused national attention on the slavery issue. While the Scott family had several attorneys during their battle for freedom, without Roswell Field’s creative legal strategy, the Supreme Court would never have been forced to hear the case. “This was the most controversial Supreme Court case of the nineteenth century, and remains one of the most significant cases in the history of the U.S. Supreme Court. The Court declared that no slave could be a U.S. citizen and furthermore found unconstitutional the Missouri Compromise of 1820 that abolished slavery in the territories. The Scott decision widened the political gap between North and South and helped precipitate the Civil War.”

Roswell Field son, Eugene Field, was an American writer, best known for his children's poetry and humorous essays. He is author of many poems and short stories during the late 19th Century. His most famous poems are “Winken, Blinken, and Nod” and "The Duel", to name but a few. Field first started publishing poetry in 1879, when his poem "Christmas Treasures" appeared in A Little Book of Western Verse. He died in Chicago of a heart attack at the age of 45.

The land, on which Field House was built, was once owned by Pierre Laclede, the founder of St. Louis. After he died Laclede’s estate sold the property to Auguste Chouteau, Laclede’s associate. Following Chouteau’s death in 1820, the land was conveyed to the City of St. Louis with the provision that revenue from its use be spent for public schools.

The Field House was part of a fashionable residential neighborhood, located at what was then 5 South Fifth Street - Walsh’s Row. Developed in the 1840s by Edward Walsh, it comprised twelve identical three-story row houses, including The Eugene field house. Today Eugene Field House is the sole survivor of Walsh’s Row. In 1934, when Walsh's row was about to be torn down, Irving Dilliard wrote a spirited editorial in the St. Louis Post-Dispatch decrying the destruction of Eugene Field's birthplace. An offer by insurance agents, Jesse P. Henry and Carl, formed a committee to save the house, and the Board of Education took possession, preserving that single unit of Walsh's Row. Under Henry’s leadership the building was restored and opened as a museum in December of 1936. The Board of Education maintained the house until 1968 when it transferred that function to the Landmarks Association of St. Louis, Inc., that oversaw the house until 1981 when the Eugene Field House Foundation took over.

In March of 2007 the Eugene Field House was designated as a National Historic Landmark by Interior Secretary Dirk Kempthorne.

February to December: Wednesday to Saturday from 10:00 am - 04:00 pm; Sunday from Noon - 04:00 pm; Monday, Tuesday & National Holidays is Closed January: By Appointment Only