This 1776 Spanish fortification and surrounding land was used as an encampment, training grounds, and staging point for the invasion of the Philippines during the Spanish-American War (1898-1906). Some units stationed here, such as the famed 10th Calvary, "Buffalo Soldiers", an all-Black unit, would be shipped to Cuba to fight alongside Teddy Roosevelt and his Rough Riders. After Cuba, The Presidio was home again as the 10th Calvary prepared for the Philippines.

9th and 10th Calvary "Buffalo Soldiers" pose at the Presidio 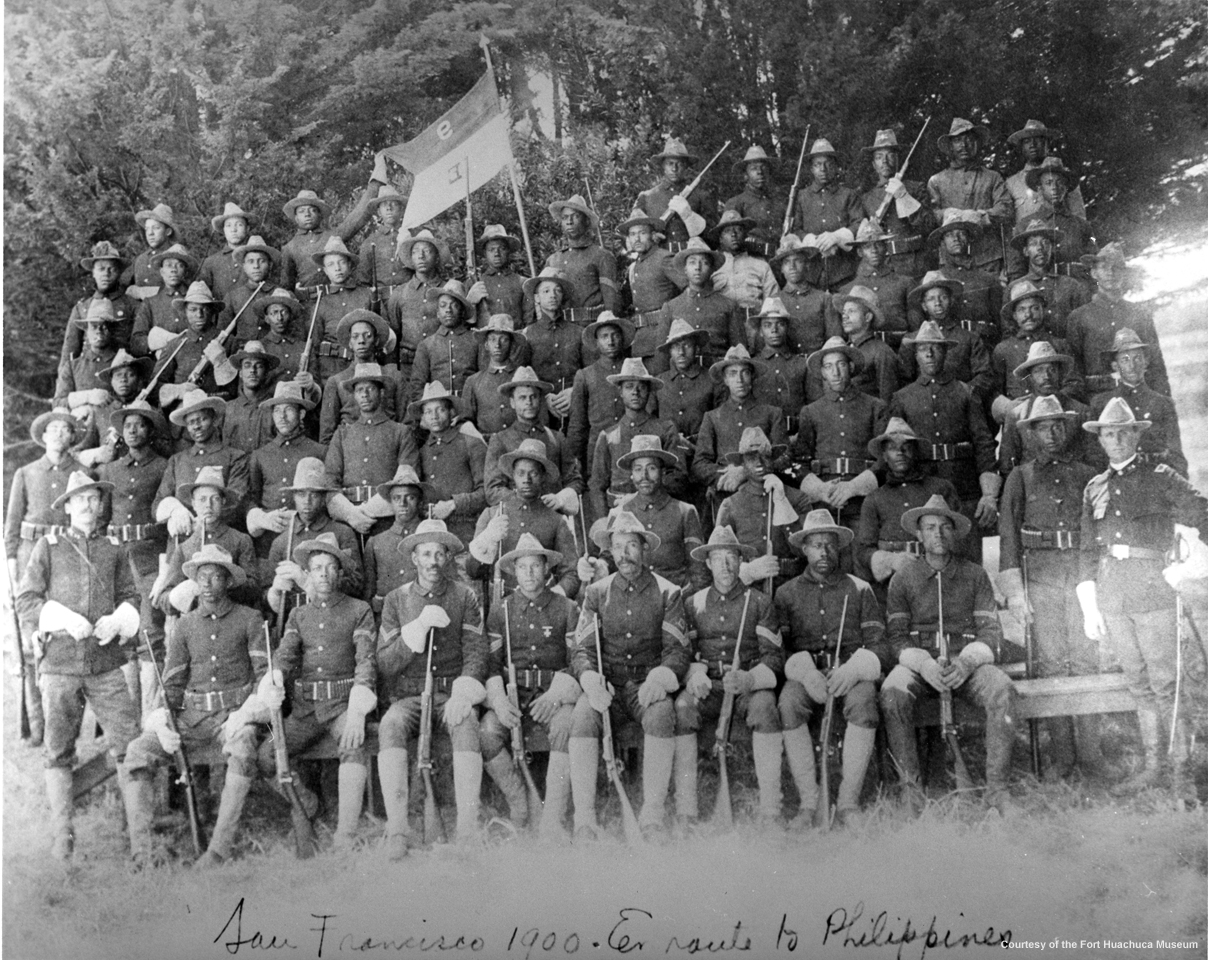 First burials at the San Francisco Cemetery in 1899 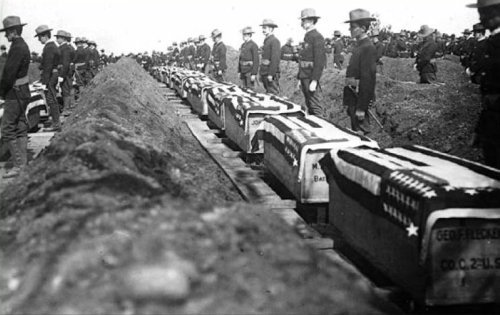 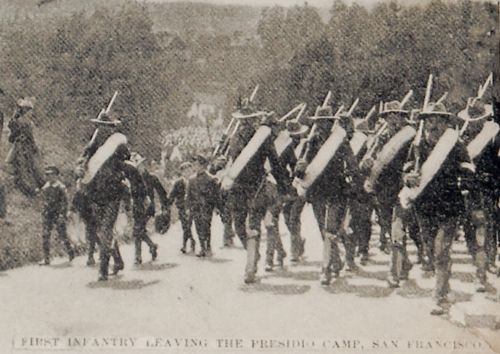 One of the camps at the Presidio 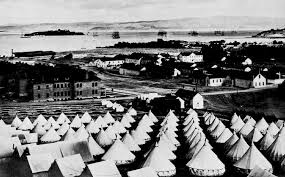 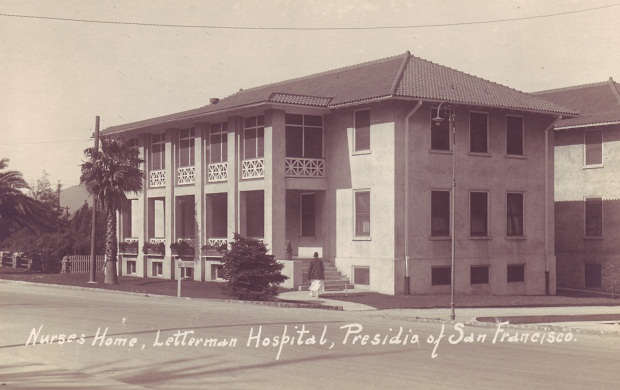 Soon after the USS MAINE exploded off the coast of Havana Harbor in Feb. of 1898, the now famous yellow journalism called for war against the aged and decaying monarchy of Spain (who were in loose control of Cuba at the time). War was declared and it was deemed necessary to free Cuba as well as the Pacific from the Spanish fleet. One such area of focus was the Philippine Islands.

Due to its west coast location and incredible harbor, the Presidio was selected as the US military's staging point for the invasion of the Philippines and for the Navy's incursion against the Spanish Fleet. In May of 1898, the first soldiers arrived: The 1st California Infantry and the 2nd Oregon Infantry. Soon, troops from Montana, Washington, Wyoming, Kansas, Iowa, Tennessee and Utah were sent to the Presidio. By 1900, some 80,000 troops would come to the Presidio.

With such a large number of troops arriving and living in tent-cities on Presidio grounds, the cramped area was soon steaming with illness. This situation caused the military to improve sanitation and medical care for the troops in the Presidio, which still plays a role for the area of San Francisco today.

However, for many of these troops in the Presidio, they arrived to the Philippine Islands too late to fight the Spanish. This was due to the fact that Spain was rousing defeated in seven months. Yet, these troops arrived in time to fight Filipino rebels, the same rebels that had been fighting Spanish presence and now switched to fight the American presence after helping eradicate the Spanish. The troops and the treaty with Spain and other Filipino leaders ensured American would hold onto the Philippines as the rebels were sorted out. One US military officer to lead the fight against the rebels was John J. Pershing, whose fame would come in a short few years during WW1.

Fighting would ensue from 1901-1902 after rebel leader, Emilio Aguinaldo, was captured. By this time Teddy Roosevelt had gone from leading the Rough Riders in Cuba, becoming Vice President under McKinley and then succeeding McKinley after he was assassinated in 1901. In 1903, Pres. Teddy Roosevelt visited the Presidio. His color guard was the 10th Calvary, the famed "Buffalo Soldiers" he fought alongside in Cuba. The 10th Calvary had been station in the Presidio during the war.

After the war, the Presidio would not be used on such a large scale until WW2. In 1994, Congress voted to close the Presidio as an active military installation, ending its 219 years of use for military purposes. That same year it came under the reign of the National Park Service.

Located to this day are the following:
Montgomery Street Barracks- Red brick barracks constructed between 1895-1897. This construction was part of the US military's efforts to expand the Presidio to enable a more permanent presence.  With sickness sweeping through the camp as troops arrived in 1898, the Army General Hospital took over the barracks temporarily.

Ordonez Gun- This artillery piece was created in 1880 by Capt. Salvador Diaz Ordonez and used to defend Spanish harbors, military possessions, and other overseas installations. This one gun was supposedly taken after being damaged during the shelling of Subic Bay in the Philippines by the USS CHARLESTON IN 1899. Yellow Journalist and publisher, William Randolph Hearst brought the gun back to San Francisco, where the US Army acquired it in 1973 and brought it to the Presidio.

Tennessee Hollow- Site of the encampment of the 1st Tennessee and 1st Utah Volunteer Infantry regiments. Originally the site of one camp, Camp Miller, it was split into two, Camp Merriam and Tennessee Hollow were created.

Camp Merriam- Created after Camp Miller was split into two camps, this was named after Brigadier General Henry C. Merriam, commanding officer of the Department of California. This campo is located by one of the Presidio's entrances, Lombard Gate. This camp held the first troops to arrive in the Philippines. Soldiers at the Presidio considered Merriam to be far superior, sanitation wise, then other areas.

Lombard Gate- Two sandstone pillars decorated with army insignia and flanked by cannons captured during the war. Constructed in 1896 to mark boundaries and improve the Presidio's appearance for San Francisco residents. Most troops when marching towards their ships, marched under the gate.

51st Iowa Volunteer Infantry Monument- Marks the site where the 51st Iowa camped. They were stationed from 1898-1899. Nearby are barracks built from 1903-1909 to provide better housing for soldiers.

Letterman Hospital Complex- Originally a tent hospital at Camp Merritt, located in the southern section of the Presidio, that soon became overwhelmed by the sick troops stationed here. Temporarily moved to the Montgomery Street Barracks after Merritt closed in the summer of 1898. This temporary location then became permanent per orders by the military because of its proximity ti the troops and access to docks. This US Army General Hospital was then named Letterman Hospital in 1910. The first stage of construction was in 1899 and was praised a model modern hospital.

San Francisco National Cemetery- Constructed on land set aside in 1884 by the War Department, this is the first national cemetery on the west coast. The cemetery expanded so that it could hold interred bodies that came from abandoned forts throughout the west to rest alongside those who fought in the Spanish-American War. Major Generals Frederick Funston of the 20th Kansas (who captured rebel leader Aguinaldo) and William R. Shafter, who commanded all US forces in Cuba, are buried here.