Built by the U. S. Army as quarters for unmarried officers in 1903, the Georgian Revival-style Pershing Hall was named for General John J. "Blackjack" Pershing (1886-1924), who served at the Presidio of San Francisco beginning in 1913. As a fire precaution, Pershing Hall was constructed as three separate wings, and later served as Visiting Officers' Quarters until the Army turned the Presidio over to the National Park Service in 1994. Now, the building is listed on the National Register of Historic Places and National Historic Landmarks and has been converted into an inn, each wing of which is named for a general who once lived in the building. 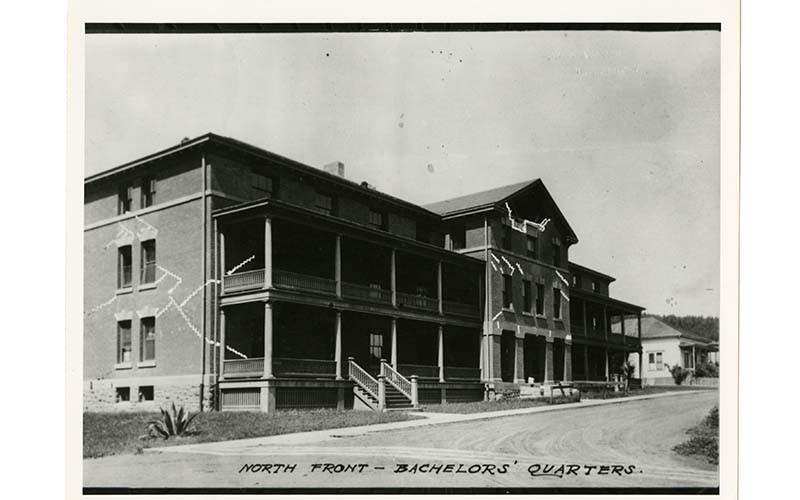 One of the wings is named after Pershing, who earned his nickname of "Blackjack" while leading the 10th Cavalry Regiment, one of the original African-American Buffalo Soldier regiments. After being assigned to the Presidio in 1913, Pershing's wife and three daughters died in a house fire; only Pershing and his son survived. Along with Pershing's accomplishments in battles in the Spanish-American War, the Russo-Japanese War, and World War I, he was also responsible for the construction of the Presidio's firehouse.

Another wing of the Inn at the Presidio is named for General Erasmus Keyes (1810-1895), commander of the Presidio at the beginning of the 1849 Gold Rush. To keep soldiers from deserting to become miners, the military allowed them to take on side jobs. Keyes himself invested in real estate and surveying, ran a prominent business in savings and loans, and served as President of a Mexican gold mining company.

The third wing is named after Inspector General James Allen Hardie (1823-1876), who served as Military Commandant of the Presidio during the Mexican-American War. Hardie also, unfortunately, aided Brigadier General John E. Wool in campaigns against Native Americans during this time period. Serving the Union during the Civil War, Hardie was promoted to Inspector General in 1864.