Nuns of the Battlefield Memorial

Although women were never officially employed as nurses during the American Civil War, roughly 4,000 worked as volunteers on both sides--both Union and Confederate. Of this number, nearly one-fifth were Catholic nuns who took on the role of battlefield nurse. The Nuns of the Battlefield memorial in Washington D.C. was constructed in 1924 to honor the role of these women in caring for the wounded of America's bloodiest conflict at a time when medicine was often brutal, misinformed, and unsanitary. Conceived and executed by Irish sculptor Jerome Connor, the monument is significant for being only one of two in the area to honor women for their roles in battle.

The memorial was the brainchild of Ellen Jolly, whose research into the Catholic nuns of the Civil War eventually became the first significant published body of work on the subject. 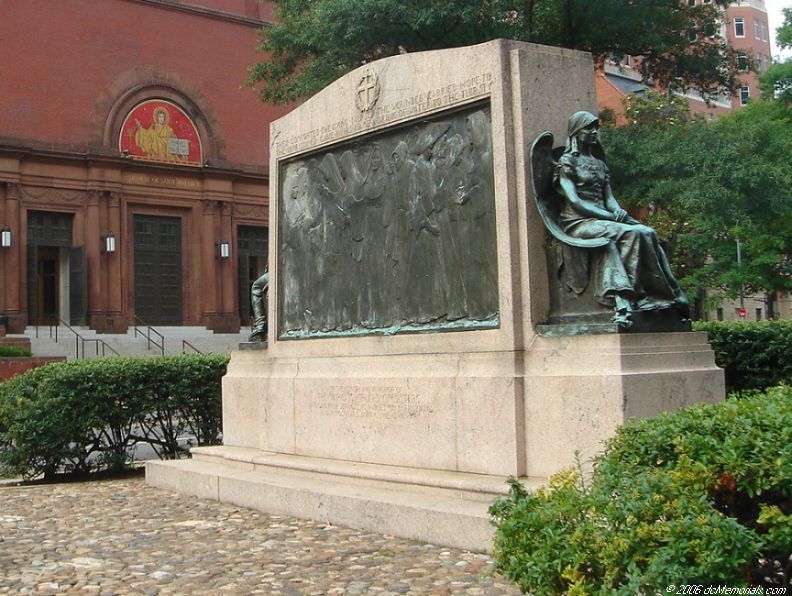 The memorial took nearly 10 years to be approved by Congress, and could only be constructed with private funds. 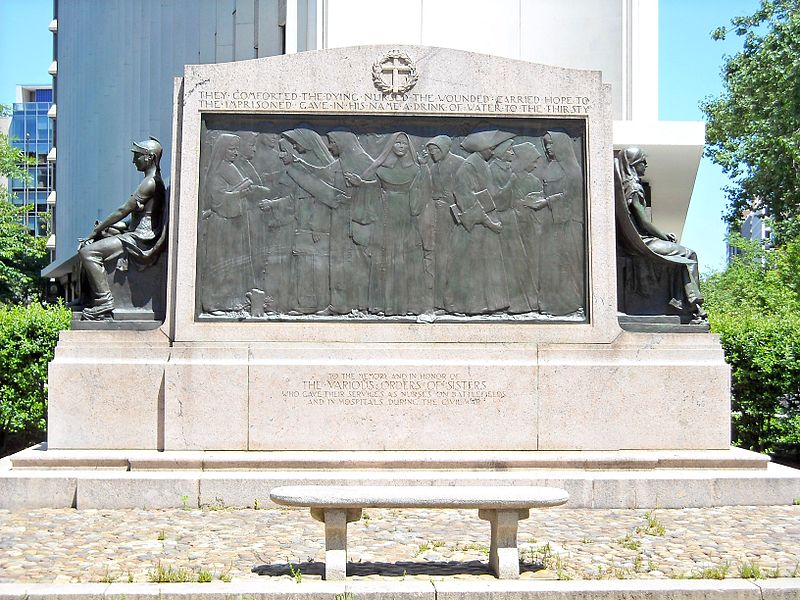 Close up of the memorial's front, which depicts 12 Catholic sisters. Nuns first served in an officially-recognized (and much praised) battlefield capacity with Florence Nightingale during the Crimean War of the 1850s. 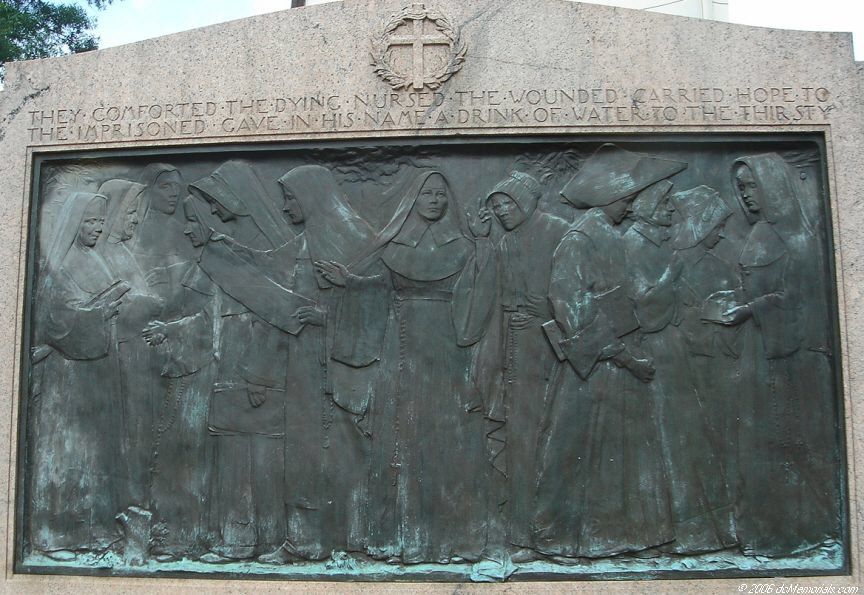 One of the nuns depicted as an angel, reflecting the Catholic belief in sainthood. Sculptor Jerome Connor was a devout Irish Catholic. His focus on Catholic themes led to his being commissioned for the monument. 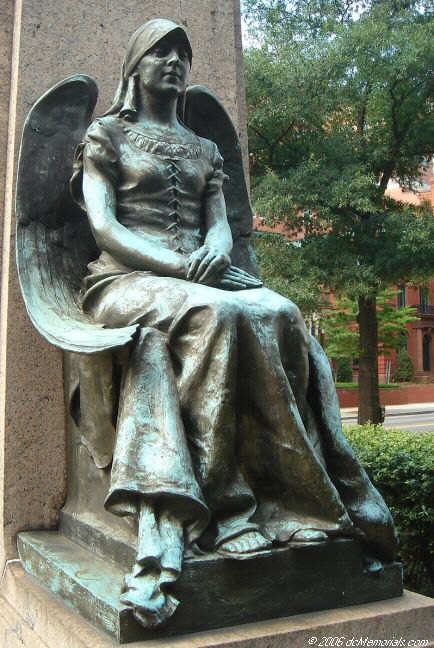 Another nun, depicted as Athena, connects the battlefield nuns to more universal western themes of wisdom and learning. The Catholic sisters were some of the Civil War's most educated nurses, most having been trained in hospitals. 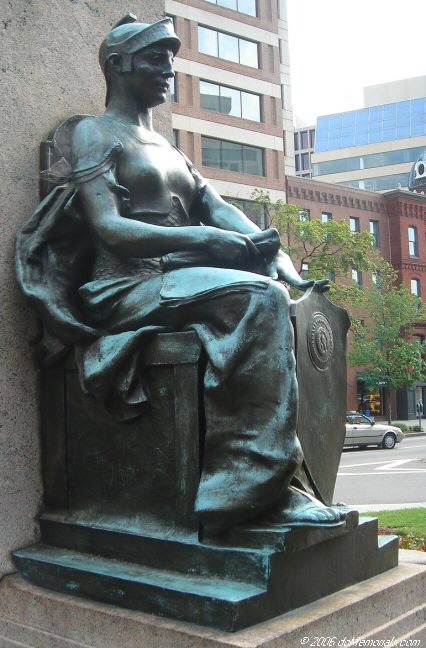 Nuns with several Union soldiers. Prior to the war, the Catholic church was much maligned in the predominately Protestant culture of the United States. The Catholic sisters' battlefield service did a great deal to rehabilitate that image. 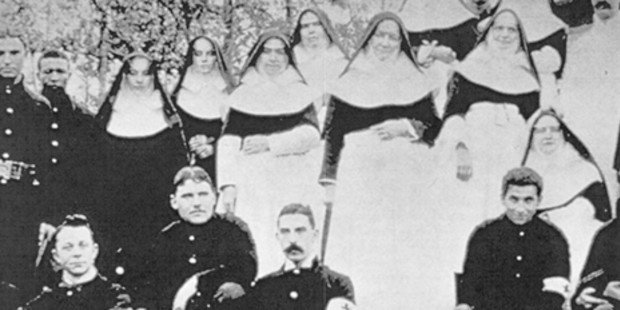 A Catholic Sister of Mercy comforts a Union soldier in a painting allegedly commissioned by Abraham Lincoln. Sisters, who could only serve as unpaid volunteers assisting the surgeons of both armies, were praised for their fortitude and discipline. 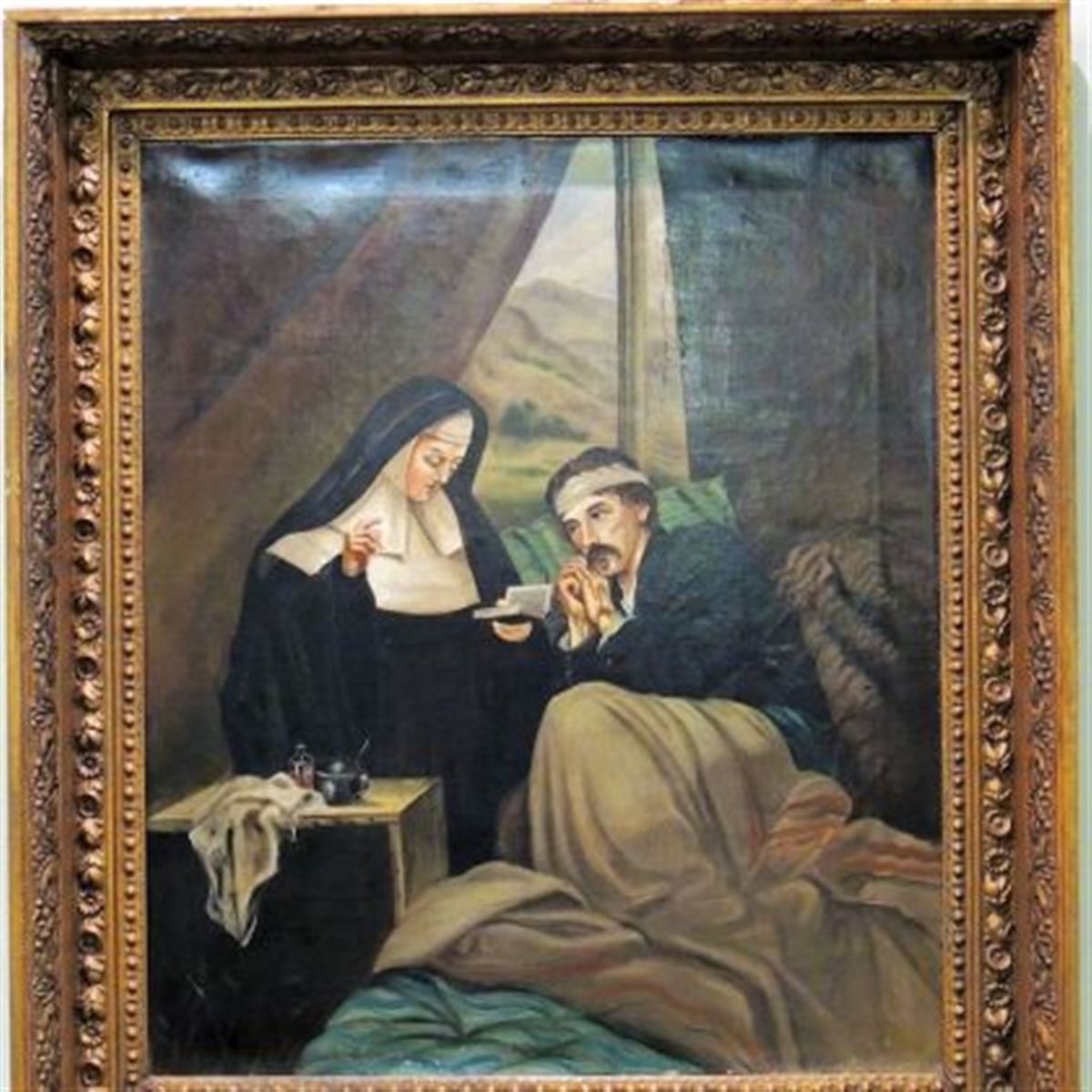 Of the Civil War's 620,000 dead, roughly two-thirds came not from battlefield wounds, but illness and disease. Medicines and doctoral practices of the era were relatively undeveloped, and as the casualty count of America's bloodiest war began to climb ever higher, battlefield hospitals on both sides found themselves critically understaffed. Female volunteers soon began to fill the gaps, despite having served for the first time in an officially-recognized capacity only a decade before under the pioneering Florence Nightingale during the Crimean War in Europe.

Of these, nuns were typically the only women with medical training, since many in the mid-19th century helped run hospitals. Transitioning into their newfound battlefield roles, they were praised for their hard work and were known to perform without complaint due to their extensive training and discipline. Indeed, the work of Catholic sisters belonging to a dozen orders was instrumental in reversing popular American opinion of the Catholic church, which prior to the war had been extremely negative (and often bound up in anti-immigration politics, which viewed predominately Catholic groups such as the Irish with suspicion). For several decades leading up to the conflict, Catholic nuns had often been forced to eschew their cloth habits in public for fear of being harassed or even attacked. By the end of the war, Catholic nuns were well-known for their kindness and medical professionalism in the face of horrific circumstances. One Union soldier wrote of a Catholic nurse:

"Amid this sea of blood she performed the most revolting duties for these poor soldiers. She seemed like a ministering angel, and many a young soldier owes his life to her care and charity...She was reverenced by Blue and Gray, Protestant and Catholic alike...Her name became a household word in every section of the North and South."5

Having heard the stories of the battlefield nuns for years, in 1914 Ellen Jolly (then the president of the women's branch of the Ancient Order of Hibernians, an Irish Catholic fraternity) proposed a monument to honor the work of these selfless females. Initially, the War Department turned down her proposal, citing a lack of written evidence to support the nuns' role during the war. Jolly spent the next decade compiling what would become one of the first substantial bodies of knowledge about female Catholic nurses on the battlefield.

Finally, March 29, 1918, Congress approved the creation of the sculpture, but stipulated that it would not be government funded. Jolly was instrumental in raising the funding, leading a committee that raised $50,000. The monument was dedicated on September 20, 1924.

The Nuns of the Battlefield memorial is formed out of a granite slab, sitting atop a granite base, and measures six feet by nine feet. On each end of the slab sits a bronze winged female figure. On one end, she holds a shield in her hand and a scroll in her lap, while the figure at the other end ears a long dress and a scarf around her head. On the face of the granite slab is a bronze bas relief panel, picturing twelve nuns. Both above and below the panel are inscriptions. The inscription above says:

"THEY COMFORTED THE DYING, NURSED THE WOUNDED, CARRIED HOPE TOTHE IMPRISONED, GAVE IN HIS NAME A DRINK OF WATER TO THE THIRSTY."

Below the panel, the inscription reads,

"TO THE MEMORY AND IN HONOR OFTHE VARIOUS ORDERS OF SISTERS WHO GAVE THEIR SERVICES AS NURSES ON BATTLEFIELDS AND IN HOSPITALS DURING THE CIVIL WAR."

On the back of the slab are the words,

"ERECTED BY THE LADIES AUXILIARY TO THE ANCIENT ORDER OF HIBERNIANS OF AMERICA. A.D. 1924BY AUTHORITY OF THE CONGRESS OF THE UNITED STATES."

The bas relief panel itself is signed with the artist's name, "JEROME CONNOR," and the year, 1924. Although born in Ireland, Jerome Connor lived for a time in Massachusetts. He was the son of a stonemason, and while growing up he help jobs such as a stonecutter and bronze founder. He was trained in blacksmithing, but eventually found sculpture, and was commissioned for several projects. After the completion of the Nuns of the Battlefield sculpture, he returned to Ireland, where he opened a studio in Dublin, but unfortunately never found a great deal of success.