The Wells Fargo History Museum is part of the Old Sacramento State Historic Park, which is itself a National Historic Landmark district.

The B.F. Hastings Bank Building in its 1850s heyday. This photograph depicts the structure between 1855-56, when both Wells Fargo and the State Supreme Court occupied the bulding simultaneously (Library of Congress). 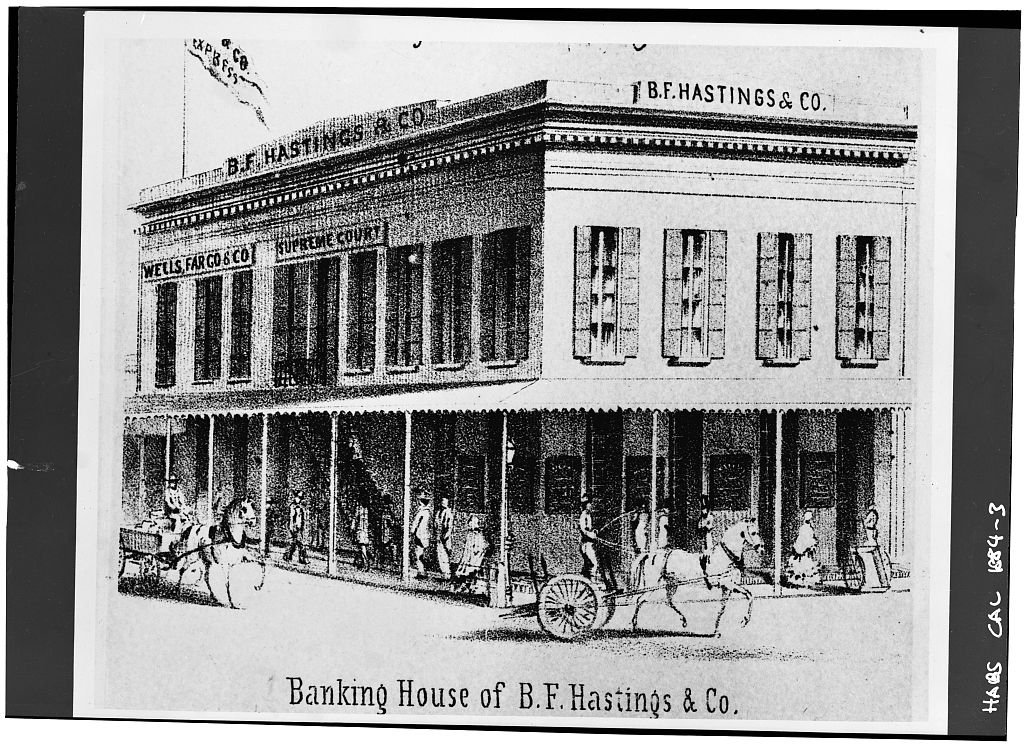 In 1936, the building appears to have duplicated its 1850s setup--with private business below and government functions on the second floor. (California State Library). 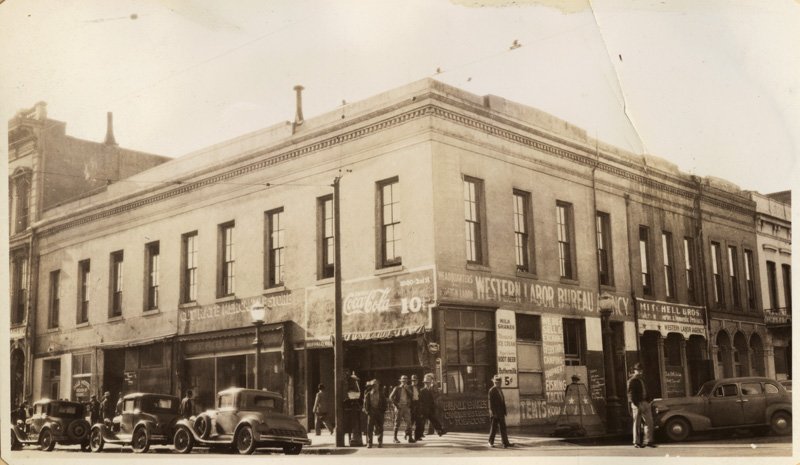 The building sunk further into neflect in the 1950s. By 1960, only the Lucky Bottle Shop would remain (Library of Congress). 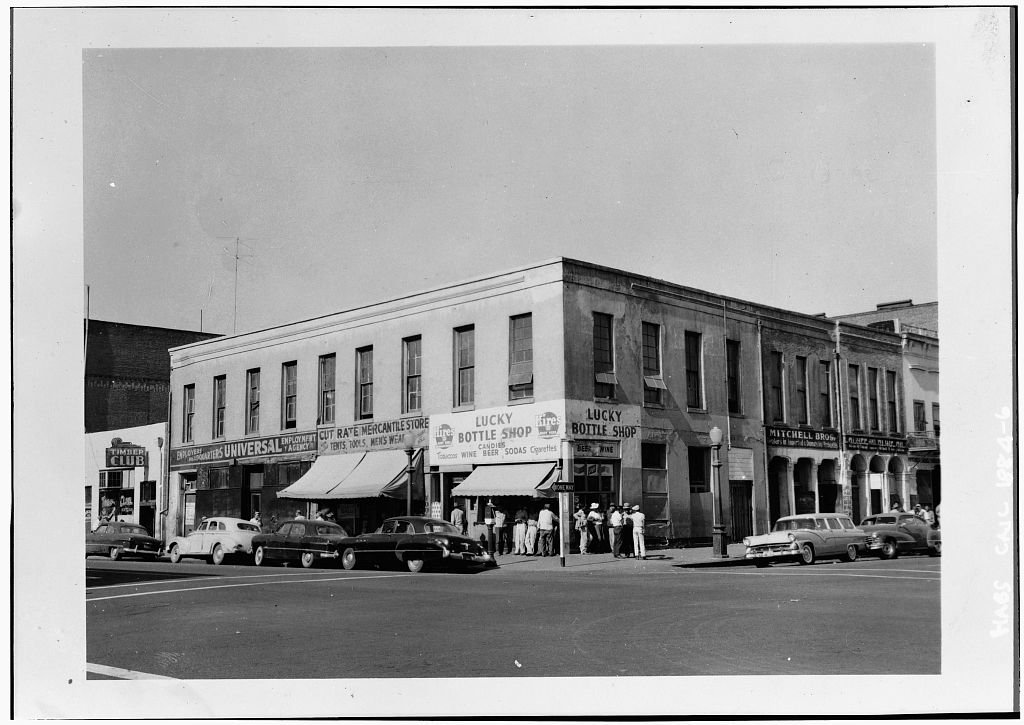 This postcard, however, finally shows the reversal of the trend. California Parks and Recreation began restoration work in 1971, and in 1976 the reconstructed building was dedicated as part of the State Park system (Sacramento Public Library). 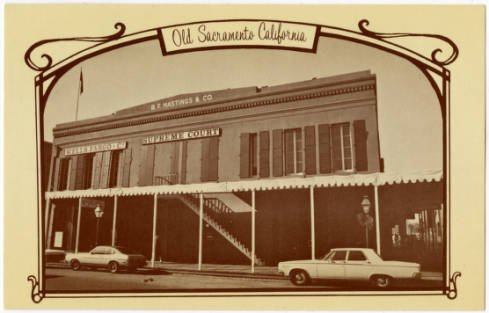 A fanciful depiction of a Pony Express rider from the Missouri Division of Tourism. Pony Express riders rode in a relay system that stretched from St. Joseph's, Missouri, to Sacramento, California. Mail could reach San Francsico in 10 days. 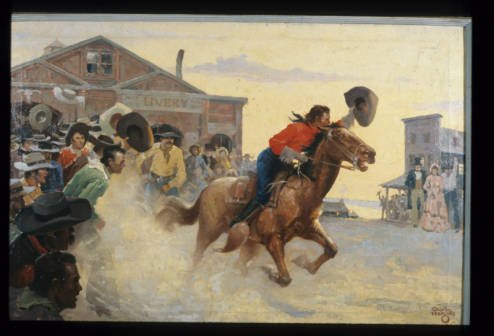 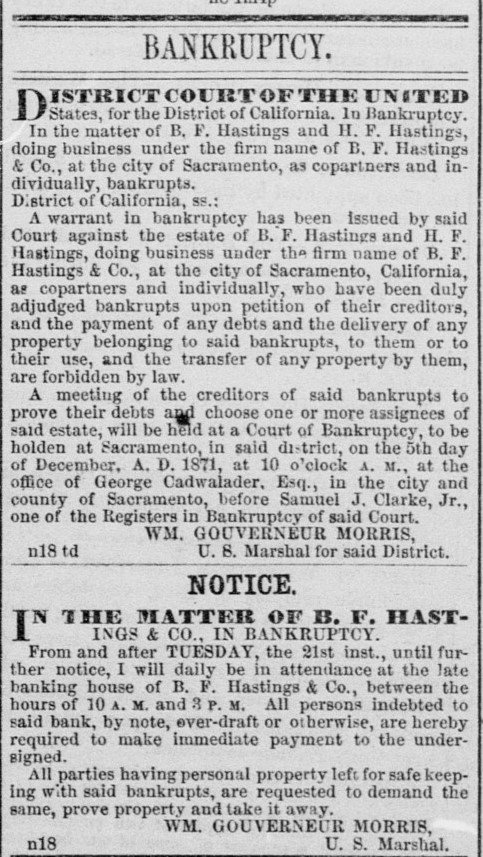 Theodore Judah, architect of the Transcontinental Railroad. Working with "The Big Four" businessmen who owned the Central Pacific Railroad, he masterminded a route through the Sierra Nevada Mountains, though he would die in a year into construction. 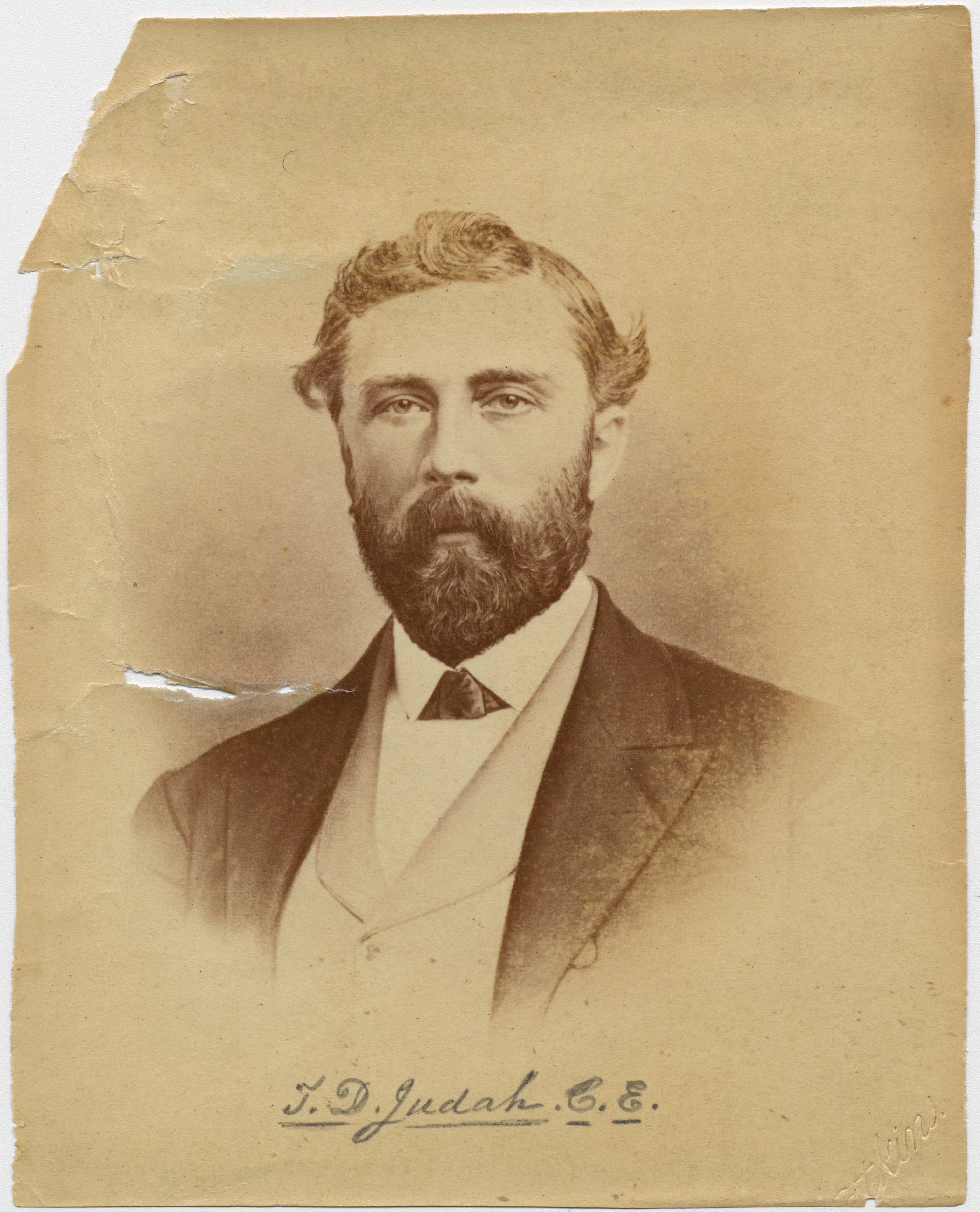 Originally part of John Sutter’s substantial land grant from the Mexican government in the 1830s, the area of present-day Old Sacramento was quickly occupied by squatters when the first wave of fortune-seekers arrived to begin the California Gold Rush of 1848-49. Unable to eject the thousands of erstwhile gold miners consuming his crops and livestock, Sutter’s once-mighty estate fell rapidly into ruin, and in 1850 he gave his son permission to divide the land into lots and sell it off. This development gave rise to the modern city of Sacramento, expanding out from the original core of Sutter’s “New Helvetia” estate near Sutter’s Fort and the American River.

This population explosion quickly gave rise to all the industries necessary to support growth. A grocery was first built at the corner of 2nd and J Streets in 1851, but burned to the ground during the terrible fire that gutted the area in autumn 1852. Its proprietor was unable to fund a new structure at the site, and the property soon sold to entrepreneur Benjamin Franklin Hastings in March 1853. Hastings moved quickly, erecting a new structure and opening his eponymous bank the following month.

Hastings also leased office and store space to a variety of early Sacramento businesses, the roll call of which is instructive as to the the needs of a booming young city: lawyers, bankers, engineers, telegraph companies and clothiers all occupied space at one time or another. Distinguished tenants included Wells Fargo Bank (1854-57) and Theodore Judah (1854-55). The latter, a young engineer then known as “Crazy Judah” for his scoffed-at dream of a transcontinental railroad through the Sierra Nevada Mountains, later became chief engineer for the Sacramento and Central Pacific Railroads, and was the western architect of that very Transcontinental Railroad--though he would die of illness in 1863 before it was completed.

Before this dream of a coast-to-coast railroad was completed, without a similarly far-reaching telegraph line in place, mail usually required just under a month to make passage from New York to Panama, across the Isthmus to a waiting ship in the Pacific, and northward to San Francisco. From this difficult situation was born the Pony Express, a system by which a network of riders relayed mail as quickly as possible from station to station from Missouri to California--a journey of over 1800 miles. The B.F. Hastings Building was the western terminus of the Pony Express (after that, mail was usually conveyed to San Francisco by steamboat). Though a remarkable achievement that could deliver mail across the country in as little as 10 days, the Pony Express was short-lived. Operating only from April 1860 to October 1861, the service was pushed into obsolescence by the completion of the transcontinental telegraph line that month. Despite its quick demise, the Pony Express nevertheless captured the public’s imagination, and its legacy has far outlived its economic consequences.

As the state’s Capitol required over a decade of construction, the California Supreme Court lacked permanent offices and chose to lease the upper floor of the B.F. Hastings Building from early 1855 until the end of 1869 (with a brief stay in another building from 1857 to 1859). Much of the foundation of California’s legal code was determined in the chambers of Hastings’ bank. The rebuilt B.F. Hastings features a full reproduction of the original Supreme Court chambers.

Hastings’ bank declared bankruptcy in November 1871. The building passed through a number of businesses over the following century--usually markets and convenience stores--and gradually fell into disrepair along with the rest of the district until the State Park system undertook a massive revitalization project in the 1960s. In 1971, they began the restoration of the B.F. Hastings Building--by then the oldest surviving structure in the district. The interiors had been much ravaged by various uses--in 1998, then-director of the California State Railroad Museum Walter Gray stated the project had really been a “reconstruction,” so extensive was the work required to restore Hastings to its former glory.

Today its principal attractions are the Wells Fargo History Museum, maintained by the Wells Fargo corporation itself (along with twelve additional museums around the country) and the restored State Supreme Court chambers and offices on the second floor. Featuring a wide variety of artifacts and interactive exhibits, it is considered one of the leading attractions of the Old Sacramento historic district.