The Cahokian Mounds of southern Illinois remind visitors of an ancient civilization and the thriving city that once existed in its place, centuries before Europeans ever "discovered" the Americas. Sadly, most Americans have not yet discovered this UNESCO World Heritage site, which showcases the "Cahokia" civilization (their real name is unknown, as they had not adopted a written system) from the 8th century through the 15th century. To understand American prehistory, however, this site is a must-see.

The climb up Monk Mound 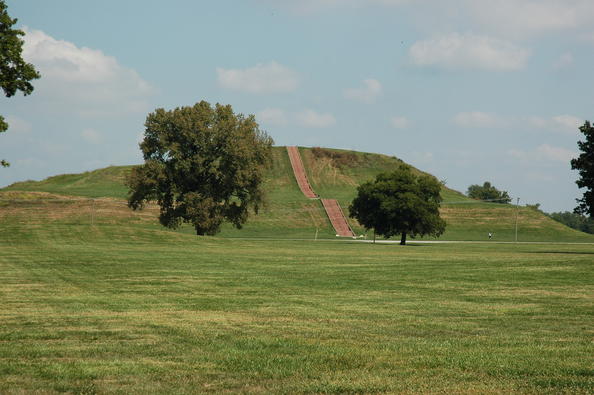 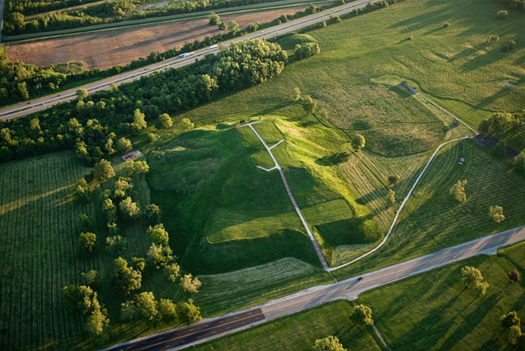 Although a highly civilized society, what is today known as the Cahokia culture did not have a system of writing, leaving much of the history also a mystery. Inhabited from around A.D. 700 to 1400, the reasons for the large city's decline is unknown.

Early European settlers, who were biased against the idea that Native Americans could have ever existed in such a significant civilization, when discovering the remains at Cahokia, suggested some other foreign society, such as the Phoenicians, must have arrived in the Americas and built it.1 Thus little research was given to the vast mounds that had been left by the Cahokia. Only in the 20th century did archaeologists turn their attention to Cahokia, where hundreds of houses upon houses were unearthed, indicating the expansive city. Though perhaps not huge by today's standard, at the city's peak (around AD 1050-1200), it held a population of an estimated 20,000 people--a number that would not be rivaled anywhere in America for several centuries. Slowly historians began to realize that an ancient civilization (and not one founded by Phoenicians) once existed among the Native Americans. Incredibly a grand plaza, used for religious ceremonies, feasts, and sporting events, the size of 45 football fields was also uncovered.

The discovery of the civilization also abolished the Western (and patronizing) idea of the "noble savage," who had always lived in little egalitarian (mostly nomadic) communities. Instead, a complex community with significant farming practices and which practiced ritual human sacrifice and deep hierarchies were discovered. One well-honored man, for example, was found to be buried along with 53 young women and several decapitated men. However, how far-reaching the hierarchies were, who was sacrificed and why, and what the system of community actually looked like remain unclear. Was the city simply an unusually large Mississippi community? Or was it brought together by a leader, who centralized his/her power at Cahokia, but extended it across a greater region? These are the questions visitors will be forced to ponder when given the chance to encounter the incredible remains of the mysterious Cahokia civilization.

Grounds: 8 am to dusk. Interpretive Center: May 1 through October 31: Open 7 days a week, 9am to 5pm Beginning September 3rd, we will be closed Monday and Tuesday until further notice. November through December: Closed Mondays and Tuesdays Open