Levine Museum of the New South

Although it was officially incorporated in the state of North Carolina in 1991, the Levine Museum of the New South didn't officially open its doors at the state-of-the-art 200 East Seventh Street location until 2001. With 40,000 square feet of exhibit space, this interactive museum houses the nation's most comprehensive interpretation of post-Civil War Southern history. The permanent exhibit, Cotton Fields to Skyscrapers: Reinventing Charlotte and the Carolina Piedmont in the New South, traces the history of the region from the end of the Civil War to the present, using a number of interactive tools. Seasonal and special exhibits complete the experience and focus on certain aspects of Southern culture and history. The Levine Museum of the New South has won numerous awards, including the National Award for Museum and Library Service. 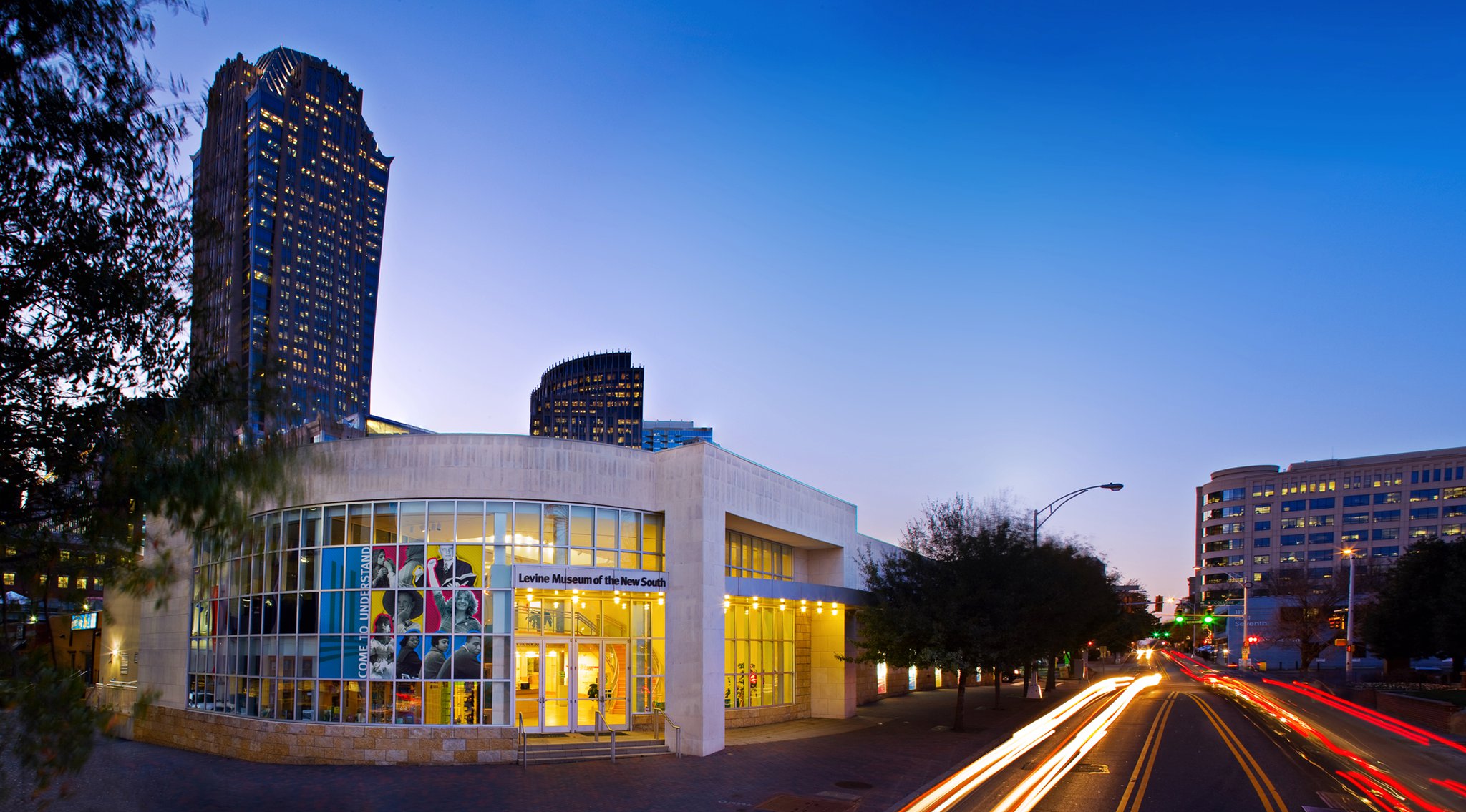 Planning for what would eventually become the Levine Museum of the New South began in the summer of 1990. Members of the Mecklenburg Historical Association, a group of Charlotte's local historians dedicated to preserving the Queen City's history, developed the idea of the Museum of the New South during that summer. These members then approached Sally Robinson, a community leader and cultural advocate, about helping them make their concept a reality. Robinson formed a group of local historians, university professors, and community letters to consider the museum proposal. This group decided that the museum would be called the "Museum of the New South," due to the focus the museum would place upon the transformation of the Charlotte area from the end of the Civil War to the present day.

On April 25th, 1991 the museum was officially incorporated in the state of North Carolina as the Museum of the New South. Although the museum was officially incorporated, the museum's board of trustees decided to operate without a building due to a lack of support in the community (at the time) for building another museum, and the flexibility in regards to exhibitions and programs that the board felt that not having a building would offer. Therefore, for the first four years of its existence, the Museum of the New South was a museum without walls. The museum's exhibits were displayed in public places, often in the form of interactive kiosks. Unlike many other museums, the Museum of the New South also organized numerous outreach programs for the Charlotte community.

In the spring of 1994, the museum's board and collection of local historians began to focus more on developing relevant collections and permanent exhibits for a future museum location. With the help of the state of North Carolina and private funding, the museum's first official building was purchased at 324 North College Street in Charlotte. The museum opened its first floor in January of 1996 after undergoing renovations, with the permanent exhibit of New South: A to Z. The museum focused on a number of different topics pertaining to the New South, including women reformers, African American churches, and World War II.

The centerpiece of the museum is the exhibit Cotton Fields to Skyscrapers: Reinventing Charlotte and the Carolina Piedmont in the New South. This permanent exhibit spans 8,000 square feet and includes more than 1,000 artifacts, images, video clips, pieces of music, and oral histories. These various forms of media use Charlotte and its 13 surrounding counties as a case study to illustrate the profound changes in the South since the Civil War. This exhibit provides visitors with six different environments to interact with, including a lunch counter with personal, oral accounts from local sit-in leaders, Charlotte's main street, where one is able to try on a hat in an early Belk department store, and the opportunity to sit in Good Samaritans Hospital Chapel, one of the first African American hospitals in the South. Along with this permanent exhibit, the Levine Museum also offers a number of visiting exhibits which focus on various topics pertaining to Charlotte's rich history.

The Levine Museum of the New South has won numerous awards. In 2002, the museum's Cotton Fields to Skyscrapers exhibit was named one of the best exhibitions in the Southeast in an annual competition sponsored by the Southeastern Museums Conference Curator's Committee. In 2005, the museum's exhibit COURAGE: The Carolina Story That Changed America commemorating the 50th anniversary of Brown v. Board of Education was given the most prestigious recognition for achievement in the preservation and interpretation of state and local history by the American Association for State and Local History. Also, in 2005 the Levine Museum of the New South was one of six recipients of the National Award for Museum and Library Service, the federal government's highest honor for community service for museums and libraries.