John L Nichols served as Bloomington's first full-time architect and from 1890 to 1920, he designed hundreds of commercial and residential structures in the city. Nichols completed this elliptic-shaped home in 1900 and included the home as one of the hundred designs in his 1902 catalog entitled Album of Artistic Dwellings. Nichols also lived in the home for two years before selling the house by 1905 to a railroad company for use as temporary housing for employees. After World War II, ownership of the home changed several times and the structure fell into disrepair. A renovation during the 1980s likely saved the structure from demolition and in recent years, it has served as an attorney's office. 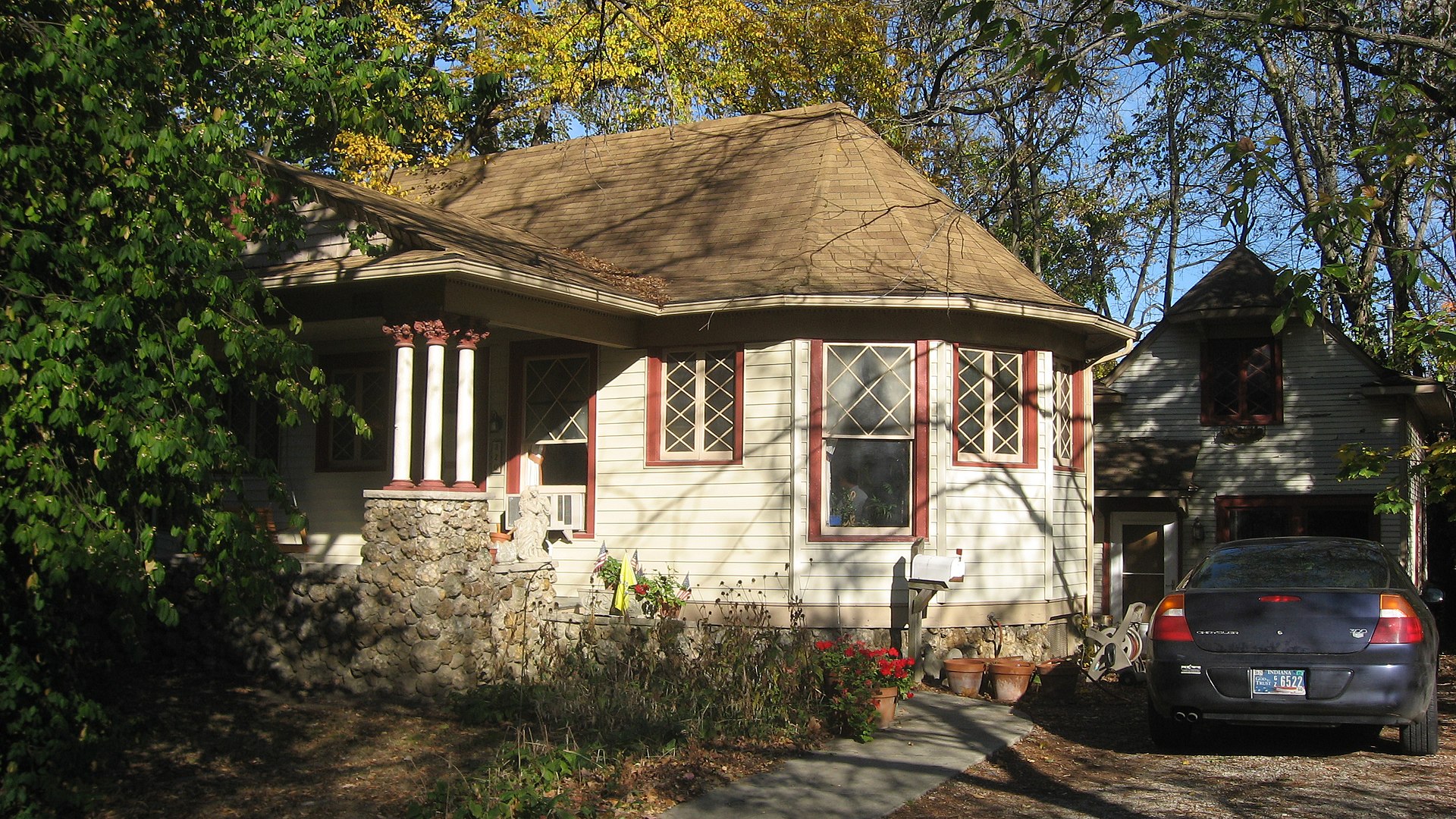 John L. Nichols, born in 1859, served as Bloomington's first practicing architect and the only one active in the city for most of his life. The city commissioned him to design numerous city buildings in the late nineteenth and early twentieth centuries, including several buildings within and near historic Courthouse Square, such as the Princess Theater in 1913. In addition to the vast amount of commercial construction he developed, Nichols designed an abundance of well-regarded residences, such as the historic Batman-Waldron mansion in 1895. Moreover, he also built several smaller residences and, in 1902, published a book of residential designs. His own historic home, finished in 1900, stands as a demonstration of his work, which he included in his book.

Nichols' Album of Artistic Dwellings, a catalog of more than 100 of his plans that he published in 1902, included the design of his historic residence. Its quasi-elliptical shape exists as one of the home's most striking features, with its long axis parallel to the street. Behind the three primary rooms that make up the ellipse (living room, dining room, and bedroom) is a rectangular wing containing a second bedroom, kitchen, bath, pantry, and original glassed-in porch. The home also includes several ornamental details. However, the home's most distinctive feature involves the use of geodes (spherical limestone rocks lined with crystals) for the front foundation and the base of the porch. Geodes abound in Monroe County, but their use in construction is exceptionally rare. Nichols owned the historic home for only five years and only lived in it for two. In 1905, he sold the home to the Indianapolis Southern Railroad, which was constructing a railroad line adjacent to the property at the time. The house served as the home to one of the railroad employees (or several) for a dozen years and then remained mainly vacant until 1940. From 1940 to roughly 1980, the house changed hands many times and suffered from decline. During the 1980s, a new owner purchased the home and renovated it in an attempt to restore it to its original state.

A reporter noted in Nichols' obituary (1929) that he and his company produced 632 designs in 1908 alone, a statistic that has been repeated in numerous accounts. While that monumental achievement is not easily substantiated, it is clear that Nichols had a hand in building hundreds, if not more than a thousand, commercial and residential structures. He got his initial training from his father, Hiram J. Nichols, an early settler and land surveyor of Bloomington, and a late nineteenth-century contractor who built the first two buildings located on Indiana University's current campus. Around that time, John Nichols moved West. By 1886 he worked in Denver as a draftsman and supervising architect. However, the Panic of 1893 had a profound effect on Nichols' career. In the wake of the financial turmoil that took hold in the U.S., construction work proved scarce. In 1895, Nichols decided to return to Bloomington, where he started his own architectural business. As the economy recovered and Bloomington grew, a population and building boom emerged. Thus, John Nichols' work largely transpired between the 1890s and 1920s, during that time of city expansion. As the city's only true practicing architect (and a talented one), he seized on the city's rapid expansion and turned into into a highly successful career. As a result, Nichols' fingerprints are found throughout the city, with his own home serving as a fine demonstration of his legacy.