Scene depicting Capt. Gillespie fighting off lancers that surrounded him 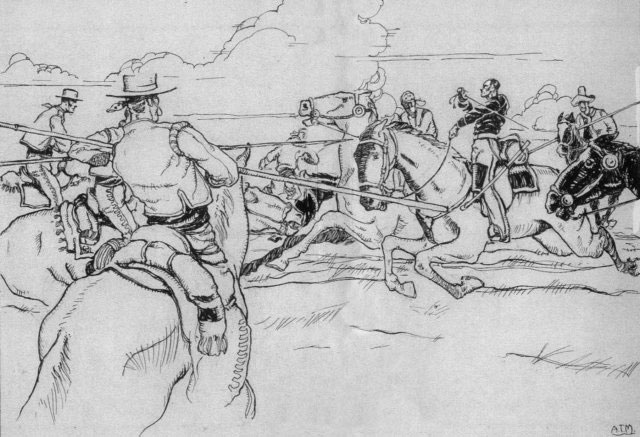 "Charge of the Caballeros" 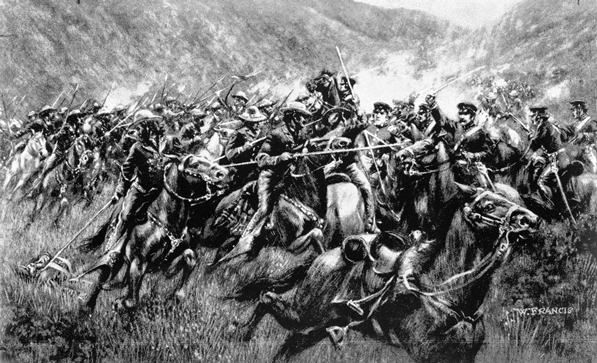 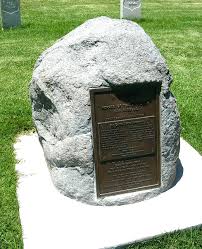 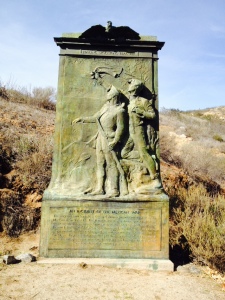 1847 sketch of troop movements during battle 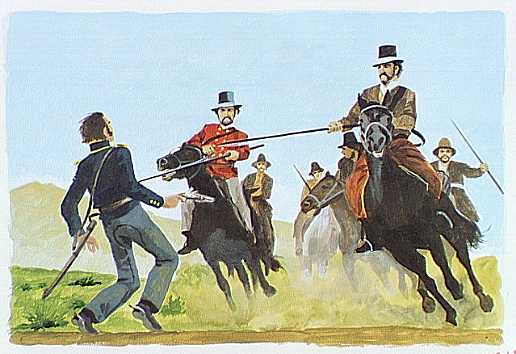 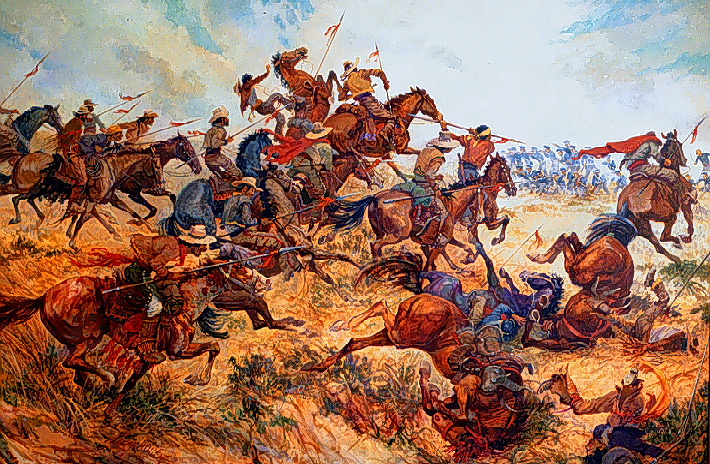 General Stephen Kearny had orders to assume command of US forces in California with his, but sent back most of his force after meeting up with Kit Carson near Socorro on 6 Oct. and hearing of the seizure of California by Commodore Robert F. Stockton, Kearny keeping only Companies C & K, 1st Dragoons, about 100 men. Kearny's force, guided by Carson, reached Warner's Ranch in California on 2 Dec., in a greatly weakened condition. They had just completed a 2,000 mile march; the longest march in U.S. Army history.

After turning back the Americans trying to recapture Los Angeles in the Battle of Dominguez Rancho, Capt. Jose Maria Flores sent about 100 men to San Luis Obispo to confront Lt. Col. John C. Fremont's 300 men moving south from Monterey, and sent another 100 men to watch Stockton's base at San Diego, but Flores kept the bulk of his men at Los Angeles.

Captains Leonardo Cota and Jose Alipaz took a force to San Pasqual Valley with the intention to interdict and keep in check Captain Gillespie after his departure from San Diego. Later, Major Andrés Pico, after a failed search for a detachment of U.S. soldiers, joined forces with the captains and took command. These Californios led a force consisting of landowners, sons of landowners, and vaqueros, many with well known and respected family names in the community.

While Machado sneaked into the camp, Lt. Hammond became suspicious he was being set up for an ambush and rode the dragoons into the camp, where they spoke with an Indian they found sleeping in a hut.  In a coincidence that has never been fully explained, a guard under the command of Machado's concunado, the brother of a brother-in-lae and future father-in-law, Captain Jose Alipaz, challenged the dragoons and alerted the camp to their presence. While Machado quickly ran back to Hammond's scouting party, Alipaz sounded the alarm but was dismissed by General Pico, until a U.S. Army blanket and dragoon coat were discovered on the edge of camp by Pablo Véjar. With Capt. Alipaz, Captain Leonardo Cota and José María Ibarra, the Californio standing guard chased the dragoons to the top of the next ridge with the battle cry of "!Viva California!". Pico was alerted, and the Californio camp prepared for the U.S. Army dragoons and marines to attack.

Kearny had planned a surprise attack at daylight, despite the damp weather wetting down their powder and the extremely poor state of the soldiers' equipment and mounts — mostly mules, as the horses had died on the preceding march.

Having lost the element of surprise, at midnight Kearny ordered an immediate advance. It had rained that night. Men, muskets, pistols and equipment were wet and cold, but the troops, after over six months without any action, were eager to engage the Californios. Early in the morning of December 6, 1846, the columnn proceeded by twos across the ridge between Santa Maria, present day Ramona, and San Pasqual. During the descent, while it was still dark and with a low-lying fog, Kearny's force became strung out and were caught in a disadvantageous position by General Pico's swift advance.

Captain Abraham R. Johnston's advance guard, while still three-quarters of a mile from Pico's forces, was ordered by Kearny to "Trot!", which Johnston misunderstood as "Gallop!". Forty of the best mounted pulled far ahead of the main body of the force. The mules pulling the howitzers bolted, taking one of the guns with them. Pico's mounted force remained ahead of the pursuing U.S. forces. Their fresh horses and superior horsemanship allowed them to outmaneuver and lead the advance group of dragoons away from the main force. The Californios had a distinct advantage over the Americans in their knowledge of the terrain. A second separation developed until twenty-eight dragoons, including Kearny, were separated. Damp powder reduced the effectiveness of carbines to clubs and pistols to hammers, as described by a native woman that witnessed the battle. The Californios were armed with long lances and reatas (braided rawhide lariat), which they used with great effect. As a consequence, Johnston's charge was unsupported and his dragoons were forced to withdraw.

As the leading element of the American attack drew close to a Kumeyaay village, the Californios wheeled back and fired their few firearms. At this time Captain Johnston was killed by a bullet. Pico then withdrew a half mile to higher ground.

A second charge ordered by Capt. Benjamin D. Moore further separated the Americans, and the Californios met his dragoons with a counter charge by lancers. The charge was quickly surrounded, and Capt. Moore was killed. Gillespie arrived within fifteen minutes with the artillery. Mules are reluctant to wheel, and the horse-mounted Californios outflanked the Americans and captured one of the unattended howitzers. Gillespie's men unlimbered the remaining howitzer, John Sutter's Russian-made bronze four-pounder. Gillespie used a sabre to fight off a vicious personal attack made by a group of lancers in revenge for his previous actions during his occupation of Los Angeles and the broken agreement to cease hostilities. He took a lance thrust just over the heart that pierced a lung. Either this action (traditional U.S. view) or the unusual degree of bloodshed (traditional Californio view), prompted Pico to withdraw.

The next day, December 7, 1846, after assurances by Dr. Griffin that the worst of the injured could be moved, Captain Turner marched the columnn toward San Diego. Californio lancers established a blocking position near what is now known as "Mule Hill". Captain Turner ordered Lieutenant William H. Emory and a squad of dragoons to engage and drive off the menacing lancers. With dry powder in their carbines, the dragoons easily forced the lancers away, while inflicting five dead among the fleeing Californios. That evening Kearny regained his command, established a strong defensive perimeter and then sent dispatches requesting urgent reinforcements, carried to Commodore Stockton by Lieutenant Edward Beale, Kit Carson and a young Indian guide. Under cover of darkness they each took different routes to the commodore's headquarters at San Diego, 28 miles to the south-southwest. Stockton quickly dispatched a unit of over 200 sailors and marines, whose arrival caused the Californios to disperse. Kearny had already determined the night before, December 9, to continue the march the next morning. Stockton's unit then escorted Kearny's battered troops to San Diego, where they arrived December 12.

Dr. John S. Griffin, Kearny's surgeon, reported that the Americans had lost 17 killed and 18 wounded out of the 50 officers and men who engaged Pico's lancers. They buried the dead in a mass grave on the battlefield. When they arrived in San Diego, the wounded survivors were treated by their Californio guide's sister, Nurse Juanita Machado Alipas de Wrightington, known as the Florence Nightingale of San Diego for her charity work for the oppressed native peoples camped outside San Diego.

General Kearny was promoted for his valiant actions at San Pasqual.

Some time after the battle, General Kearny wrote that the U.S. had achieved victory since the Californios had "fled the field", but the Californios saw the engagement as their victory. The battle is unique, as it was one of the few military battles in the United States that involved elements of the Army, Navy, Marines, and civilian volunteers, all in the same skirmish.

During the late 19th and early 20th centuries, historians debated which force won or lost the battle. Clearly, Kearny retained the battle area, the ability to operate and maneuver, and also the initiative, though his losses were higher. The victor of the battle is still debated. Certainly, these early experiences tempered Kearny's imposition of martial law on the Californio population and established a mutual degree of respect between the population and their new government administrators.