Designed by renowned American architect, Henry Hobson Richardson, the Allegheny County Courthouse was completed in 1888. Built around an interior courtyard, the five-story building was constructed with rusticated granite blocks that meld Syrian, Byzantine, Gothic and Renaissance architectural styles…what has become known as “Richardson Romanesque.” The buildings convey a sense of simplicity, dignity and strength and while the courthouse is still in use, the Old Jail is no longer used as an incarceration facility. Both were added to the National Register of Historic Places in 1973 and designated as National Historic Landmarks in 1976.

The courthouse and jail prior to being enclosed by modern skyscrapers. 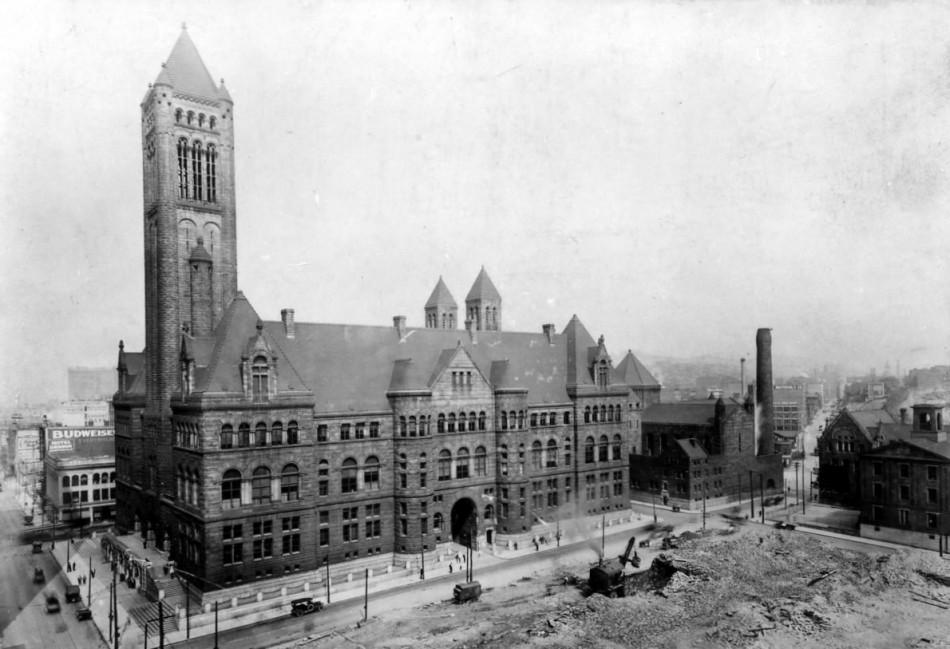 The Bridge of Sighs that connects the courthouse and Old Jail. 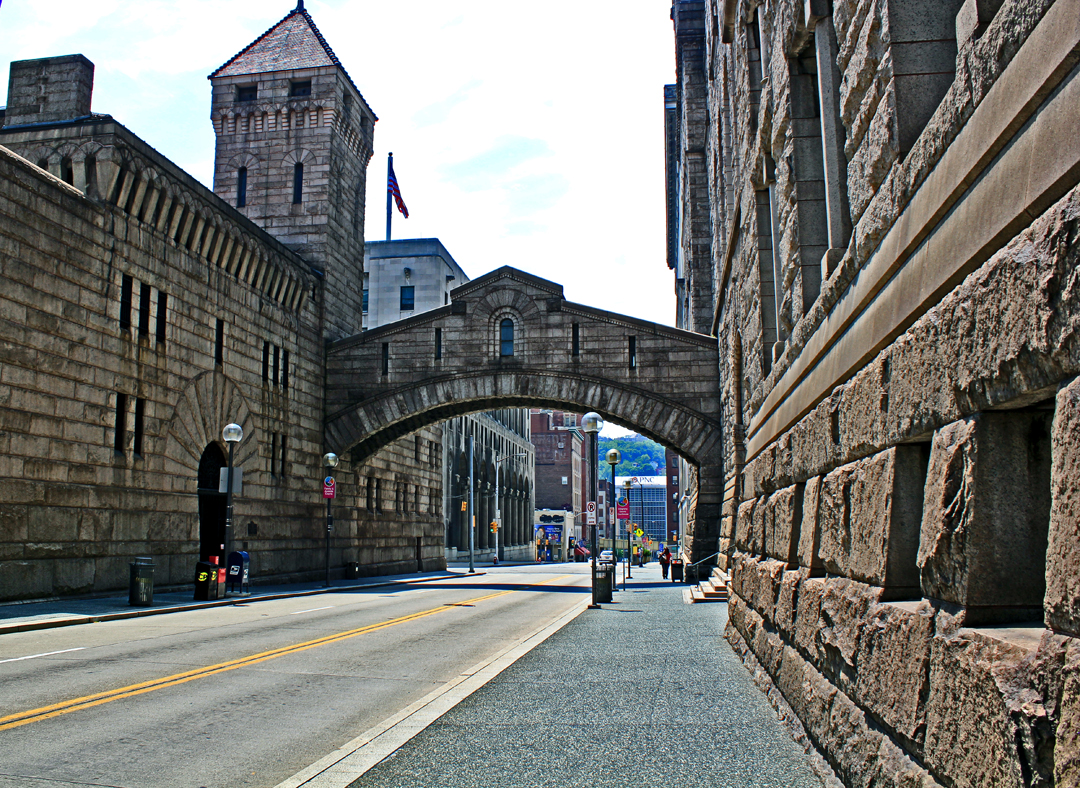 The fountain within the courthouse's courtyard. 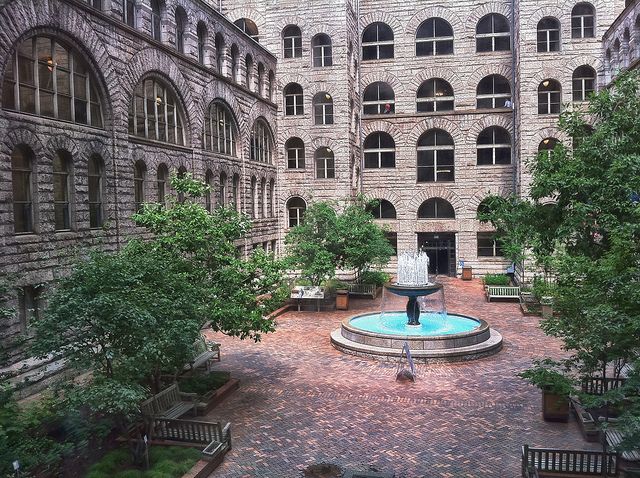 The Old Jail after its conversion. 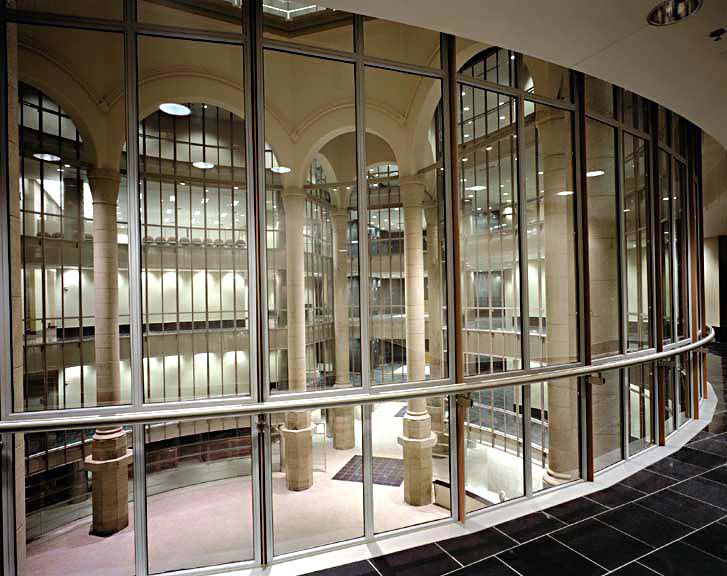 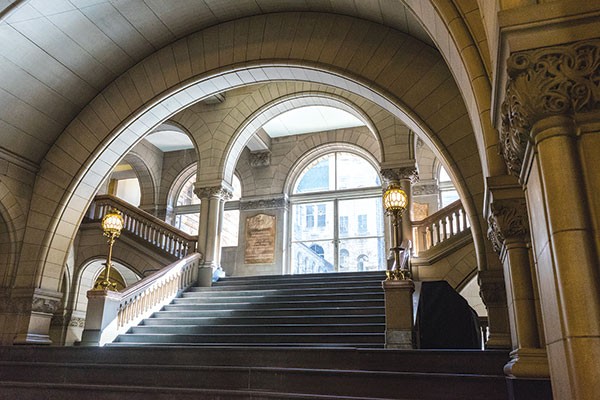 An aerial shot of the courthouse and Old Jail. 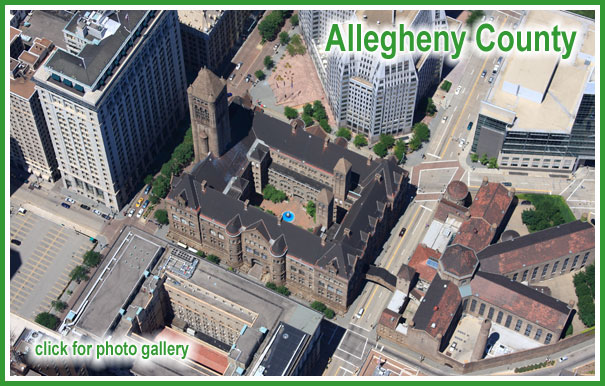 The Allegheny County Courthouse is actually the third one to grace the Pittsburgh cityscape.  The first was a wooden structure built in 1794 and the second, sturdier courthouse was severely damaged by fire in 1882 and soon after razed.  The county then requested designs for a new courthouse and Richardson’s submission was selected in 1883.  Construction on the new courthouse began in 1884, at the same location as the old, and was completed in 1888 (the jail was finished in 1886) at a cost of over $2 million.  Unfortunately, Richardson, who died in 1886, was not around to see the completion of what he considered to be his finest design.

The courthouse features grand, marble staircases, one of which spans four interior stories, large frescos on the walls and ceilings, arched windows and doorways, and ornate woodwork throughout.  Richardson also included a five-story spire that towers over the building proper and was designed to house archival records.  The building’s interior courtyard was designed to permit light and fresh air to reach the interior offices and was, for a time, converted into a parking lot.  It was restored in the late 1970s and now contains a central fountain.

The Courthouse is connected to the Old Jail via a pedestrian walkway modeled after the Venetian Bridge of Sighs and goes by the same name.  It was used to securely transport prisoners from the jail to court appearances and vice versa.  The Old Jail was replaced with a modern facility on Second Avenue in 1995.  The Old Jail has been converted into the juvenile and family sections of the Common Pleas Court.

The courthouse has undergone numerous alterations over the years with the most noticeable being the removal of the large, exterior stairway, at the main entrance, to allow for the widening of Grant Street in 1928.   Visitors now enter the courthouse via the basement which is far from Richardson’s original design.  Many of the courtroom’s high ceilings have been lowered to accommodate modern conveniences, such as air conditioning.  In 2013, the county executive announced restoration and fund raising plans for the courthouse.