The Fresno County Hall of Records was built in 1936 by the Public Works Administration, a New Deal program. The building is considered a fine example of Deco Moderne architecture and is listed on the National Register of Historic Places.

The Fresno County Hall of Records 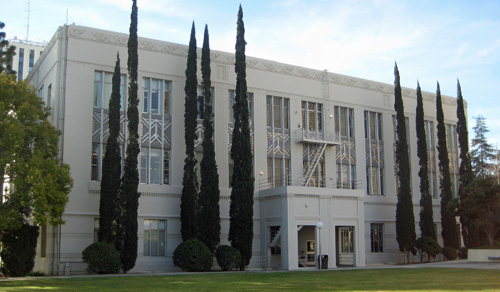 The Fresno County Hall of Records was built in 1936 by the Public Works Administration (PWA) under the auspices of the New Deal. The building is one of several Depression-era structures in Fresno, the most remarkable of which was the Municipal Auditorium.

The building was designed by famed architect Henry P. Villalon and was built in the Deco Moderne style. The building is considered one of the best examples of Art Deco architecture in the city, and a later addition in the mid-1950s was true to the original architecture. A large number of expert craftsmen were employed in the building's construction and their attention to detail is evident; decorative metalwork, terrazo tile, marble, and sculpted water fountains can be found throughout the hall.

The building underwent a massive restoration in the early 2000s. The restoration maintained the architectural integrity of the building and as a result, the Hall of Records is considered to be in excellent condition. It is listed on the National Register of Historic Places.