The Brix mansion was built for Herman and Helena Brix in 1910-1911. It is the only pure Italian villa in Fresno and is listed on the National Register of Historic Places. 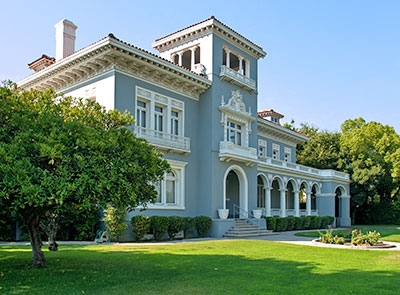 Herman Brix was a German immigrant who came to California in the early 1880s.  He and his wife Helena were among the earliest settlers to the Coalinga area, where they attempted to make a living as grain farmers but failed. Following his failure at farming, Herman Bix went to Alaska during the gold rush and was moderately successful.

Brix returned to the Caolinga area as it was experiencing an oil boom and began to invest in oil properties. The Brixes moved to Fresno in 1903 and began investing in properties there. By this point, Herman Brix was a very successful man in both oil and real estate. He commissioned his home in 1909, and it was built by Edward T. Foulkes.

The mansion is three stories and has 12 rooms.  It was, at that time, the most lavish home in Fresno, with 4,500 square feet of living space. Remarkably, it even included an attempt at a solar water heating system.

The Brixes divorced in 1915, and after that time, Herman no longer lived in the mansion. The home was sold in 1945, and after changing owners several times over the years, it is now the home of law offices. The mansion is listed on the National Register of Historic Places.