For five months in 1910 and 1911, the Industrial Workers of the World, or Wobblies as they were often known, were a presence in Fresno as they tried to recruit Fresno workers for the union. Led by Frank Little, the Wobblies often gathered on the corner of I and Mariposa. Today, a California Historic Landmarks plaque marks the location.

This historic marker commemorates the history of the struggle between labor and management. 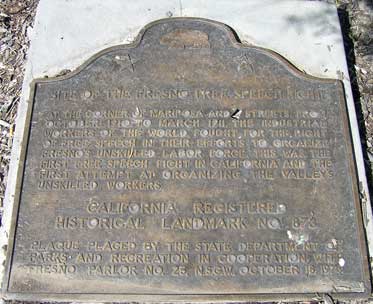 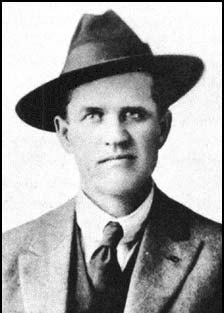 To learn more about Frank Little and the IWW, consider this book from the University of Oklahoma Press. 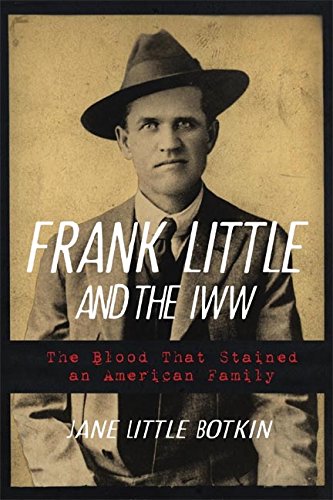 Among the numerous unions that were founded in the late 1800s and early 1900s, the Industrial Workers of the World (IWW) were unique in that it welcomed all workers, irrespective of their race, nationality, or trade. Because they welcomed groups that were frequently marginalized even within the organized labor movement and because they advocated the overthrow of the wage system, the Wobblies, as members of the IWW were known, were considered one of the most radical unions.

In 1910, Frank Little, one of the IWW's representatives, arrived in Fresno to organize the city's workers and to invigorate the IWW Local 66. Little encouraged all of the city's wage earners to join the IWW--seasonal agricultural workers, miners, Chinese immigrants, Latin Americans, and African Americans.

Little's activism, combined with the Wobblies' notoriety, made him persona non grata among city officials. Little found that one effective method of getting the IWW message to workers was by giving soapbox speeches on street corners and parks, and one of the frequent gathering places for Little and workers was the corner of Mariposa and I Streets. And it was there that Little and other Wobblies were often arrested for "vagrancy," an effort by Police Chief William Shaw to get the organizer and other troublemakers out of Fresno.

As the fall of 1910 progressed, Wobblies from throughout the West descended on Fresno, and many of them were arrested. A resolution was passed by the City Council which banned outdoor meetings, effectively prohibiting the Wobblies' street corner gatherings. Little and others chose solitary rather than work in the jail. When numbers of Wobblies loudly sang IWW songs in jail, authorities had the fire department turn fire hoses on them in the winter cold.

In spite of the treatment of Little and the other IWW members, Wobblies continued to arrive in Fresno throughout the winter. They set up encampments at several points in the city, and with both the jail and the city filled with Wobblies, the city finally gave in and rescinded the prohibition of outdoor meetings.

The Wobblies' campaign in Fresno marked the first free speech fight in California. Though the event is little remembered now, the work of Frank Little and other Wobblies in 1910 and 1911 can be seen as a precursor of later movements for social justice, such as the civil rights movement, or the Occupy movement of recent years.