Entering the 1940s, San Diego was a city of 200,000 with little industrial base. World War II transformed San Diego and the rapid creation of Linda Vista played a central role. See the rest of this entry for more on the history of Linda Vista. 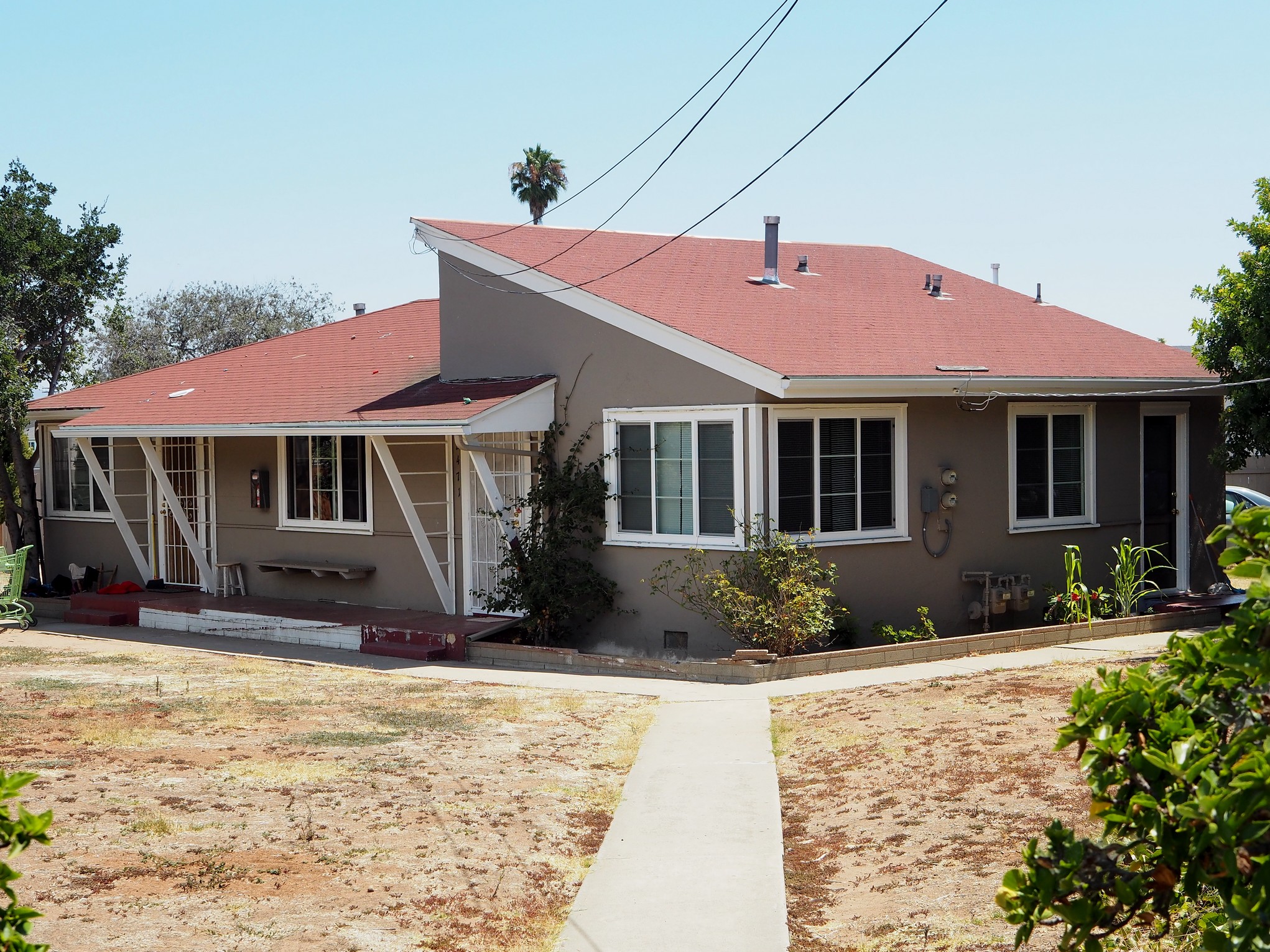 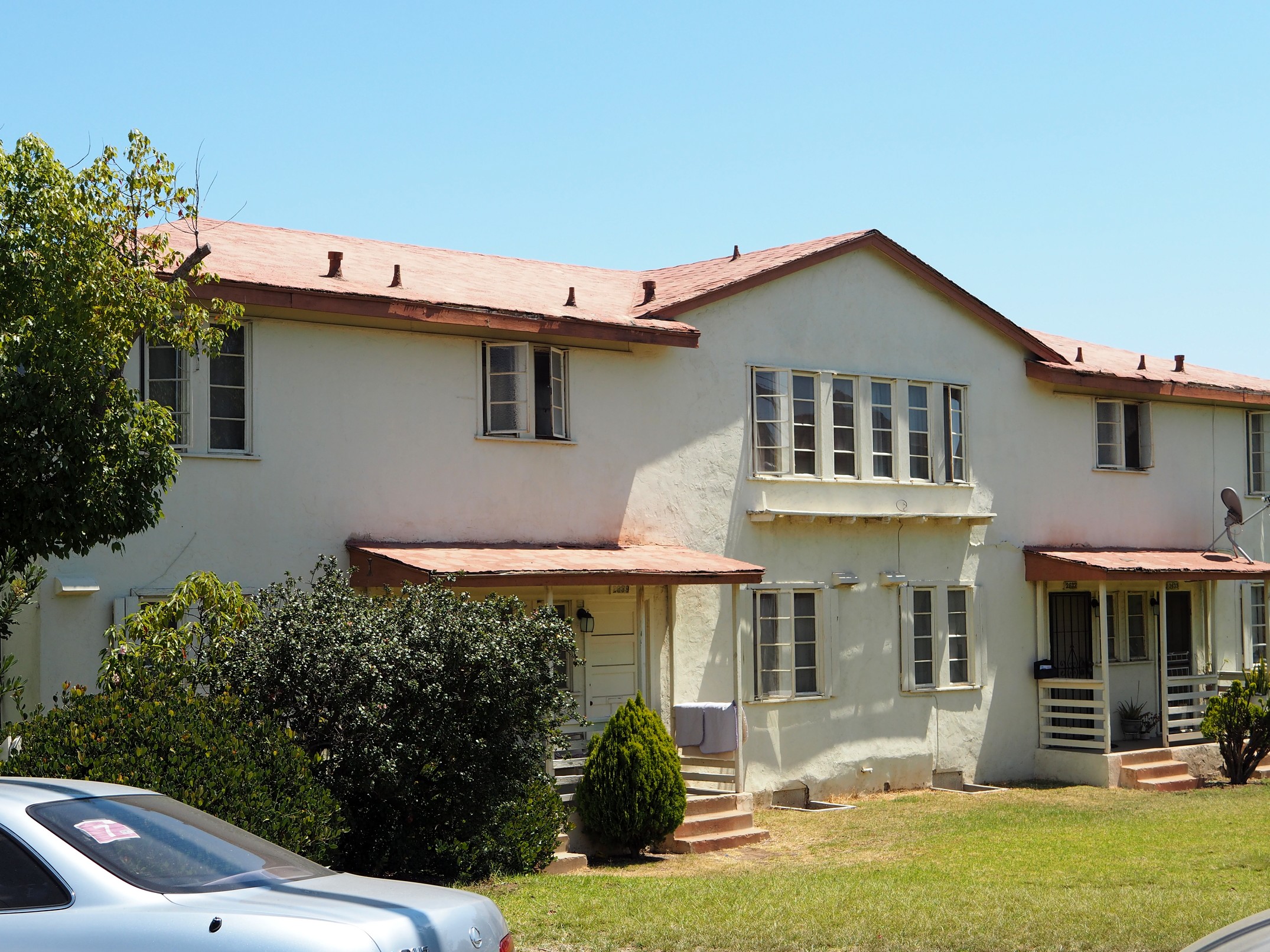 Linda Vista was San Diego’s first major housing development for industrial workers. It expanded the city beyond the Mission Valley boundary for the first time. And it represented a younger, more racially diverse and integrated San Diego than characterized the city at the time.

In 1935, Rueben H. Fleet relocated his Consolidated Aircraft Corporation from Buffalo to San Diego. While the United States didn’t enter the war until December, 1941, US aircraft production was already in high gear in 1939 supplying planes to France and Britain and a readying US military. Consolidated Aircraft was a principal supplier and grew from 874 employees in San Diego in 1935 to 41,000 employees in 1941. Ryan Aircraft and Rohr Aircraft were other major defense manufacturers here.

Single- and mulit-family homes original to Defense Housing Project No. 4002, the 1941-43 development, are seen throughout the two walking tour loops. The examples at this location are typical of the single-family home style.

The combined project architects are identified as Louis J. Gill, Earl Heitschmidt, Charles O. Matchum, Sam W. Hamill, and Blanchard & Maher. Louis J. Gill was the nephew and business partner of Irving Gill. Louis was the lead architect on a number of major San Diego projects including the County Administration Building, the Mission Hills Congregational Church (now United Church of Christ), and a number of projects at the San Diego Zoo.

The neighborhood was modeled on ‘garden city’ town planning principles and Clarence Perry’s Neighborhood Unit Theory, which emphasizes a self-contained community with large blocks and open spaces, a designated service space at the central point, and separation between pedestrian and vehicular traffic. A few public pedestrian paths remain in the area: connecting Thomson Ct. and Upton Ct., Ulric St. and Westinghouse St. at Comstock St, Fulton St. and Eastman St. mid-block, and Eastman St. and Linda Vista Rd. at the pedestrian crosswalk midway along that long block.

The houses were designed by Public Buildings Administration architect C.D. Persina to be functional and simple. The houses share a common floor plan, allowing for low-cost and efficient construction.

Construction was contracted to Los Angeles based McNeil and Zoss Construction. To allow for easy disassembly, two-headed nails were used in the construction of many of the second phases’ “temporary” homes.

The Linda Vista project homes remained federal property leased to tenants for nine years following the end of the war. The Lanham Act which created the project established that the housing was to be temporary, to serve wartime needs. The debate that followed was whether to then turn the property over to the city and commercial interests in some mix or to allow tenants an opportunity to purchase their homes. The tenants organized and won out.

It’s notable that the federal tenant and later disposition process resulted in Linda Vista being substantially more integrated than San Diego, which had racial covenants restricting Black and Hispanic home ownership to Logan Heights and Southeast San Diego. This had the effect of reducing the degree of segregation for the whole of San Diego, in contrast to the re-segregating role that public housing played in many cities.

After a long process, sales of the project homes began on October 28, 1954. Prices and priority were assigned to purchasers based on their residency and military service – another topic of heated debate, as most residents had been civilian wartime factory workers – by then including for the Korean War.

Industry’s demand for aircraft workers far outpaced growth in San Diego’s housing supply. Besides the largely self-contained military outposts, the San Diego economy until then had been substantially built on tourism and real estate, both of which catered especially to Midwestern retirees. The San Diego community and its traditional industries had little common interest with the defense industry’s need to build an unprecedented amount of affordable housing.

The United States Housing Authority was created in 1937 and made funds available to San Diego to build the housing needed for the wartime effort. San Diego rejected offers of federal housing funds in 1939 and 1940. By late 1940, workers were migrating to San Diego at a rate of 1,500 per week, the city population had grown by 50% over two years, and the severe housing shortage was impacting defense production. On October 14, 1940 the federal Lanham Defense Housing Act was passed, overriding San Diego’s obstinacy and contracting for 3,000 housing units to be built on the 12,000 acre coastal sage scrub bluff that is now Linda Vista.

Over 259 days, 3,000 homes and 750 dormitory units were built in Linda Vista, the largest public housing project in the U.S. for a brief time. The project broke ground on February 19, 1941 and twenty families moved into new homes on May 19, 1941. Building continued throughout the neighborhood, with 40 homes completed per day at the peak. A dedication ceremony was held September 9, 1941 and the initial project was completed on November 5, 1941. A second phase of 1,845 “temporary” units was completed in 1943 bringing Linda Vista’s population to 16,000.

City services in Linda Vista were initially strained by the projects’ relationship to San Diego, heightened by the fact that the development was exempt from property taxes. Federal payment in-lieu of taxes to the city began in June 1943. School operations were supported by the federal government starting in September 1941 but funds for construction of school buildings, playgrounds, streetlights, or stores of any kind took longer. It took two more years for those to fully arrive.