Before the arrival of Europeans, Native Americans lived at the mouth of the Miami River for over 15 centuries. The main settlement of the Tequesta Indians was at the site indicated by this marker. The town included six mounds used for a variety of purposes, such as dwelling, burial, and religious rites. The Tequesta had mostly left their territory in the Atlantic coast of Florida by the mid-eighteenth century. 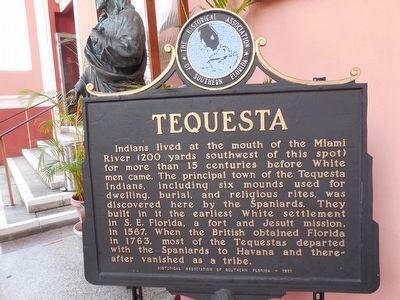 Statue of a Tequesta warrior and family on Brickell Avenue Bridge, Miami 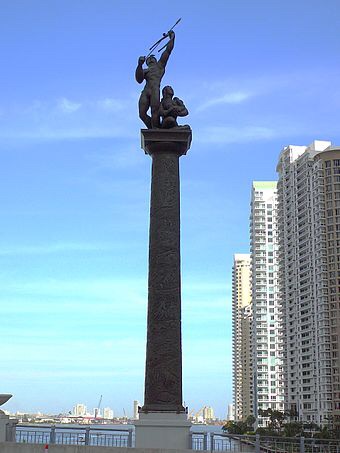 Territory of the Tequesta in the 16th century 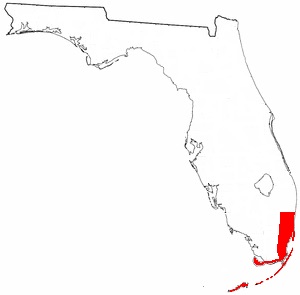 Book about the Tequesta 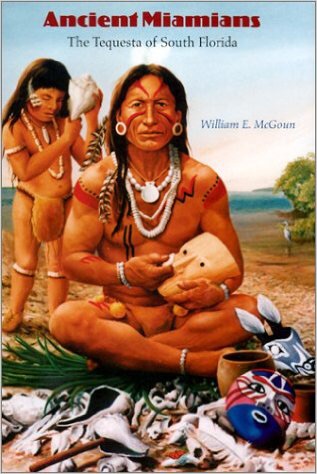 The Tequesta had been living in Southeast Florida since the 3rd century BCE and stayed for approximately 2,000 years. They were gone when the Spanish traded their Florida territory to the British. When Europeans first came into contact with the Tequesta, it is estimated that the tribe numbered between 800 to 10,000. The Jaega, located immediately north of the Tequesta, were strongly allied with the tribe. However, the more dominant group in the region was the considerably larger tribe called the Calusa, who numbered somewhere between 2,000 and 20,000.
Little is known about the Tequesta language, as only ten words from the language are recorded with meanings known. The Tequestas were not agrarian. Instead, they fished, hunted, and gathered local plants to eat. The Tequesta lived in huts and because of Florida's warm climate wore minimal clothing. Men typically wore a loincloth made of deer hide and wore skirts made of Spanish moss or other plant fibers. Tequesta men consumed a ceremonial drink called cassini during special rituals. According to some accounts, when a Tequesta chief died the leader's body and small bones would be buried while the larger bones would be separated and placed in a box for the Tequesta people to worship as gods. Other accounts say that the chief's flesh was stripped from the bones, the flesh burned, and then the bones given to the chief's family.