The Huntington Building, also known as the Consolidated Bank Building, was constructed in 1925-1926. It came, like many other downtown Miami buildings, at the height of the Florida Land Boom of the 1920s. The Huntington Building was created by real estate developer Frederick Rand, who sought to develop Northeast 2nd Avenue into a substantial downtown center. It is noted particularly for eleven knight statues that occupy the rooftop, giving it a unique appearance. Today the Huntington Building houses offices and condominiums.

The Huntington Building sometime after its completion. Image obtained from the JSK Architectural Group. 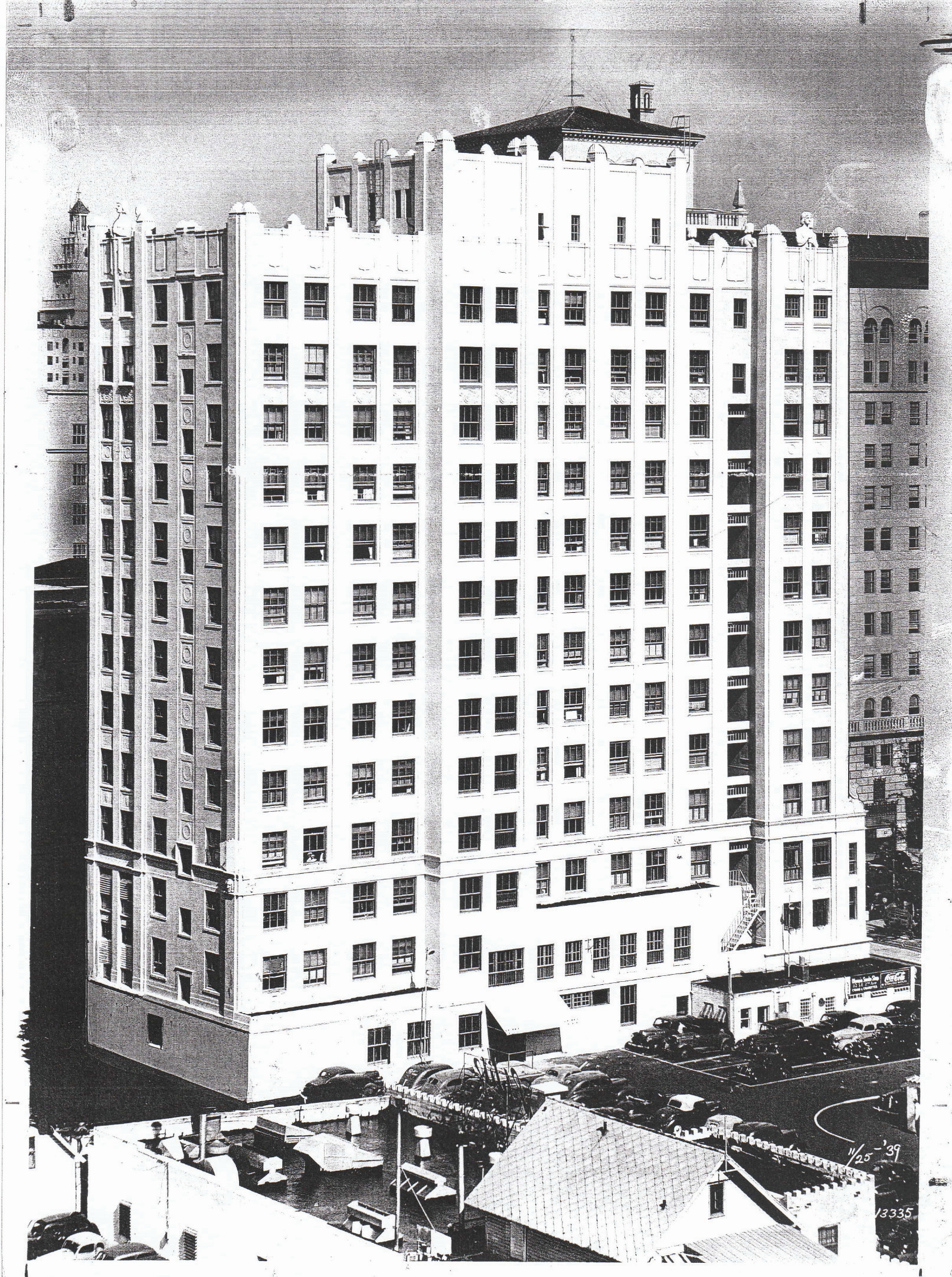 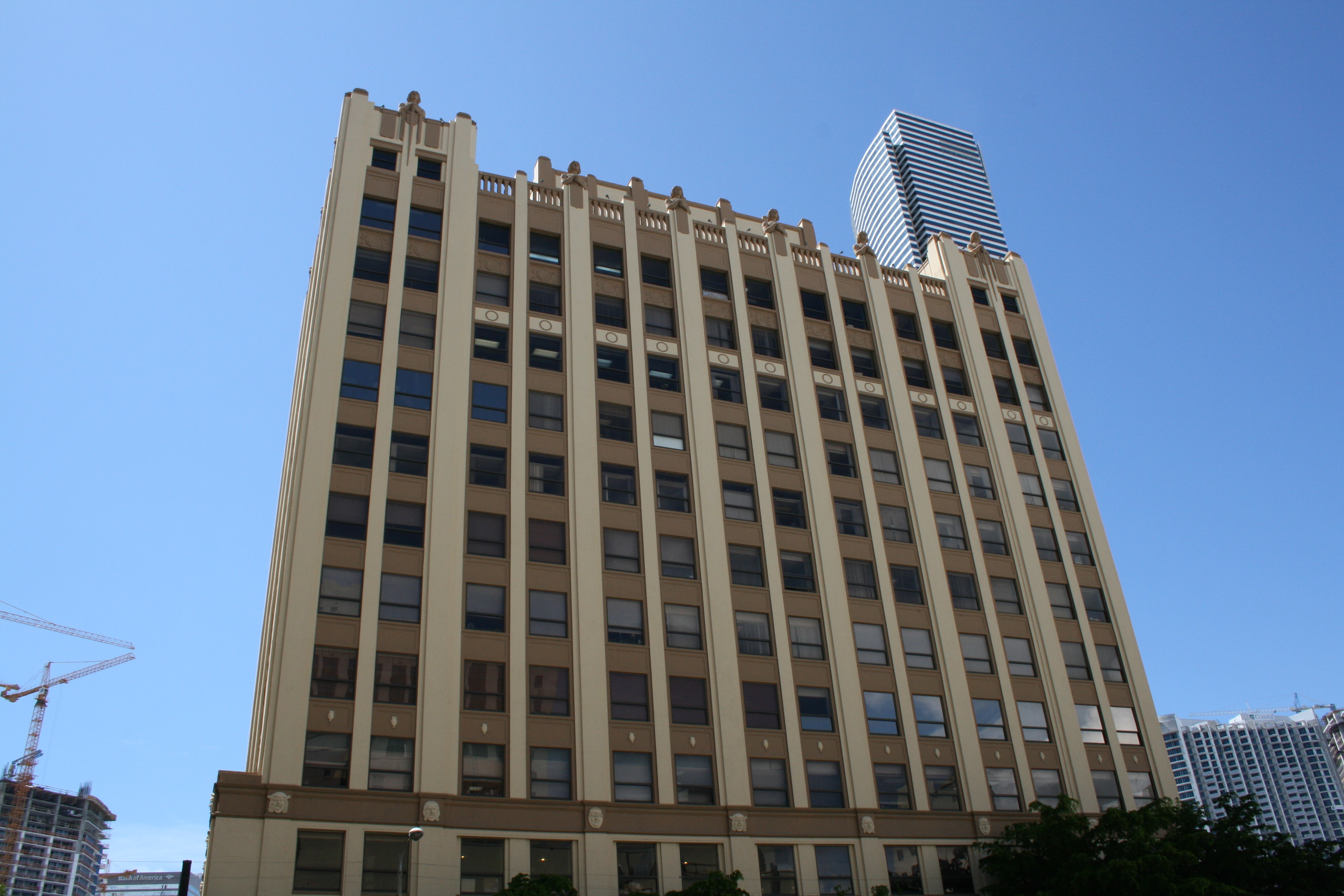 The building is known for its eleven knight-like figures decorating the parapet. Image obtained from Flickr. 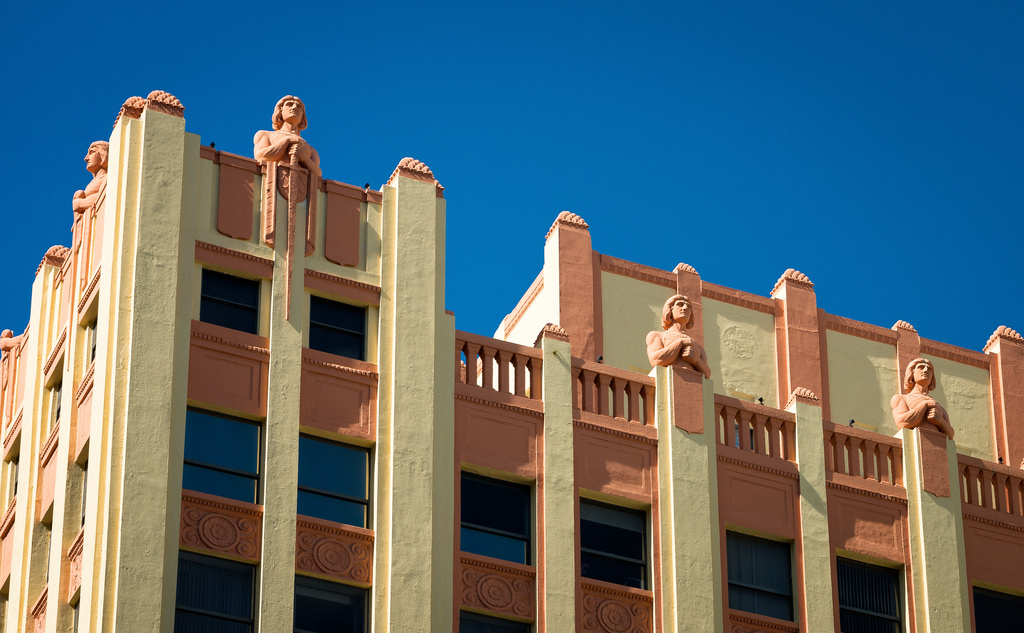 During the 1920s, Florida experienced the phenomenon known today as the Florida Land Boom. It was a period of mass migration, development, and land speculation in the Sunshine State. Land prices and property values skyrocketed as Florida was inundated with investors seeking to profit off the hundreds of thousands of people moving to the state. With available land soon becoming scarce, high-rise buildings began to be built in Miami’s downtown area. The mid-1920s saw the construction of prominent commercial buildings such as the DuPont, Ingraham, and Congress Buildings. In 1925, at the peak of the land boom, construction began on a new building created by Frederick Rand.

Frederick H. Rand was an attorney-turned-real-estate-developer who left Orlando and moved to Miami in 1916. He became very successful, developing subdivisions such as Broadmoor, Edgewater, Miramar, and Highland Park. Rand also acquired all the land on Northeast 2nd Avenue from Flagler Street to 14th Street. He planned to develop the area into a “Fifth Avenue” and make it a prosperous downtown center. The implementation of his project began in 1925 with the construction of the Huntington Building and Roosevelt Hotel. Rand’s plans subsequently came to an end however, after a hurricane in 1926 left Miami badly damaged and hastened the end of the Florida Land Boom. Frederick Rand would later go bankrupt when the Great Depression began.

Construction of the Huntington Building began in 1925 and was completed in 1926. It was named after Frederick Rand’s sister, Elizabeth Huntington Rand. The primary architect of the building was German-born Louis Kamper. While the majority of his designs were in Detroit, he is known for designing the Huntington Building as well as the Roosevelt Hotel. The Miami-based firm of Pfeiffer and O’Reilly also served as associate architects. The thirteen-story building was designed in the Commercial style, rare for downtown Miami. The exterior was given much detailing, and boasted a unique roofline decorated with eleven statues of knights. Four statues of winged griffins were included originally but later removed. At one point, the knights were each painted a different color and illuminated in the evenings. The building has been renovated a few times, including in 1943 and 1976, however the original exterior remains mostly intact. In 1983 it was designated a city historical site, and in 1989 it was added to the National Register of Historic Places. Today the Huntington Building houses offices and condominiums.